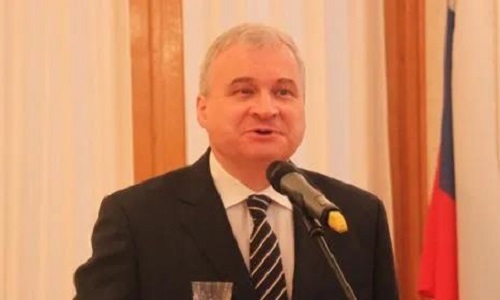 Russian Ambassador to China Andrey Denisov expressed his confidence in China's capability to build a high-speed railway between the Chinese mainland and Taiwan, and said he's looking forward to taking a high-speed train to visit the island some day, in an interview with Hong Kong-based Phoenix TV on Tuesday.

"I have never been to Taiwan Province. If I could have a chance to visit Taiwan Province, of course I prefer to do it by train," Denisov said when asked whether he would like to take the high-speed train to Taiwan if it is completed.

Taking the Guangdong-Hong Kong-Macao Greater Bay Area as an example, Denisov said that China is fully technically capable of completing the high-speed train project across the Taiwan Straits.

He also stressed in the interview that both sides across the Taiwan Straits belong to China.

This is the seventh time he has attended the two sessions as an ambassador. Denisov's reference to Taiwan as a province of China won praise from many Chinese netizens, who believed it shows the common understanding among the international community that there is only one China in the world and Taiwan is an inalienable part of Chinese territory.

Many also expressed their willingness to go to Taiwan by high-speed railway.

China recently released its latest guidelines on a National Comprehensive Transportation Network Plan, which set out its construction goals from 2021 to 2035. A potential cross-Straits high-speed railway line sparked heated discussion on social media.