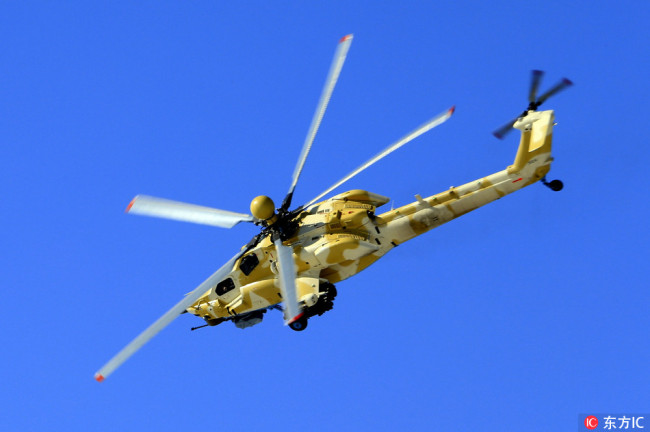 A Mil Mi-28NE attack helicopter performs a demonstration flight at an aerodrome in the city of Bataisk. (File Photo: IC)

Russian Helicopters is open to a broad range of cooperation with Chinese counterparts, the company's director general Andrey Boginsky has said.

"Chinese aviation companies have traditionally been our key partners. We are connected, in my opinion, by strong professional and friendly partnership relations," he told Xinhua in a recent interview.

Boginsky said Russian and Chinese helicopter makers are at the final stage of negotiations to create a heavy helicopter and he hopes that the work will be concluded this year.

"The cooperation is quite extensive. The qualifications of Chinese colleagues, in our opinion, are quite high," he told Xinhua during the Army-2018 defense exhibition near Moscow that ends Sunday.

"We might work jointly on projects of other helicopter projects depending on the needs of the Chinese market. We may also discuss using certain Chinese-made components in Russian helicopters," he said.

He said Russian Helicopters, part of the Russian high-tech conglomerate Rostec Corporation, will participate this year in the aviation exhibition in China's Zhuhai in early November.