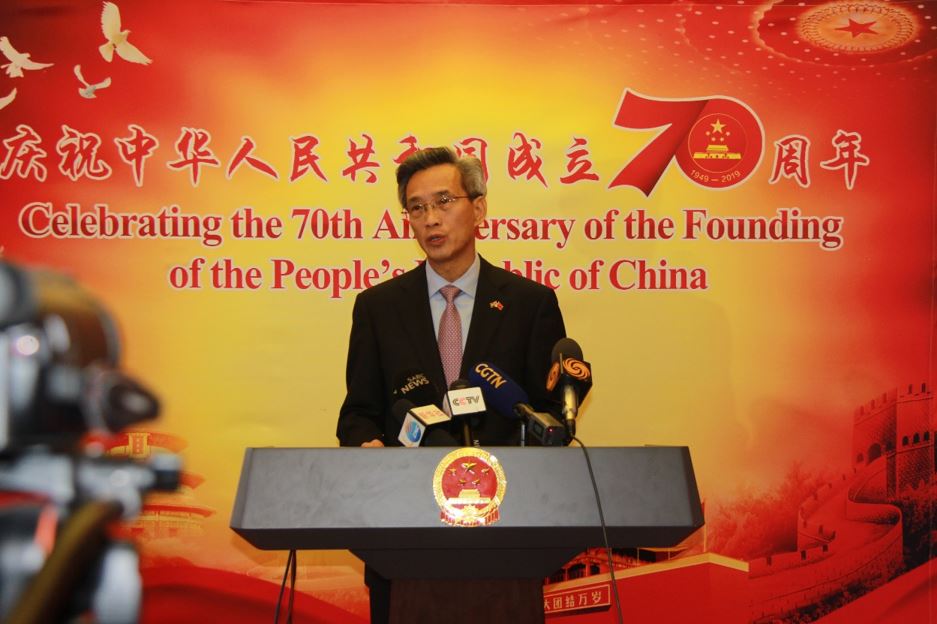 Chinese Ambassador to South Africa Lin Songtian at the 70th anniversary of the founding of the People's Republic of China celebrations in Pretoria. (Photo: People’s Daily)

The Star, Pretoria News, and Business Day ran the letter one day ahead of the opening of 2019 China International Import Expo (CIIE).

The complete text is available here:

Sharing Development Opportunities Through Opening Up

As South Africa will host the second Investment Conference, the second China International Import Expo (CIIE) will also be held in Shanghai on 5-7th November. These two grand events not only are a coincidence of timing, but also highlight that China and South Africa, as two major emerging markets, firmly support trade liberalization and economic globalization, and demonstrate our two countries’ solemn commitment and concrete actions to open up our markets to the world.

As a pioneering undertaking in the history of international trade, the CIIE is the world's first ever state-level import expo. The first CIIE held in Shanghai in 2018 achieved great success, reaching deals worth of $57.8 billion. Its unprecedentedly large scale, high-end expo and fruitful outcomes have been universally acknowledged by the international community. Many of the high-quality products and services introduced into China through the first CIIE not only meet the market demand for upgrading consumption and expanding imports in China, but also enable the rest of the world to share the market opportunities of China’s efforts to expand opening-up and promote cooperation.

The second CIIE, building on the success of the first one, will be larger in scale, better in quality, more innovative and high-end, thus holding a promising future. The World Trade Organization, the United Nations Conference on Trade and Development, the United Nations Industrial Development Organization, the United Nations Development Program, the Food and Agriculture Organization of the United Nations and the International Trade Center are all the cooperative partners of the second CIIE. Up to now, more than 170 countries (regions), international organizations, over 3,000 exhibitors and more than 500,000 purchasers have signed up for the event, covering such areas as manufacturing, trade, services, e-commerce and cross-border platforms. The number of participating enterprises and the number of the participating world top 500 and industry-leading enterprises have both exceeded the first CIIE.

The second Hongqiao International Economic Forum will be held on the sidelines of the second CIIE. Themed “Opening-up and Innovation for Win-Win Cooperation”, this year's Forum features higher level, updated topics, a wide range of activities and greater popularity. More than 3,000 representatives, including heads of state and government from many countries as well as international organizations such as the WTO, the UNCTD, the Asian Infrastructure Investment Bank and the ITC will attend the Forum upon invitation to hold discussions on such major issues as promoting economic globalization and building an open world economy for common development.

The huge success of the first CIIE and the unprecedented representation of the second CIIE with widespread global influence fully demonstrate the world's confidence in China's reform and opening-up and its economic prospects, as well as the world’s expectation to embrace the opportunities generated by the Chinese market. According to a report by the CNBC website, the China-US trade frictions did not dampen the US companies’ enthusiasm and interest in the Chinese market. Last year, more than 170 US companies participated in the first CIIE with an exhibition area of over 36,000 square meters, ranking among the top three. This year, the US companies are even more active in signing up for the event, with the exhibition area enlarging by 35%.

The CIIE is not a solo of China, but a chorus of the world. Our goal is to “buy from the world and benefit the world”, provide effective channels for  the goods, technologies and services from other countries to enter the Chinese market, build an open platform for all countries to strengthen cooperation and exchanges and engage in international trade, and offer international public goods to promote economic globalization.

After more than four decades of rapid development through reform and opening-up, China has become the largest industrial country, the largest trader in goods, and the largest holder of foreign exchange reserves in the world. With 1.4 billion Chinese people and 400-million middle income population, China will soon become the world's largest consumer market. In the next 15 years, China's imports of goods and services will exceed $30 trillion and $10 trillion respectively. More importantly, China always pursues the policy of opening-up and has become the largest trading partner of more than 100 countries, providing a huge market and immeasurable opportunities for the world.

In order to put its own interests first and make itself great again, some country pursues protectionism and bullying and launched global trade wars, which has dealt a heavy blow to the multilateral free trade system. Against such background, it is of great significance for China to hold the second CIIE. It speaks volume about China’s firm commitment as a responsible major country to win-win cooperation for common development, but also the international community's resolve to opposing trade protectionism, and promoting international trade liberalization, investment facilitation and economic globalization.

Openness has always been the hallmark of contemporary China. The CIIE is a landmark measure taken by China to promote a new round of high-level opening-up. It shows that China will never cease the process of reform and opening-up in the new era. As President Xi Jinping said, “China's door will not be closed--it will only open still wider”. China will continue to open wider to the outside world and welcomes all countries, especially South Africa and other developing countries in Africa, to get onboard the express train of China's economic development.

China-South Africa trade and economic cooperation has been growing vigorously and achieved fruitful outcomes, with the scale and areas expanding and the models more diversified. China has remained the largest trading partner of South Africa for ten consecutive years and South Africa has remained the largest trading partner of China in Africa for nine years in a row. South Africa is the first African country to export its beef to China and its export of mineral products, fruits, wine and seafood to China has been increasing rapidly. The Chinese government has taken a series of positive steps, such as taking the lead in lifting the ban on South African beef exports to China and sending a large government economic and trade delegation to South Africa, with the aim  to proactively open up its market to South Africa and encourage South Africa to export more new products to China, which have been warmly welcomed and echoed positively in South Africa.

The CIIE has become a new important opportunity for South Africa to expand its exports to China. The first CIIE held in 2018 received positive response and was actively participated by South African enterprises. High-quality South African products and services such as wine, tea, seafood, cosmetics and mineral products were displayed in the Chinese market and well-received by the Chinese consumers.

China welcomes the participation of the South African government and business community in the second CIIE and more high-quality South African goods and services to enter the Chinese market. I am glad to see that Deputy Minister of Trade Industry and Economic Development Department Nomalungela Gina will lead a South African government delegation composed of more than 60 members to attend the second CIIE in Shanghai. Over 60 South African companies will participate in the Country Exhibition and Business Exhibition. The Business Exhibition covers an area of more than 300 square meters and the numbers of both the South African exhibitors and exhibition area rank first among the participating West Asian and African countries, covering such fields as agricultural products, food processing, finance, jewelry and equipment manufacturing. The South African companies will also participate in the 20-plus side events including the exhibition products promotion and trade fair.

It is our firm belief that the second CIIE will provide a broader platform for South African companies to enter China’s huge market and we wish the South African participating companies could achieve better sales performance and win-win cooperation for common development.

In his keynote speech at the opening ceremony of the first CIIE, President Xi Jinping pointed out that “the CIIE, an event to be held on an annual basis, will feature good performance, good results and continued success in the years to come.” China is ready to take the CIIE as an opportunity to work with other countries to build an open and win-win world economy, share our development fruits and opportunities, and make greater contributions to building a community with a shared future for mankind.