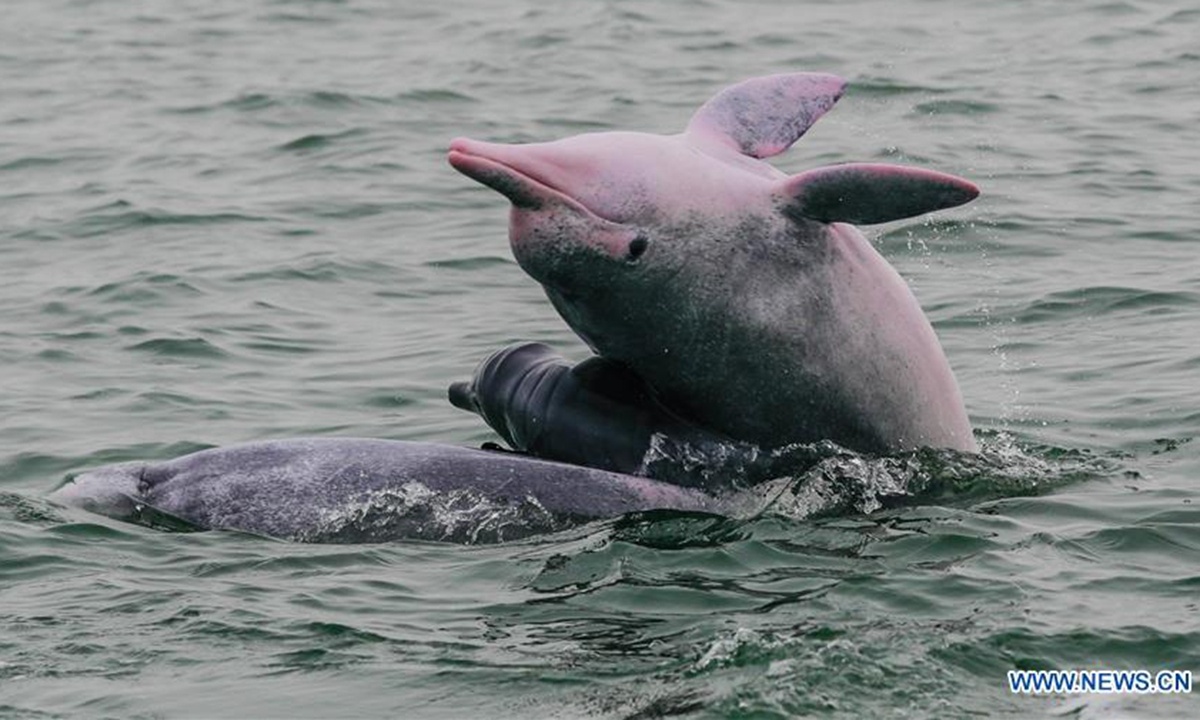 Driving a mini speedboat and shuttling back and forth across the sea, Lin Qiang was apparently searching for something.

He would occasionally stop the boat and look around with a telescope, hoping to catch a glimpse of the familiar white aquatic creature.

"You must be patient, and sometimes need a bit of luck to see the Chinese white dolphins here," said Lin.

Lin, 52, is a native of Sanniangwan Village in the city of Qinzhou, south China's Guangxi Zhuang Autonomous Region. Born into a fishing family about 100 meters away from the sea, he seldom thought of picking up another career earlier.

In 2004, a scientific research team from Peking University established a center for the conservation of Chinese white dolphins in the village, allowing Lin to wave goodbye to the family's old business as he joined the research team.

His job is to ferry researchers, help with GPS orientation and record the depth and temperature of the water.

"Though I make less money than fishing, it's worth contributing my share to protect the dolphins," Lin said.

Located along the Beibu Gulf in the South China Sea, the Sanniang bay is dubbed the "hometown of Chinese white dolphins."

The endangered species is under first-class state protection in China and was included on the International Union for Conservation of Nature (IUCN) Red List of Threatened Species in 2008.

"There were just about 96 white dolphins in the area in 2004, but the number has surged to more than 280 now," said Pan Yue, a researcher at the center.

Another good news is that researchers can see new white dolphin cubs almost every year, a sign of population persistence.

Pan said the dolphins generally live in shallow waters less than 10 meters deep in the sea, and the Sanniang bay, which is home to a rich variety of plankton, fish and shrimps, has been a safe and suitable breeding ground for them.

"More importantly, human activities are less in this area, providing a sound and stable ecosystem to the rare species," Pan added.

Qinzhou is an important port connecting Guangxi and ASEAN countries, and its location is highly beneficial, granting the city tremendous advantages in economic development. But the city has made it clear that urban development should give way to ecological protection.

In 2005, the construction of an industrial zone at the port was moved westward from the original location to ensure the dolphins are left undisturbed. In 2009, a new road was built that served as the "red line" to separate the port and the bay protection area. Besides, a project with an investment of billions of yuan within the red line was also halted.

"Thankfully, awareness of dolphin protection has significantly increased among the locals," said Pan. "Dolphins used to be viewed as enemies, as they were competing for fishery resources with locals. Now local residents know that protecting the dolphins is akin to protecting humans."

"The population of Chinese white dolphins is expected to exceed 500 in 35 to 40 years, provided the local ecological environment don't change much," said Pan.