CHINA Sailing a wave of destiny on a sea of adventure

Sailing a wave of destiny on a sea of adventure 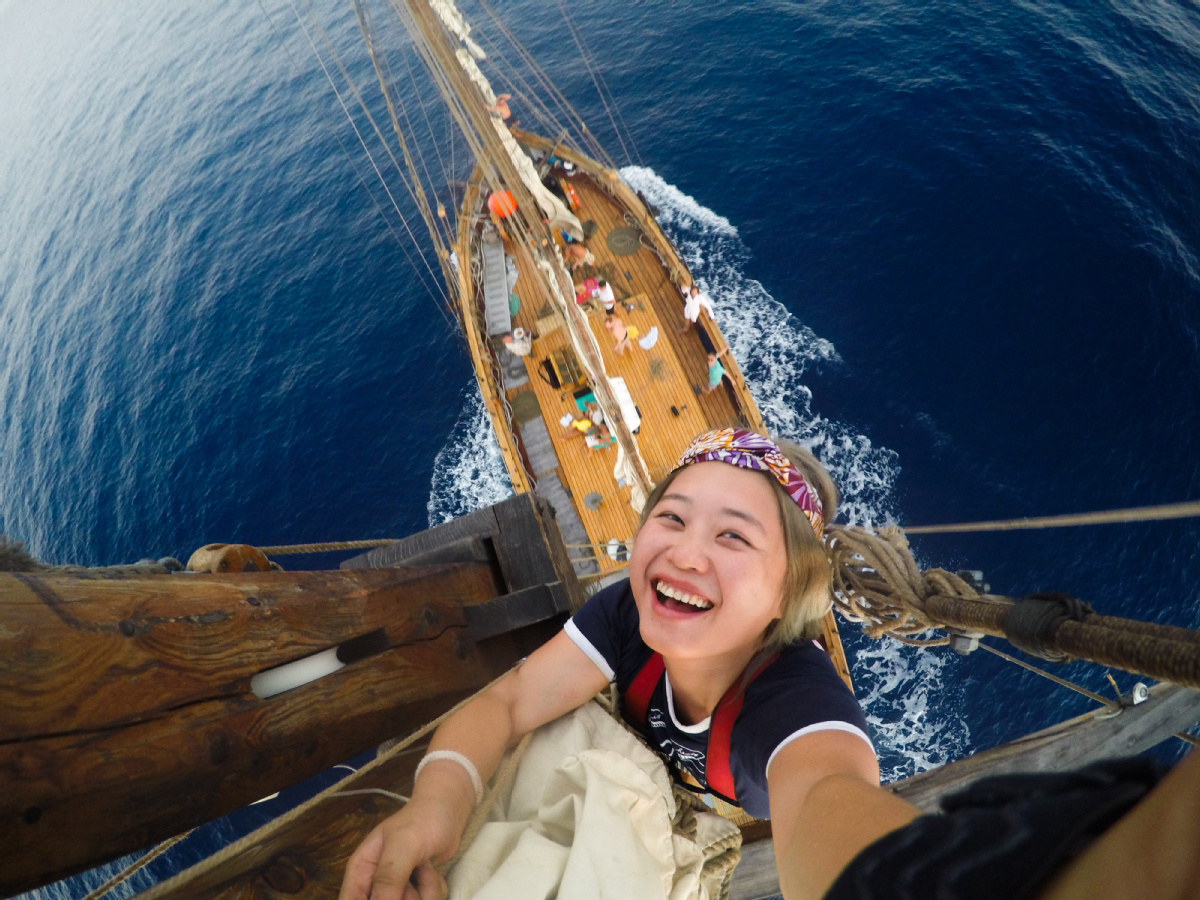 Li Erni takes a selfie on the mast during a sailing project she embarked on with a group of artists in the summer months from 2014 to 2016. (Photos: China Daily)

A sail swollen by the wind. Life on the ocean wave. A sense of adventure, more akin to Homer's Odyssey than to life in the 21st century.

Li Erni, whose life motto is to be adventurous and explore the world, has been on a journey where the elements of nature are not dimmed by technological prowess, such as satnav.

It's an experience she wants to keep on repeating.

"Navigation on an ancient boat is different from boarding a liner, it is more a way to return to nature, understand traditional maritime culture and enjoy adventure", said the 30-year-old, who pursues a life of passion, romance and freedom.

Li's sense of adventure can be traced back to a Greek poem she happened to read at high school: "As you set out for Ithaka, hope the voyage is a long one, full of adventure, full of discovery."

The legendary Greek island is the home of Odysseus, and the poem spoke of the importance of enjoying the trip. It's a metaphor, she believes, that can be extended to many of life's processes.

As You Set Out For Ithaka is also the name of a documentary she is making, which tells her story of three years navigating the seas in Europe with a group of artists during the summer months from 2014 to 2016.

"It tells of a mythical journey I embarked on, in the process I had adventure, experienced a new life and discovered my inner strength," Li said.

Li has multiple identities: a film director, a photographer, a writer. And all of this can be linked to her time sailing six years ago.

In 2014, when she was taking photographs at an art festival in France, she was attracted by the introduction of a social and artistic collaborative project initiated by the European Union.

The project, Meeting the Odyssey, rallied a group of artists and organizers from different European countries to sail from the Baltic to the Mediterranean Sea during the summer months from 2014 to 2016, giving workshops and performing theater pieces.

When she heard about the project she was reminded of the poem immediately, and as a fan of an adventurous Japanese video game series named Uncharted Waters, Li could not wait to apply for a seat on the boat.

"I was excited because Odyssey was turning into reality for me," she said. 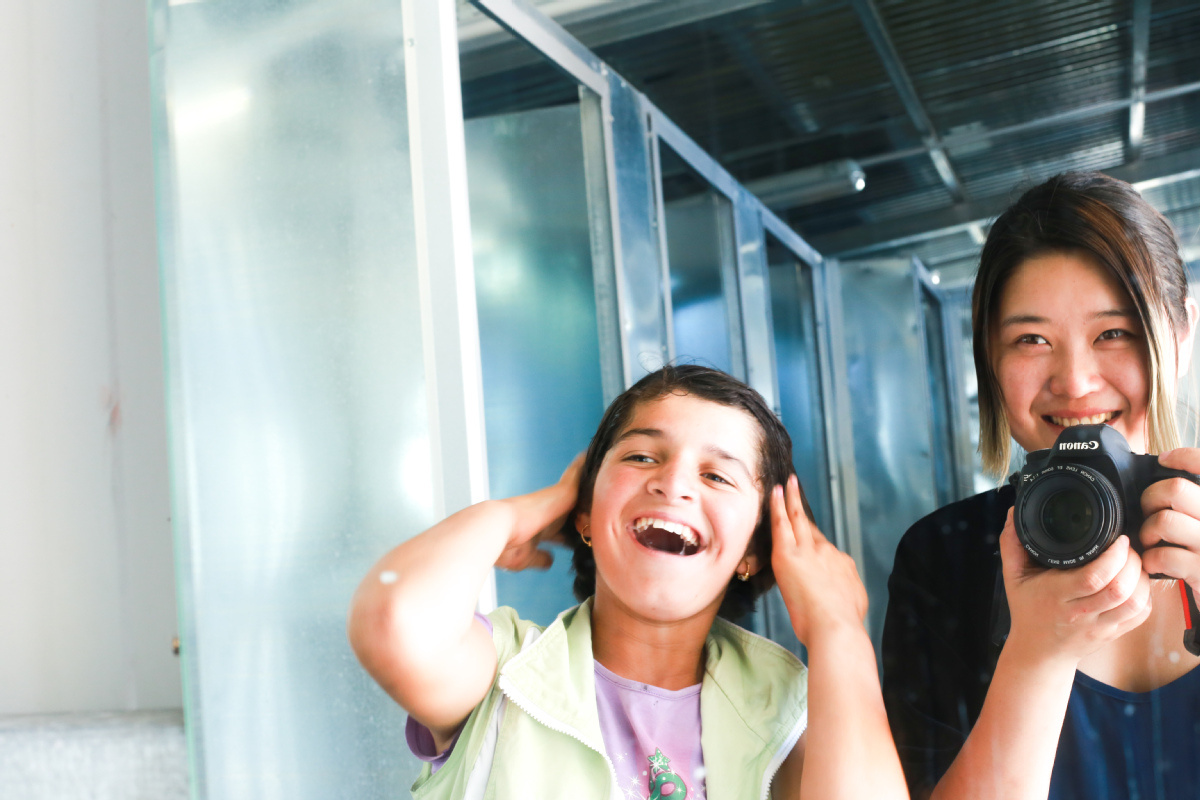 Li Erni shoots photos with Ruby Sio, a girl from Iraq, in a refugee camp on Lesbos island, Greece.

However, her application was refused. But she was determined to overcome this setback and kept in touch with the organizers.

Fortunately, her experience, hitchhiking from China to France to study in her 20s, impressed an Italian director, who was one of the organizers of the project.

"He told me we share the same view about the world－a world of freedom, openness and without boundaries," Li said.

In the summer of 2014, Li became the first and only Chinese national to join the team as they embarked on the artistic voyage.

The proud sailing ship, Hoppet, a century old, took the group, a total of over 100 people, to islands and cities in 14 countries during the three years.

Sailing also allowed her to learn to define wind speed and direction, and enhanced her knowledge of astronomy and geography.

When looking at the starry sky, she said the boat seemed to sail straight into the stars.

The journey gave Li a chance to be in close contact with nature. The sense of vastness of the universe made her feel humble, she said.

"When opening Google maps, I could only see a small dot, which indicated my position, flashing in an endless blue," she added.

Li realized the journey was a refreshing experience to work and live with a group of friendly and brave international artists, poets, anthropologists, scientists and sailors from different cultures for a long term.

The boat was like a micro-society and had its own strict rules: everyone has a duty and should follow the captain's orders.

"There is no class or identity distinction, no matter who we are on land, we are equal here, everyone has a job to do", Li said.

During the voyage, Li wrestled with the moody ocean and unpredictable weather; She danced and sang with the crew; slept in a warehouse in the scorching summer heat when docked in Malta, and performed art therapy in a refugee camp in Greece.

The visit to the camp on the Greek island Lesbos in 2016 left a strong impression. The camp was a refuge for children and youths from Afghanistan and Iraq. The artists were able to bring positive energy and hope to those who were seeking a better life.

She spent days with Ruby Sio, a young refugee girl from Iraq, teaching her how to shoot photos and bringing her to their theater workshop.

The girl brought "gifts" to Li everyday: putting fruit and vegetables quietly in her bag.

"I was struck by the strong love from a stranger for the first time," she said, adding that the young girl's friendship was like a treasure.

Her experiences during the voyage were the subject of a book published in 2017.

Now she is using her lens to tell of her adventures.

After the end of the journey in 2016, she began to raise money and even went to Taiwan to look for help with the documentary's postproduction.

Li also recruited about 600 volunteers to help her translate the footage with more than 15 languages spoken.

"I hope the film can be finished this year, and be aired on big screens in 2021," she said.

From being seasick initially to becoming an experienced deckhand and sailor, Li's passion and bravery gave her the chance to see a more extensive, powerful and dynamic world, as well as discovering more about herself.

"We should remain curious, discover the desire in our heart and take action to explore the outside world, experience adventure and go through all challenges," she said.

She added that if not for the COVID-19 pandemic, she would set off on a journey this year.

Instead, Li established an online community of adventure to share her stories with others, set small challenges and feasible goals for them to accomplish and built a communication platform to help reduce anxiety during the quarantine period.

"It would be great if my sharing could inspire even just a few people and encourage them to create their own life."

"Limitations are everywhere," she said. "The key is to define your inner desire and be brave to break the chains and live up to the life you really are looking for," she said, adding that what is needed is an adventurous spirit and action.