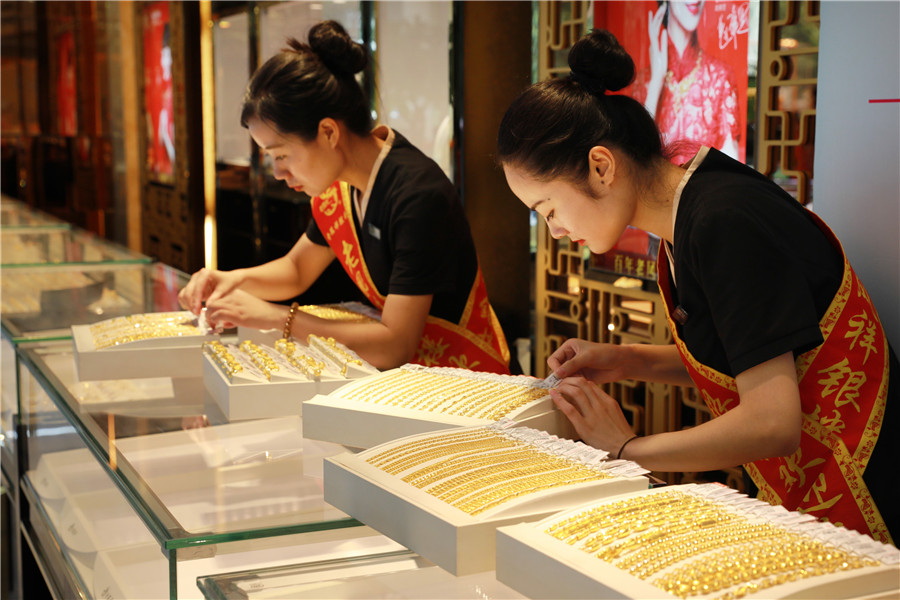 Sales of gold jewelry have been booming during the first few days of the National Day holiday break, boosted by a festive shopping mood, a busy wedding season and an upward growth trend of gold prices.

The weeklong break, also known as the Golden Week, appears to be a golden business opportunity for retailers. The sales value of gold jewelry during this period can be twice or even three times higher than during a regular week, and many retailers are offering discounted prices to attract more consumers, industry experts observed.

For instance, Dongshan Shopping Mall in Guangzhou, Guangdong province, launched a sales promotion for gold ornaments during the break. For every gram of gold, which sells at around 450 yuan ($62.9), the mall will deduct 70 yuan.

Gold sales are expected to accelerate through the end of the year due to weakening global economic conditions, said Mike McGlone, a Bloomberg Intelligence senior commodity strategist.

As of Wednesday noon, gold prices stood at $1,498.93 per ounce on the back of weak US manufacturing data. The precious metal continues to be a traditional safe-haven for investors amid economic uncertainties.

In the first six months, gold consumption in China reached 523.54 metric tons, down 3.3 percent year-on-year, with a declining consumption of gold bars and coins.

Yet, the spending on gold jewelry during the period has increased steadily. About 359 tons of gold were sold from January to June, edging up 1.97 percent year-on-year, according to the China Gold Association.

"The price of gold is expected to hit $1,650 per ounce by the end of the year and about $2,000 per ounce next year," said Jin Xiao, a researcher at Orient Futures.

Separately, with a large number of newly married couples and others who moving into new homes during the holiday break, home appliance retailers have seen burgeoning sales in early October.

JD.com, a major Chinese e-commerce platform, launched multiple new styles of home appliance products such as refrigerators and washing machines during the break.

"With higher income and spending power, quality-conscious young Chinese consumers have shown an increasing desire to shop, and they will spend on items that can boost their quality of life," said Neil Wang, president of Frost & Sullivan China.

"More retailers are launching flagship stores on multiple e-commerce platforms, and thus have expanded buying channels for consumers. The fast sales growth of e-commerce retailers is expected to continue," he said.