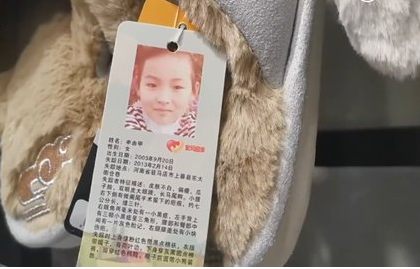 Netizens on Wednesday hailed a slipper salesman from Zhengzhou, Central China's Henan Province for posting information of missing children on slippers' tags at his own expense in the past four years.

"We sell about 2 million slippers a year. I have printed many such tags in the past four years, and I've been updating missing children's information every year," Cai Lei, the salesman, told reporters on Wednesday.

"Although there have been no successful examples of finding these children, there could still be hope if more people offer to help," he said.

Cai said after customers buy the slippers, they may cut the tag and throw it away, which is a waste.

"Thus, I'm thinking of producing bookmarks and printing the information on them."

"In 2015, I watched a movie called Lost and Love. As a father myself, I was deeply touched. Then I decided to be a volunteer," he said.

Lost and Love is a Chinese film on China's child-abduction problem.

Cai said that after becoming a volunteer, he has met many people whose children have gone missing.

"I've seen these families posting missing person posters on the street, but they did not help much. Then I wondered if printing missing children's information on our slippers' tags would help," he said.

Baobeihuijia.com said on its Weibo account on Wednesday that there have been many companies that are cooperating with the website through various ways to help spread missing children's information.

Netizens praised Cai for his kindness on social media and called on more Chinese enterprises to help families with missing children.

"The more we spread these missing children's information on Weibo, the greater the chances of finding them," netizens said.