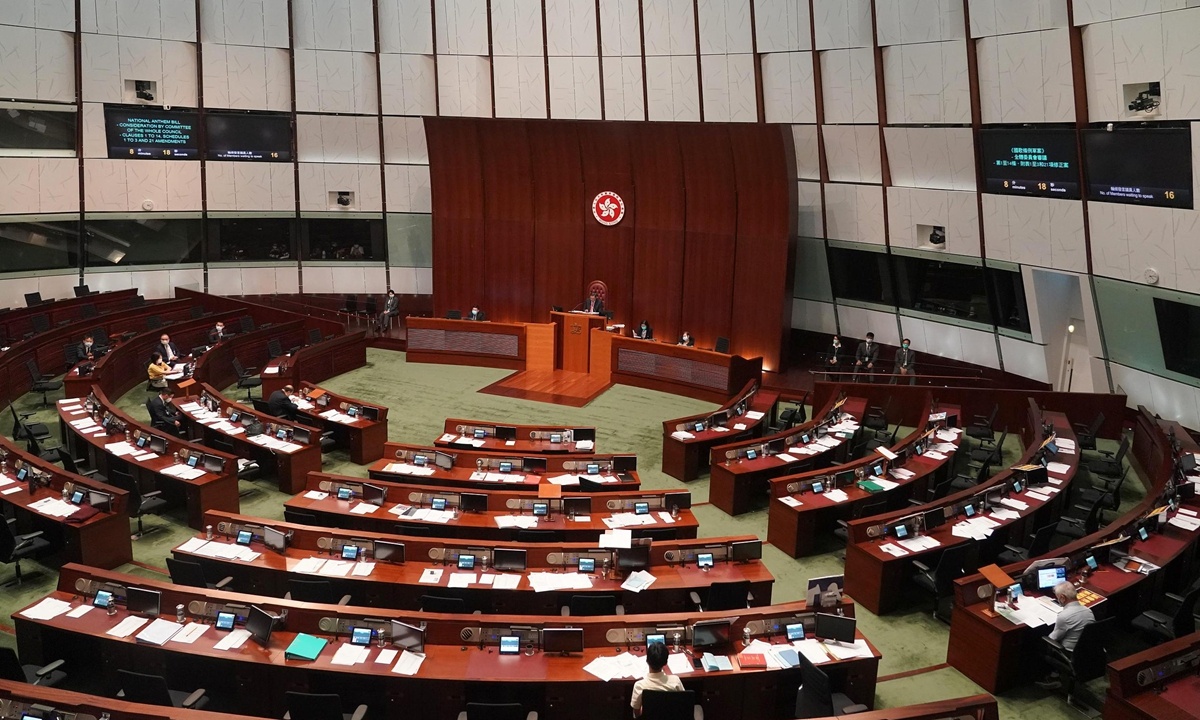 Some Western countries, especially the US, UK and Canada, appear to have reached a consensus to pressure China on the Hong Kong issue on Thursday, with the US vowing to hold accountable people responsible for "eroding Hong Kong's autonomy," and the others announcing plans to interfere in China's affairs.

Chinese analysts believe China is prepared for the West's threats, and the West's two waste cards - sanctioning Chinese officials and granting political asylum to secessionists - will not deter China but only trigger China's stronger response against the West's interference.

US Secretary of State Mike Pompeo called China's decision to disqualify Hong Kong opposition lawmakers an "onslaught" against Hong Kong's freedoms and liberties in a statement published on Thursday, saying "we will hold accountable the people responsible for these actions and policies that erode Hong Kong's autonomy and freedoms."

Liu tweeted on Thursday that the decision to disqualify Hong Kong opposition lawmakers is justified and reasonable. Nowhere in the world are holders of public office, legislators included, ever allowed to breach their oath and betray their country, he said.

Tang Fei, a member of the Chinese Association of Hong Kong and Macao Studies, told the Global Times on Friday that what the Western countries have been doing was blatant interference in China's internal affairs, and the US, which has faced domestic lawsuits over its recent elections, should mind its own affairs.

"They only have two cards - either sanction Chinese officials or grant political asylum to secessionists - like what they did before. And even if they added more sanctions, it will not deter China and Chinese officials," Tang said.

What they did would only trigger China's firm defense against Western countries' interference, Tang said.

Also on Thursday, Canada introduced a new policy to attract Hong Kong youth to study and work in Canada, amid strained China-Canada relations over the detention of Huawei CFO Meng Wanzhou.

After several Hong Kong media reported the news, some Hong Kong netizens denounced Canada for using double standards on human rights when it worked for the US to restrict the freedom of Meng.

"Good, please take all the young secessionists away. Hong Kong will be more peaceful and secure," a netizen named Victor Fok said.

The US, UK and Canada are three members of the Five Eyes. Tang said that it is nearly impossible for the Five Eyes to conduct intelligence activities or stir a "color revolution" in Hong Kong after the implementation of the national security law in the city.

"Hong Kong is no longer an undefended city," Tang said.

For some Hong Kong opposition forces who colluded with outside forces, Chinese analysts said that they will pay a heavy price.

Aside from Western governments, some Western media claimed the disqualification of opposition lawmakers made the "one country, two systems" principle "as good as dead."

In response, Tang said the "one country, two systems" principle has never been determined by Western countries that have nothing to do with it, but was determined by China's national interests and Hong Kong's prosperity and stability.

The ultimate justification of Hong Kong affairs will always be in China's hand, analysts said.