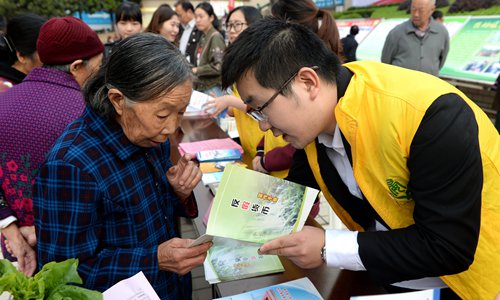 With China stepping up its efforts to fight poverty in recent years, a series of scams, using targeted poverty reduction measures as bait, has turned hundreds of thousands of people into victims. The Ministry of Public Security (MPS) is now calling the public to be vigilant against such scams."Scammers mainly take advantage of the mentality that you can make a large profit from just a small investment. Some use fake official documents and seals and pretend to be government officials to make the scams look more real," Chen Shiqu, deputy director of the criminal investigation bureau under the MPS, said at a press conference in January.In one case, four scammers from Guangxi Zhuang Autonomous Region used fake cyber identities to pose as government officials from the State Council, the Ministry of Finance, and as the director of China's poverty alleviation group to claim that the central government had launched a targeted one-on-one poverty reduction campaign through the internet. Starting last August, the group set up dozens of WeChat groups and deceived 180,000 people in four months, asking them to pay membership fees ranging from 1,000 to 2,000 yuan and claiming that they would make tenfold that sum after the organization held a meeting in Beijing that would unlock the poverty alleviation funds. Many victims, thinking the campaign was real, asked their friends and relatives to sign up to the scheme. The MPS broke the case in January and arrested 17 in Beijing and Guangxi.In another case, Henan resident Li Shujin established an organization called "Chinese Dream Set Sail Foundation," and faked documents stating that the organization had been established with the support of the State Council, Ministry of Civil Affairsand Ministry of Public Affairs. Li claimed that the public could join the foundation by paying a membership fee of 29 yuan, 99 yuan or 179 yuan. They were promised a return of 300,000 yuan, 1 million yuan and 1.7 million yuan respectively.Many of the victims were middle-aged and senior citizens from rural areas or small towns. One 56-year-old victim called Chen Pin (pseudonym) from Anhui Province told the Global Times that a friend had introduced her to a WeChat group called "Targeted poverty alleviation" in November, and the head of the group said that if she invested a small sum of money, she would see a daily return of 2.5 percent of the sum. Chen invested 2,000 yuan and got returns for two weeks before being suddenly kicked out of the group."The group leader sent us many documents with seals on it, so we thought it was real," she said. "Most people in the WeChat group are aged people who have either retired or don't have a stable job," she said.Scammers in China are known to be good at keeping up with the latest financial concepts and government policies. In recent years, scams using new concepts such as bitcoin, e-commerce and inclusive finance have ensnared hundreds of thousands of victims.A report released on January 15 by 110.360.cn, an online fraud reporting platform established by police, shows that a total of 21,703 internet frauds were reported in the past year, involving total losses of 390 million yuan ($57 million), and people who were born before the 1960s were most likely to be swindled.Chang Sha, a lawyer at Beijing-based King & Capital Law Firm, told Beijing News that some scammer groups take advantage of human greed to go after profits and package their scams as government campaigns. Middle-aged and senior citizens and people living in rural areas are especially susceptible to these scams due to a lack of access to information.