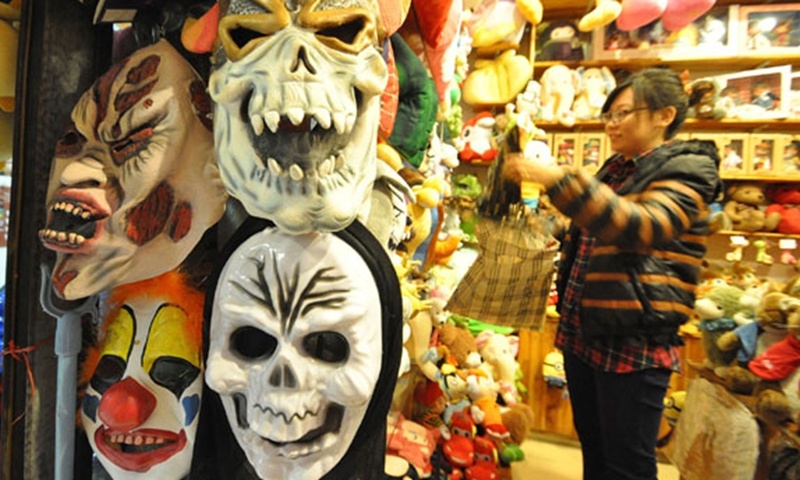 As Saturday marks Halloween, police in Guangzhou, the capital city of South China's Guangdong Province, banned scary Halloween makeups and ghost-like costumes on subways in a bid to prevent disruptions to the public security order.

"Today is the traditional Western festival of Halloween," Guangzhou police wrote on Sina Weibo, and continued "festival goers, please do not wear horrific makeup or dress up like ghosts in the subway. Violators who cause disturbance will be held accountable by the public security organs."

According to Guangzhou subway, the passengers with such dresses or makeups will be asked to take off their makeups before being allowed into subway stations. A special "makeup removal" zone is set up on the subway station of Chime-Long Paradise, which is about to hold Halloween activities on Saturday night.

A team of volunteers are also arranged to provide help to those passengers who do not know how to remove their makeups.

The warning was welcomed by Guangzhou residents and liked by many net users as a kind alert. "Be civilized despite Halloween," a Sina Weibo user wrote. Some others said local regulations must be respected even if it is a Western festival.

The police department managing public transportation issues in Guangzhou said on Halloween, businesses and entertainment venues are holding parties, and people are wearing strange costumes and makeups in the subway, attracting attention of crowds and even frightening unsuspecting passengers, which may disrupt public order in the subway.

To ensure the subway has a sound environment for passengers, Halloween goers should find other proper places to celebrate the festival. Performance art is also prohibited on Guangzhou subway. Subway working staff will give warning to the dressed-up passengers, and if they do not comply, they may be held accountable by police.