A poorly-equipped village primary school situated in Xuzhou, east China's Jiangsu province has managed to outshine most of its counterparts, seeing zero cases of myopia and obesity for eight consecutive years through rope skipping. 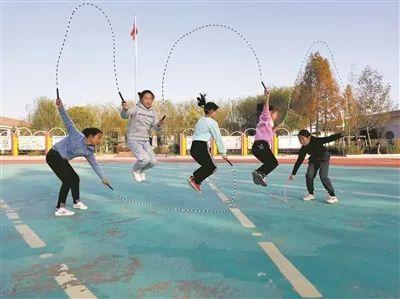 Qilu Primary School, 23 kilometers away from the county seat, is home to a total of 210 students, including 130 left-behind children, and 15 teachers, most of whom are over 50, along with a dilapidated two-story building and two rows of bungalows.

“Parents’ lack of awareness of the need for education in rural areas and the problem of grandparents looking after left-behind children have resulted in the cultivation of bad habits, including the excessive use of mobile phones and electronic products among many students," said school principal Liu En, who has engaged in rural education work since his graduation in 1988 and was dispatched to Qilu in 2001 along with his wife, Liu Yan, a sixth-grade Chinese teacher at the school.

Before the school began rope-skipping lessons, some third- or fourth-graders suffered from myopia, while others were blighted by issues including lack of motivation to study, weak social adaptability and weak sense of cooperation, said the principal while explaining their original intention in introducing the innovative lessons.

In addition to meeting the students’ practical needs, the shortage of standard sports venues, equipment and funding was also a concern for the principal, who eventually decided that fancy rope skipping was the ideal option, following an inter-school exchange activity in 2012.

To get them more interested in the fitness activity, Liu Yan, who is also the coach of the rope jumping lessons, allowed the students to tap their own athletic potential and come up with their own playing methods, which resulted in a growing number of participants. In 2015, the coach set up the first fancy rope skipping school team.

"When it comes to innovation, the students are better than me," the part-time coach said, adding that the school decided to name a new rope jumping move after the student who invented it in order to further boost interest in the activity.

So far, more than 30 kinds of basic rope jumping methods as well as more than 200 innovative moves have been adopted by the school.

"I sincerely thank the teachers for bringing us rope jumping, which provides me with not only athletic skills, but also confidence in life," said Xiao Ya, a left-behind girl at the school who attributed her positive outlook to her taking part in rope skipping.