While cooking mushrooms and leafy greens on a stovetop, Wu Kejian explained to 50 students attending a catering class how to make a nutritious meal with less oil and salt. 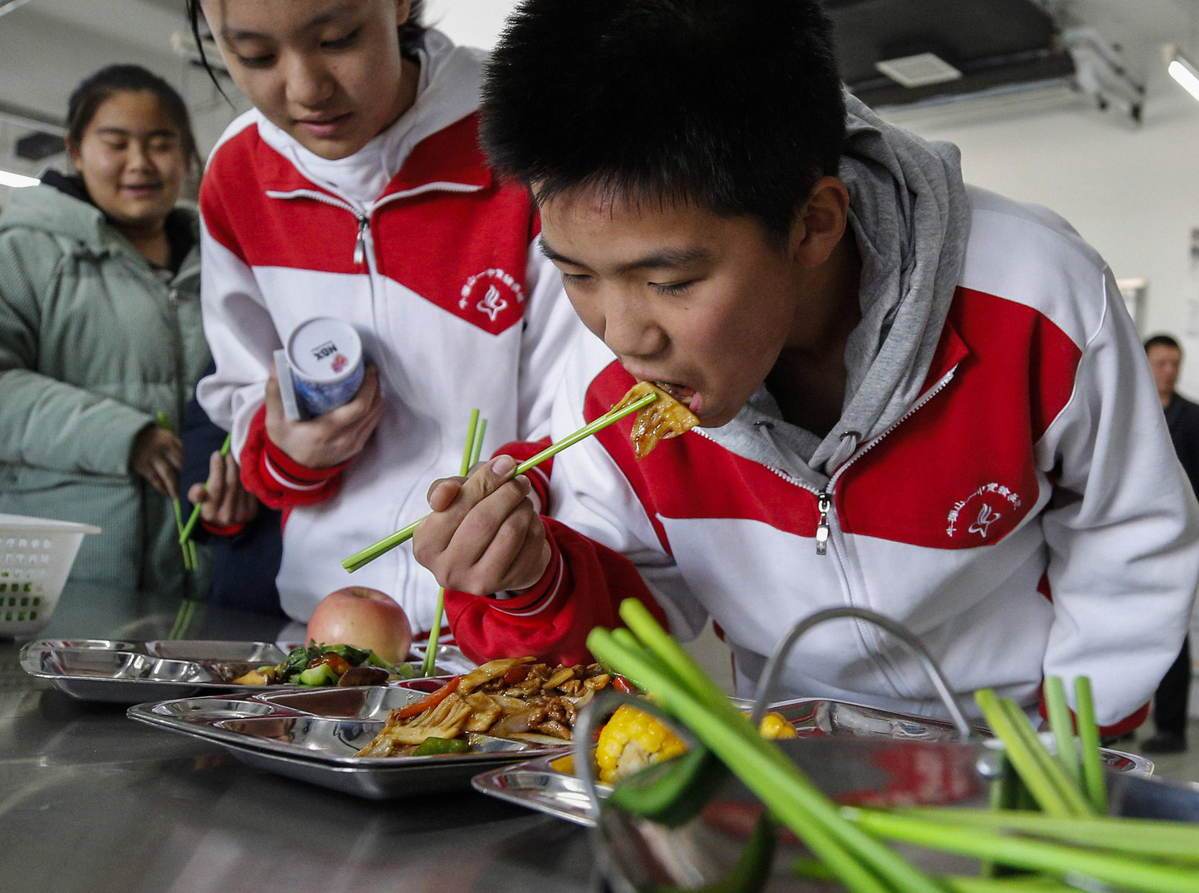 When the mushrooms were tender, he turned off the flame, served the steaming dish and invited students to taste it.

Wu is a cook at the Experimental School Affiliated to Niulanshan First Secondary School in Beijing's Shunyi district. He and four other school cooks have been trained to teach students how to make nutritious dishes at biweekly classes.

The class is part of the Nutrition School project in Shunyi.

With a focus on nutrition education, the project aims to explore new methods that can help students change their eating habits and become healthier.

Zhao Wenhua, a dietitian in charge of the project, said nutrition education focuses on the role of food, knowledge about nutrition and the cultivation of good eating habits in promoting the development and growth of children and adolescents.

The State Council issued a new guideline to implement the Healthy China initiative and promote people's health in July.

With a focus on disease prevention and health promotion, the guideline proposed 15 special campaigns to "intervene in health-influencing factors, protect full-life-cycle health and prevent and control major diseases".

An action plan for 2019-2030, devised by a State Council special committee, was made public in July, specifying the objectives, tasks and responsibilities of each campaign.

Malnutrition, undernutrition and obesity threaten the survival, growth and development of children and young people, according to the State of the World's Children 2019 report released by the United Nations Children's Fund.

According to the report, obesity levels among children and adolescents continue to rise around the globe.

Under the guidance of several national health and disease and control agencies, Shunyi launched the Nutrition School pilot project in 2016.

UNICEF supported the preliminary research work of the project, including through financial and technical support, and promoted obesity intervention.

"The project aims to promote nutrition education and physical activities to prevent children and adolescents from becoming overweight and obese," Zhao said.

As one of the pilot schools of the project, the Experimental School offers the class on nutritional food and runs a "happy farm" for its 3,400 students to experience farming.

Fan Hongyu teaches students how to recognize different vegetable seeds, explains the growth characteristics of plants and guides them on growing herbs and vegetables, including chives and cucumbers.

When the vegetables are harvested, she encourages students to take some home and cook for their parents.

Vice-principal Zhao Jinlong said the school plans to invite vegetable farmers to take students and teachers through the cultivation process step by step. He expects the students will learn about planting knowledge and better appreciate the ups and downs of being a farmer.

The prevention and control of chronic diseases should start with children and should be jointly run by the health and education authorities, according to Li Yindong, head of the Center for Disease Prevention and Control of Shunyi District.

Shao Chunyan, a health educator, said the school plans to assign sports homework during the winter vacation this month. Students will be required to complete a number of daily exercises such as sit-ups and rope skipping, "so we can ensure that students exercise regularly and maintain a healthy lifestyle at home," she said.

To make the campus more supportive of the Nutrition School project, the school has also held plays on nutrition and lectures by nutritionists, and has imparted health tips to students.

The changes are obvious. Fan Hongyu can hardly recognize some of her ninth graders when looking at their old pictures given the dramatic changes in their appearance over the past three years.

In 2017, the pilot project expanded to seven other districts and counties of seven provincial-level regions including Shandong and Sichuan.

The campaign has brought changes not only to the students but also their parents.

Lyu Yanqiu, mother of seventh grader Zhang Tengyue, said that when she heard of "nutrition education" for the very first time, she thought the program was focused on "appetite" because the two Chinese words are homophones.

After a visit to the school canteen and dining with the students, she said she understands the importance of food nutrition and safety and the need to apply the lessons at home.