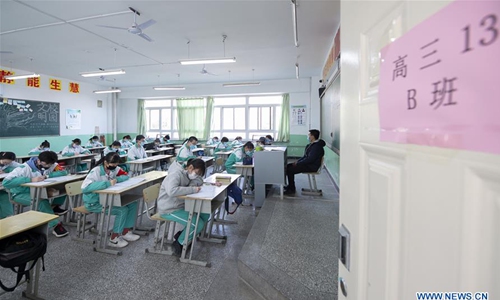 Schools in multiple Chinese cities are arranging for students to take classes on weekends to make up for lessons missed due to the two-month-long COVID-19 epidemic after Spring Festival, as education departments map out the beginning of the first semester in 2020 amid the improving epidemic situation in China.

After Qinghai Province - the first province to start schools in early March after Spring Festival - many more provinces across China will resume school in late March and April, including Shanxi, Yunnan, Sichuan and Hunan provinces.

Schools are taking a cautious approach in welcoming returning students. A video circulated online showed junior and senior students wearing masks in a high school in Yangzhou, Jiangsu Province, and lining up to get their body temperature taken before they could enter the campus on the first day of the semester on Monday.

But it's not all good news for students in Sichuan, Shaanxi, Guangdong and Shandong provinces, as their education authorities said the missed lessons during the epidemic will be made up over weekends and their summer holiday will be shortened.

An extra hour of class may be added to afternoons and athletic games and arts festivals will also be cancelled this semester, the education department in Zigong, Sichuan Province, said.

Beijing, Shanghai and East China's Shandong, Zhejiang, and South China's Guangdong provinces have yet to set a date for schools to open. Students in those regions will continue online classes.

Junior and senior students in high school will be the first batch to resume classes, with many regions setting their opening days for April 7, including East China's Jiangxi Province, South China's Hainan Province and Northeast China's Jilin Province.

Many other local education authorities are taking a more cautious altitude. In Hunan Province, students from other grades, primary schools and kindergartens will gradually start in off-peak hours after April 7. South China's Guangxi Zhuang Autonomous Region is adopting the same measure.

While students in middle and high schools will return to class on April 7, students of other grades and kindergartens in Jiangxi Province will continue with online classes.

While school students are eyeing a resumption of their classes, college students will continue to stay at home and study online, as the reopening of universities involves considerable population flows between provinces.

"There are currently more than 40 million college students in our country, of whom more than 10 million need to travel across provinces, and the other 30 million have to travel within the province. If we add primary and secondary schools, reopening every school will mean more than 300 million people moving across the country," Wang Dengfeng, an official from the Ministry of Education, said on March 13.

China's Ministry of Education has set three requirements before schools are allowed to resume - the local epidemic situation must be under control, anti-epidemic supplies must be ready at schools and public health security on campus must be guaranteed.