Science researchers in China caught between idealism and slender paychecks 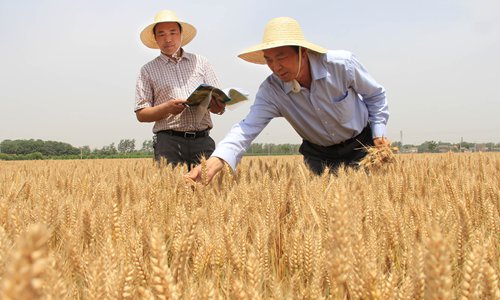 Wheat breeder Lu Ping'an (right) and a fellow researcher look at the development of wheat seeds at a wheat breeding base in Central China's Henan Province. (Photo:VCG)

A job recruitment ad in Southwest China's Guizhou Province to hire researchers with a yearly salary of 100,000 yuan ($14,500) has attracted national attention recently and become a topic of conversation for Ying Ying (pseudonym) and her colleagues.Working as researchers in a power machinery research institute in Northeast China's Liaoning Province, Ying and her colleagues have no interest in getting a job in Guizhou. Rather, they are complaining about the salary offered in it. "Paying a 100,000 yuan yearly salary for a needed researcher seems too low," Ying said. She noted that the recruitment offer in Guizhou reflects the current unsatisfactory wages and treatment of researchers in China.China's Five-hundred-meter Aperture Spherical Radio Telescope (FAST) program, located in Guizhou, recently listed the job ad requiring applicants to relocate for the long term, have strong English proficiency and be able work the night shift.One position listed in the ad asks researchers to develop software on dealing with and monitoring spectral line data, monitoring and debugging the operation of FAST and doing scientific research with FAST and other telescopes.The job ad has triggered heated discussions with many netizens questioning how the "low" salary does not match the high requirements.   "Although the salary offered by the program is higher than the average in Guizhou — 79,826 yuan in 2017 — it still has no advantages considering that the working site is in a remote area and researchers need to live separately from their family for a long time," according to a commentary from Qianjiang Evening News. "Some netizens said that researchers should not care too much about money and should have dreams. Yes, we are working to realize some dreams for the country but we also have parents to look after and children to feed," Ying said.

Decent life 10 years ago Discussions around the FAST ad also caught the attention of Xiao Fu (pseudonym). Xiao, 30, is working in an aerospace institute in Wuhan, Central China's Hubei Province. He told the Global Times that his yearly salary is about 110,000 to 120,000 yuan after paying tax. The money is sent to him in three ways: about 5,000 yuan every month, a quarterly bonus and a year-end bonus. "The salary of the institute has changed little in the past decades. It may have offered researchers a decent life 10 years ago but not now. The salary increase cannot catch up with soaring real estate prices and we are under financial pressure," Xiao said.The average salary in Wuhan was 6,800 yuan in 2017 and the average house price in Wuhan in July 2017 was 17,000 per square meter, according to Wuhan-based cnhubei.com. The China Association for Science and Technology recently released a report on the life of people working in the science and technological fields in China. The report finds that the average salary was 91,000 yuan in 2016. Some 33.5 percent of them are living month-to-month.Although the average salary of these groups of people has increased by 22.7 percent compared with 2012, their satisfaction with their salary has decreased. And the main reason may be their salary has not kept pace with people working in other fields, according to the report.The conflict between idealistically working in the science and technological fields while leading a relatively financially stressful life seems to have been a topic for years. Wang Lin, a researcher who graduated with a doctoral degree and worked in an institution in Beijing, wrote online that he earned 7,000 yuan a month but paid more than 4,000 yuan for rent.Many of his classmates from high school earn more than him. "I don't know why I studied hard for more than 10 years," Wang wrote.Some netizens commented following Wang's post that he should not complain because many great researchers are contributing silently and if he really likes what he does, he should bear the problems with his life.Some responded that not all scientific work can get quick benefits, and the dissatisfactory salary of researchers would finally affect the development of the country's science and technology work.

Another choiceResearchers who get promotions after working for three to five years to administration positions may have their salary doubled, but only few of them get the chance, according to Xiao.Ying said that they also need to pass different exams to get higher professional ranks and have papers published in academic journals to get promotions.Instead of waiting for years for their promotion chances, many of Ying's colleagues choose to leave.Li Hua (pseudonym), used to work in the same institute as Ying but quit her job last year. She moved to Shanghai with her family and works in a commercial power machinery company.She said that although the working environment in her new company is not as comfortable as her previous job and she has more work to do, she earns more and her family is living a better life.However, many researchers who used to work in key departments and want to change their jobs need to act in accordance with regulations and laws on confidentiality."Staff working on confidential projects need to stay for one to two years in the institute or they cannot work in the same field for other companies during this period. For those who have been working in a core department, the period would be three to five years," Ying said.The Xi'an Aerospace Propulsion Institute applied for arbitration at a local labor dispute arbitration agency on May 20 in order to retain Zhang Xiaoping, a rocket engine designer, who moved to a private company earlier this year, because Zhang has worked with proprietary information, the Beijing Youth Daily reported in October."What happened to Zhang is by the book. Researchers need to obey the regulations and laws on confidentiality. However, this does not  stop those who want to find new jobs, especially since the commercial aerospace industry is booming and is offering more attractive salaries," Xiao said, noting that resignation rate has increased since 2017 in his institute."Researchers are usually responsible for tedious foundational experiments and business trips, which leave us less time for family… we also need to work overtime to speed up the process of some programs," Xiao said."We choose the job out of some ideals — to make some contributions for the country like the people who came before us. The rapid development of China's aerospace industry is based on work, time and even the health of thousands of common researchers like us," Xiao said, noting that they also need a comparable salary.Calling for changesSome science and technological institutions and research centers in universities have brought in various programs for researchers, which can boost their income."However, it is hard for young researchers to successfully apply for these programs. And some institutions pay too much attention to quick success and instant payoffs, which would make them neglect the work of common researchers," Xiong Bingqi, deputy director of the 21st Century Education Research Institute, told the Global Times. An anonymous expert said that compared with the limited increases received by most researchers, many institutions have offered better salaries and treatment for overseas talent and the contrast may bring tension when cooperating."Some institutions have rigid rules on the use of expenditures. And they spend more on updating equipment than increasing researchers' salary," Mei Xinyu, a research fellow with the Chinese Academy of International Trade and Economic Cooperation, told the Global Times."Research funding should also be an investment in risk, and it should also take researchers' efforts into consideration," Mei said. "Researchers are the main force for innovation and the development of science and technology… the most important national programs, including Tiangong and FAST… are not only the work of the top scientists, but also thousands of researchers," read a commentary in the Changjiang Daily."Giving researchers a decent life, a salary which would reflect the value of their work, is a problem that must be solved," read the commentary.China has put forward different policies on boosting the income of researchers in recent years. According to an announcement by the State Council in July, the government vowed to give more freedom to researchers on the use of research funds."The salary incentive system would give more awards to researchers who are responsible for solving the crucial problems in a mission. The performance pay would be enhanced for a team leader… a new evaluation which pays attention to results and performance would be established," read the release. Increases in researchers' salaries are on the way. Xiao and Ying said that they look forward for some better changes in their life. "I really like what I do and want to make some achievements in my field," Xiao said.