LHASA, Sept. 10 (Xinhua) -- The Qinghai-Tibet Plateau, now dotted with glaciers and lakes, was a lot different from what it was like tens of millions of years ago and its landscape may continue to change, according to the findings of Chinese scientists. 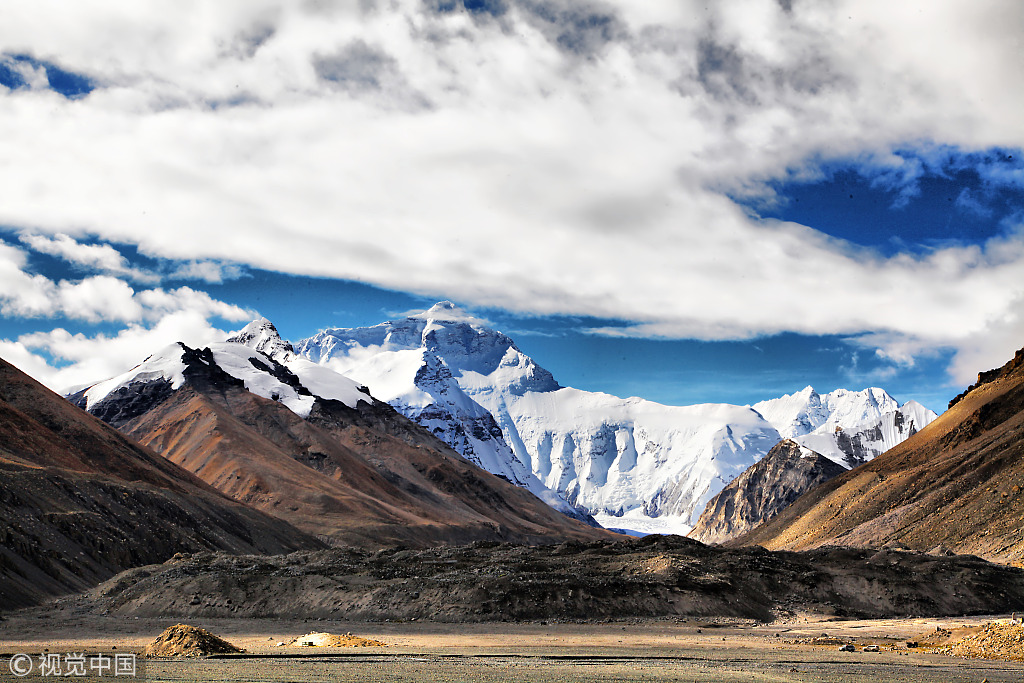 At the ongoing Fourth China Tibet Tourism and Culture Expo, Yao Tandong, chief scientist on China's second comprehensive scientific expedition to the Qinghai-Tibet Plateau, shared some of the initial discoveries of the expedition.

Known as Asia's water tower, the Qinghai-Tibet Plateau is the source of a dozen major rivers of Asia, said Yao, stressing finding the secrets of its evolution and ecosystem was essential to the well-being of Asians.

The expedition set off in June 2017 and was the second of its kind in 40 years. Lasting five to 10 years, the expedition will conduct a series of studies focusing on the Plateau's glaciers, biodiversity, and ecological changes, and will also monitor changes in the region's climate.

In a study concerning the impact of the rise of the Himalayas and Gangdise Mountains over the environment, researchers Ding Lin and Deng Tao from the Chinese Academy of Sciences (CAS) unveiled the mysterious past of the Qinghai-Tibet plateau.

Their first finding was discovering the existence of tropical forests in the region. In southern Tibet, researchers have found fossils of tropical plants such as palms and banyans dating back 19 million to 56 million years.

This indicates that some 56 million years ago, the Himalaya region was a subtropical low land with an altitude of 1,000 meters above sea level.

These plant fossils show a large area of tropical and sub-tropical forest existed in the Himalaya region.

Comparing these fossil plants with similar ones in Europe and North America, the scientists discovered that the Qinghai-Tibet region used to be an important terminal for the diffusion of plant species in the early Cenozoic Era, with some plant species heading west to Europe and others going east to North America.

Although the distribution of warm weather plants have narrowed in the Plateau, the scientists say their descendants can be easily found nowadays in tropical and subtropic lands.

The researchers say that about 19 million years ago, the land rose to the height of 2,300 meters above sea level and then rose to more than 5,500 meters 4 million years later.

As the rising Himalayas blocked the South Asian monsoon air mass from heading north some 24 million years ago, the Qinghai-Tibet region gradually dried out.

The Himalayas have diverted most of the rainwater to southern China which used to be a desert. Nourished by rain carried by the monsoon, southern China slowly changed into a humid monsoon climate with fertile soil.

Without the rise of the Himalayas, the scientists say southern China would have remained a desert.

When the Qinghai-Tibet region changed from a tropical plain to a plateau, it began to witness a flurry of biological evolution. Tropical ornamental fish such as fighting fish and paradise fish, catfish and carp swam to the south along newly formed waterways, while those who remained died out.

About 5 million years ago, the land was high enough to have a cold alpine environment and the woolly rhinoceros, palaeoloxodon, arctic fox, argali, Tibetan antelope and ancestors of many modern mammals appeared.

Some of them left the Plateau during the Quaternary glacial period about 2 million years ago for the north, such as the arctic fox who still lives in the Arctic Circle. Others stayed and became typical plateau animals.

The snow leopard also appeared during this period and later spread across the world.

Small rodents, essential to grassland ecosystem, were found alien to the Plateau. Fossil evidence found in Ali shows hamsters and zokors moved in around 4 million years ago from the Mongolian Plateau and northern China through Hoh Xil and Chang Tang to the interior of the Plateau.

Over millions of years, the evolution of the region's ecosystem has never stopped. The expedition team found glaciers on the Plateau and its neighboring regions have shrunk by 15 percent in the past half century, while permafrost has shrunk by 16 percent.

Yao said the melting glaciers, as a result of rising temperatures, have expanded lakes and increased water flows in rivers originating from the region.

The number of lakes larger than one square kilometer has increased to 1,236 from 1,081. Meanwhile, the alpine treeline has risen by 29 meters on average over the past century, a sign of improving vegetation on the Plateau.

For tens of millions of years, the Plateau had been colder and drier. Now it's getting warmer and greener, said Yao.

As the Plateau's eco-system is so fragile and the global warming trend continues, it's necessary for scientists to know more about the Plateau and make proper suggestions on ecological protection, said Yao.