CHINA Scientist expects 50% of wheat farmers to use hybrid variety

Scientist expects 50% of wheat farmers to use hybrid variety

China is promoting domestically-developed hybrid wheat for commercial purposes, a field which China is way ahead in the world, experts said. 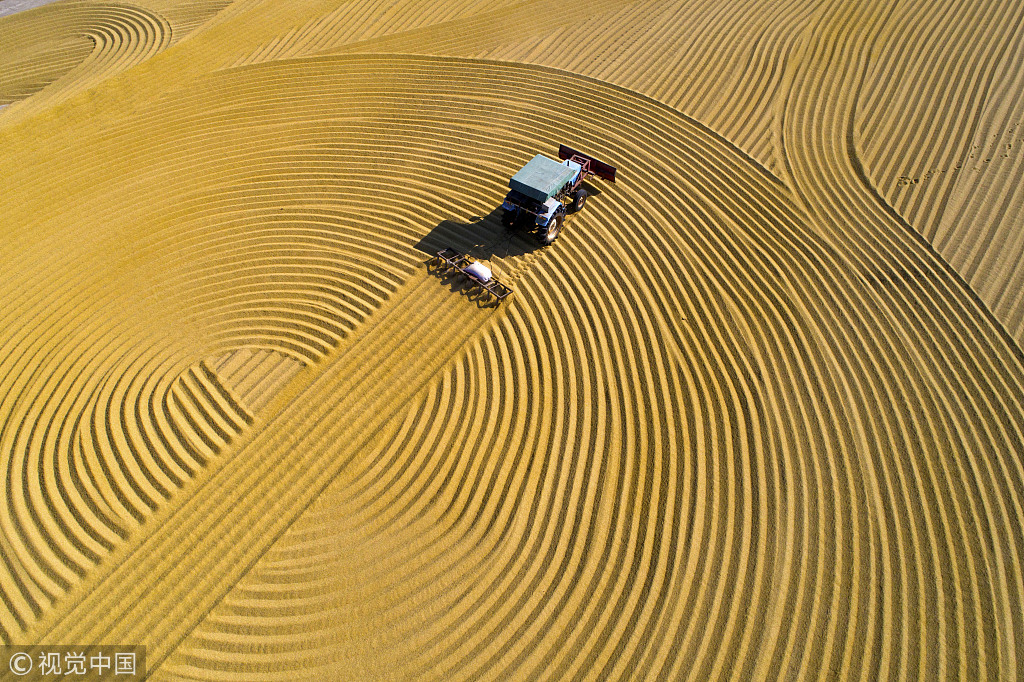 Photos: VCG
China developed the two-line hybrid wheat system recently. One of the system's products, Jingmai series hybrid wheat, began large-scale promotion around the country last year, reported the Beijing-based Science and Technology Daily on Tuesday.
The two-line hybrid technique is often used in hybrid rice and wheat. It can increase wheat production by 20 percent.
It was developed by the Beijing Academy of Agricultural and Forestry Sciences' Engineering and Technique Research Center for Hybrid Wheat.
"Our goal is to have half of Chinese wheat farmers use hybrid wheat," Zhao Changping, the institute's director, told the Global Times on Tuesday.
By 2020, 67,000 hectares of agricultural land is expected to raise hybrid wheat, according to Chen Zhaobo, general manager of the China National Seed Group's Hybrid Wheat Seed Industry (Beijing) Co Ltd, the newspaper reported.
In terms of the technology, "China is leading the world by a large margin," Zhao said.
The hybrid wheat technology has been a challenge for the past 60 years. Scientists faced problems such as production and breeding inconsistencies. But China's two-line hybrid wheat system has solved that problem.

"It is adaptive and stable, meaning it is resistant to diseases, stress, drought, pests, saline and alkali," Zhao said, adding that farmers can also save 30 to 50 percent of water, use 30 percent less seeds, and use the seeds longer before they begin to deteriorate.
"The demand for hybrid wheat exceeds the supply. I have sold 25,000 kilograms of Jingmai 9 seeds in the past year. It will not be a problem to sell 200,000 to 250,000 kilograms this year based on its performance. I am worried that we may not have enough seeds," Wang Xinchao, a Langfang-based agricultural sales manager, was quoted by the Science and Technology Daily as saying.
To meet the demand, the Beijing Academy of Agricultural and Forestry Sciences is cooperating with the government of Dengzhou, Central China's Henan Province to establish an industrialization base for the hybrid wheat project. It's aiming to produce 15 million kilograms of hybrid wheat seeds for 134,000 hectares, the Science and Technology Daily reported.
The base is operating and successfully harvested a batch of hybrid wheat on May 29, according to a statement released by Henan Province's Development and Investment Administration Center of Land and Resources.
The hybrid wheat has been exported to several countries and performing well, Zhao said.
China's hybrid wheat has been harvested on a large scale in Pakistan since 2009, with an average yield of 30 percent more than the yield of local wheat, marking the first step in hybrid wheat internationalization, the Science and Technology Daily reported in 2013.