Geosystems scientists and environmental researchers from home and abroad shared their views under the theme of “Innovation, Co-governance and Collaboration in Climate Change Research” during an online event held ahead of the Pujiang Innovation Forum.

At least 150 years of steady global warming is driving changes in extreme weather and air pollution; and the culprit is human activity which is putting carbon into the atmosphere.

“During the COVID-19 pandemic, global carbon emissions were reduced by 11 trillion tons, while the number soon soared after business resumed,” said Guan Dabo from the University of Cambridge.

Worse still, the North Pole has been warming more than twice the global average, causing extensive melting of ice sheets, said He Jianfeng, a senior researcher at the Polar Research Institute of China. 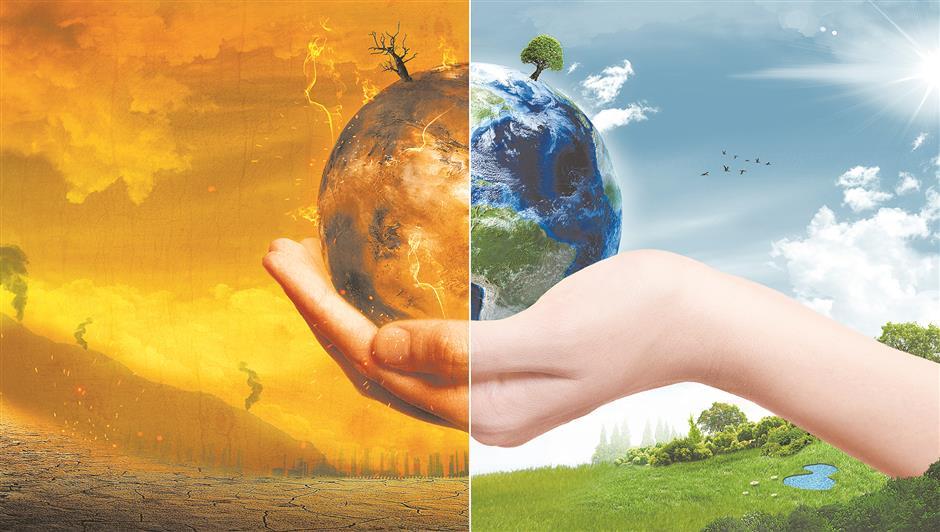 “Every 10 years, the Arctic Ocean is losing 6.3 percent of its ice area,” He said. “Previously, Arctic Ocean ice was 3 to 5 meters thick. But in 2010, its thickness was less than 2 meters. Research data shows that in the middle of this century, the Arctic will have no ice in summer.”

According to Professor Myles Allen from the Oxford University, there are two possible ways to fight global warming: either a global ban on fossil fuels or innovative strategies to process carbon dioxide from fossil fuel emissions.

It’s impossible and unreasonable to implement the first method. Therefore, the second method becomes an option.

Allen said carbon dioxide is driving up global temperatures by 0.2 degrees Celsius per decade. Norway offers a good example for the adoption of a safe and permanent disposal of carbon dioxide.

There, scientists capture carbon dioxide in chemical plants, add pressure to turn the gas into liquid and inject it into rocks deep underground. Carbon dioxide can thus be safely stored away from humans.

According to Professor Denise Mauzerall from the Princeton University, it’s better to replace heat energy, usually generated from coal burning, with new energy in power plants. Meanwhile, this will bring cleaner air, which can also help improve efficiency of solar energy.

Guan suggested that everyone can help in curbing global warming by living a sustainable lifestyle.

He blamed the fashion industry for causing huge carbon emissions. People are buying more clothes, and meanwhile they are throwing away old clothes faster than ever.

The fashion industry has a responsibility to educate people to lead a sustainable lifestyle. Meanwhile, customers should think about their carbon footprints when making purchases, he said.

According to him, consumers are paying a price for their waste. Based on his study, climate change has increased the price of a bottle of beer in the US to US$6.48 from US$3.36.

“I think governments should take measures to make people be aware that climate change is not just a matter of temperature. It can impact every aspect of our lives and we may say goodbye to the happy times that we’ve enjoyed,” he said.