CHINA Scientists unearth meteorite from the birth of the solar system

Scientists unearth meteorite from the birth of the solar system 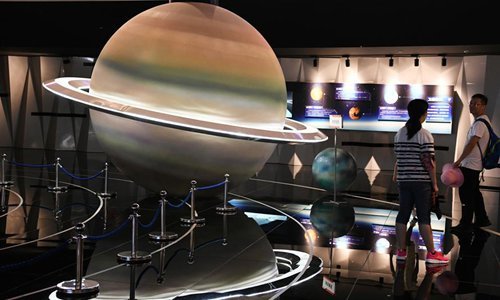 Scientists believe they have identified a meteorite formed in the first million years of our solar system, making it the oldest known meteor of volcanic origin.

The space rock, which began its journey some 4.5 billion years ago, has already proved an "exceptional" witness to the building blocks of the planets.

Known as Erg Chech 002, the meteorite was discovered in May 2020 by meteor hunters in the Algerian Sahara desert. It had rested undisturbed for "at least 100 years", according to Jean-Alix Barrat, a geochemist at France's Brest University.

In a recent study published in the Proceedings of National Academy of Sciences journal, Barrat and his colleagues describe its discovery and several rare features.

There are 43 officially documented fragments, but "probably about a hundred" either still in the ground or unaccounted for, said the study. The largest ones are "as big as a fist," Barrat told AFP.

With its greenish exterior and brownish interior, Erg Chech 002 might not appear extraordinary at first glance. But it is, in fact, extremely rare.

Of the roughly 65,000 meteorites so far documented on Earth, only around 4,000 contain what is known as "differentiated matter". This means they came from celestial bodies large enough to have experienced tectonic activity.

Of those 4,000, 95 percent come from just two asteroids. But Erg Chech 002 is among the remaining five percent.

"Such rocks were quite common at the very beginning of the history of the solar system."

There are two possible explanations for Erg Chech 002's rarity.

The type of protoplanet from which it originated provided raw material "for the growth of terrestrial planets" such as Earth, said Barrat.

Others were pulverised in the great cosmic billiard game of the formation of the solar system.

The surface of the Moon, pockmarked with innumerable asteroid impacts, is a relatively recent witness to this second type of protoplanet.

"No asteroid shares the spectral features of EC 002, indicating that almost all of these bodies have disappeared, either because they went on to form the building blocks of larger bodies or planets or were simply destroyed," the study said.

The so-called "parent body" of Erg Chech 002 could have measured around 100 kilometres across.

It was formed in the first million years of the solar system, according to the study's co-authors, March Chaussidon, from the Paris Globe Institute of Physics and Johan Villeneuve.