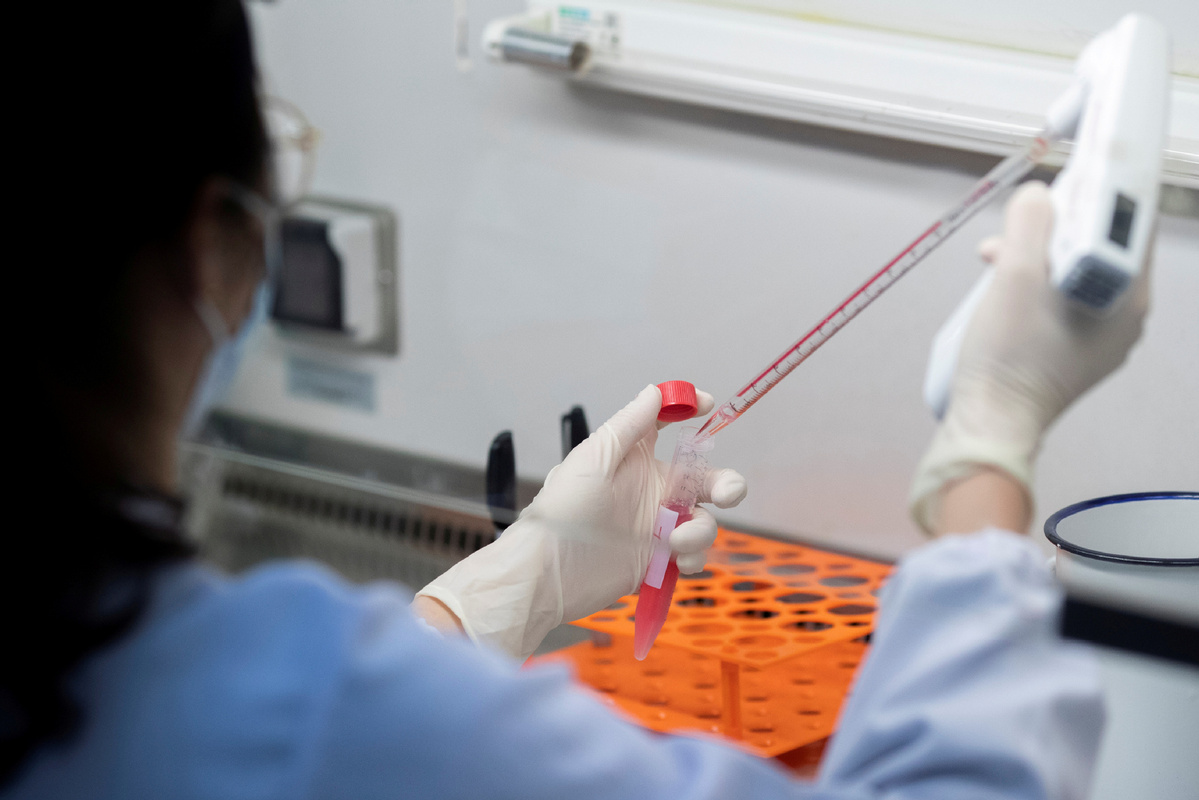 A scientist works in the lab o at Tsinghua University's Research Center for Public Health in Beijing, China, March 30, 2020. [Photo/Agencies]

Scientists are now aware that the novel coronavirus is changing its genetic makeup slightly, but the rate of mutation is slow and no evidence of a change in the virus's biology has been found, meaning these minor mutations will not affect current drug and vaccine development, scientists have said.

However, viruses mutate naturally as part of their life cycle, and scientists should pay more attention to mutations that can lead to drug resistance in the long run, Lan Ke, director of the State Key Laboratory of Virology in Wuhan, told China Science Daily, a newspaper run by the Chinese Academy of Sciences.

"Generally speaking, a random mutation has to occur on a relatively less vital part of the viral genome in order to be passed down," he said. "If a mutation occurs on key parts of the genome, such as those related to replicability, the survivability in future copies will likely decrease."

The coronavirus tends to mutate slower compared to other ribonucleic acid viruses, so it will need more time for these small, cumulative changes to alter its function, he said.

At the same time, current drug and vaccine research against the virus focuses on its key genomes and antigens, which have been stable. "So at this moment, the risk of viral mutation undermining vaccine and drug development is low."

Lan's remarks came amid a recent study by scientists from Australia and Taiwan of China claiming a coronavirus strain isolated in India carried a mutation that could hinder global vaccine research.

The non-peer reviewed study said the change had occurred in part of the spike protein, a vital part of the virus's exterior that allows it to bind with and enter human cells.

The authors claimed the study has shown that mutation can indeed happen on key parts of the virus, and warned that "current vaccine development against Sars-Cov-2 is at great risk of becoming futile."

However, other experts have pointed out that the startling mutation may be due to technical error during the sequencing process. The results were also produced via computer simulation, which also raised many eyebrows, and lab experiments are needed to verify the claims.

Last month, Zhou Qi, deputy secretary-general of the Chinese Academy of Sciences, said the virus's mutations require further research, and China is conducting a coordinated research effort to evaluate the virus and develop a vaccine.

"All research is under control," he said. "The mutations that we now know have not affected our drug, antibody or vaccine development. We will keep monitoring the mutations the virus generates and plan related research projects accordingly."

Zheng Zhongwei, director of the Development Center for Medical Science and Technology of the National Health Commission, said China has nine ongoing research projects on vaccine development, and some will hopefully enter clinical trials in April.