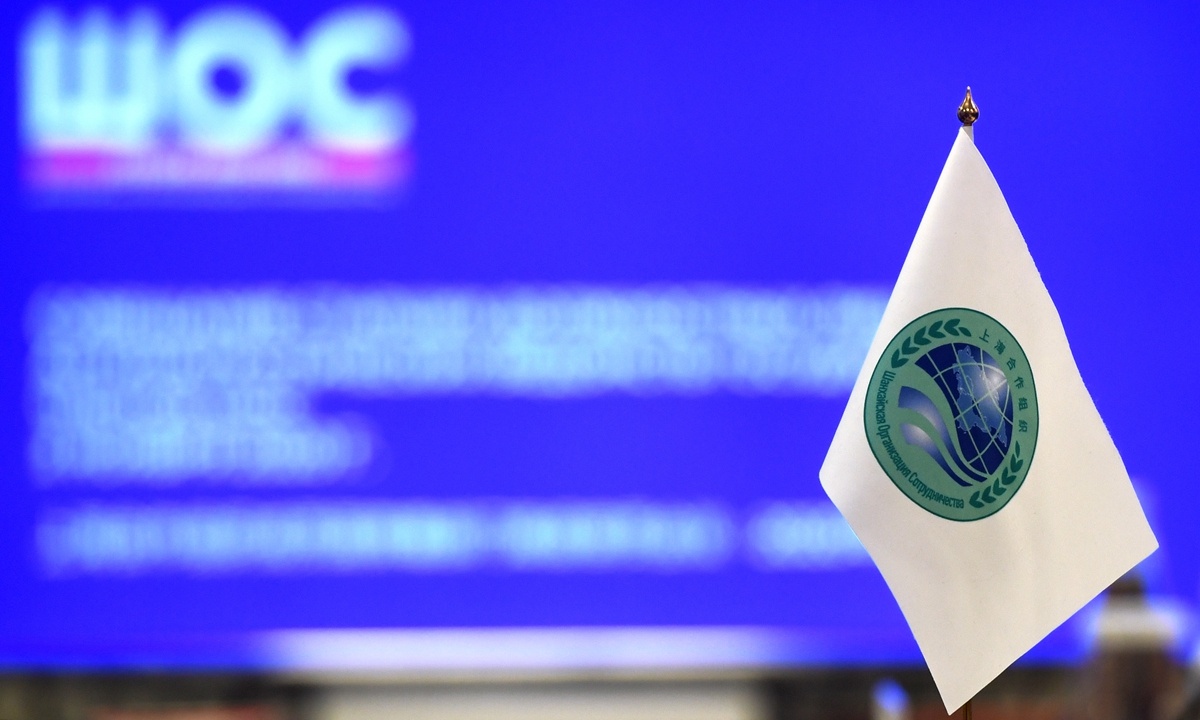 A flag with the Shanghai Cooperation Organisation's logo. (Photo: AFP)

Against the backdrop of the transformation of the world's economic layout, triggered by the rise of Asia as new development hub, the SCO has provided a reliable platform helping the region to become one of the world's economic development centers, SCO Secretary General, Vladimir Norov, said at a parallel session of the Shanghai Cooperation Organization Forum on People-to-people Friendship held in Wuhan, Central China's Hubei Province on Wednesday.

Yet, he urged the organization to actively discuss ways to offset the blow exerted by COVID-19, as trade volume of members of the bloc has plummeted 15 percent during the pandemic.

The Secretary General said that the initial preparation has kicked off. The preliminary work has focused on creating an optimized financial market and simplifying tax and customs clearance procedures, among other areas..

Meanwhile, it is important to eliminate trade barriers between bloc members and build a unified payment system to ensure members have equal rights to enter each other's markets, said Norov.

During the conference, Andrey Denisov, Russian ambassador to China, said that relevant department of SCO countries are also discussing the possibility of building a diversified transportation corridor between member countries, the improvement of transportation infrastructure and the simplification of visa procedures to improve SCO countries' connectivity.

Norov said that countries have witnessed difficulties in transporting goods during the pandemic. For instance, there were not enough containers for companies to transport cargo. Thus, the Secretary General proposed the development of a railway system to better connect SCO countries, as well as building logistic centers in places such as Northwest China's Xinjiang Uygur Autonomous Region, to better connect central Asian countries.

He also emphasized that Hubei has its role to play in improving connectivity between SCO countries.

As a key point in the Belt and Road Initiative, Hubei is trying to further open up and looking forward to contribute more to the SCO development, said Li Lecheng, Executive Vice Governor of Hubei Province, at the conference.

He especially mentioned that China, Russia and India, are three big film makers and consumers within the bloc, and the film industry has a huge market within SCO countries.

Covering three fifths of the Eurasian continent, the eight permanent member states of the SCO are home to nearly half of the world's population and contribute about 20 percent of the world's GDP.