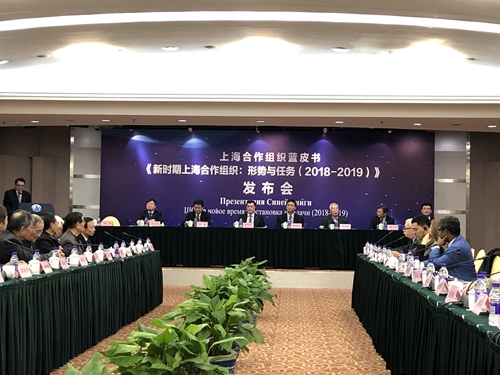 A launch ceremony for the book Shanghai Cooperation Organization in the New Era: Situation and Task (2018-2019) is held in Beijing on Monday. SCO Secretary General Vladimir Norov and Qi Zhenhong, director of the China Center for SCO Studies, also the book's chief editor, attend the ceremony. (Photo: Global Times)

The Shanghai Cooperation Organization (SCO) should expand cooperation in security and counter-terrorism and strengthen cooperation in politics to consolidate the foundation for cooperation amid the changing international environment, said officials and experts on Monday.

The remarks were made at a blue book launch ceremony on Monday held by the China Center for SCO Studies and the China Institute of International Studies in Beijing.

The blue book Shanghai Cooperation Organization in the New Era: Situation and Task (2018-2019), the second of its kind, is a collection of works by scholars from think tanks in the eight SCO member states as well as those from observer countries and dialogue partners.

The book analyzes the situation and tasks the group faces, especially after it expanded membership for the first time by incorporating Pakistan and India in 2017 and after the Qingdao summit in 2018.

Qi Zhenhong, director of the China Center for SCO Studies and also editor-in-chief of the book, noted at the launch ceremony that the membership expansion has been a landmark event in the development of the SCO.

"The SCO has been pushing forward cooperation in six areas, namely politics, security, economy, people-to-people exchanges, mechanism building and external communications, which has made remarkable progress and has a growing impact on regional and global affairs," said Qi.

The Convention of Countering Extremism, passed in 2017, has been put into practice since this year, which is a forceful legal weapon to tackle the three evil forces, namely terrorism, separatism and extremism, according to Qi.

SCO Secretary General Vladimir Norov said at the ceremony that the SCO should expand security and counter-terrorism cooperation.

Norov urged the SCO to continue cooperation on three major fronts - security, economy and people-to-people exchanges - which are aligned with the needs of the international community in combating the three evil forces, as well as human and drug trafficking, in which the SCO has a firm role to play.

He also noted that the SCO made its voice heard in terms of cybersecurity and the peaceful use of cyberspace.

Li Hui, special representative of the Chinese government on Eurasian Affairs, said at the event that the SCO needs to enhance its capacities to forestall immediate threats by improving cooperative mechanism in fights against the three evil forces.

The Chinese government is always committed to the SCO and regards it as a foreign policy priority, Li said, noting that China needs the SCO in its development and the SCO also needs China.

This year, the SCO also released a new version of guidelines for economic and trade cooperation, offering a blueprint for the next 15 years.

Sun Zhuangzhi, director of the Institute of Russian, Eastern European & Central Asian Studies of the Chinese Academy of Social Sciences in Beijing, believes that economic integration among SCO participating countries is hard to achieve at the current stage as the security and economic interests of the countries differ a lot, added with the complex external geopolitical environment and major power competition.

"Therefore all the countries should strengthen cooperation in politics to consolidate the foundation for cooperation," Sun said.