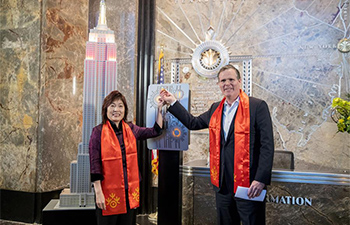 British Secretary of State for Scotland David Mundell said he expected the Great Festival of Innovation to be held in March in China's Hong Kong Special Administrative Region will bring along more collaborations between Scotland and China in innovation and technology.

Mundell said in a recent interview with Xinhua that the festival is about bringing together leading thinkers with innovative new ideas about new technology, artificial intelligence, robotics, both in business and in government. Hong Kong is an ideal place for the event to take place as "it is associated with innovation with forward thinking and a place that brings people together," he said. "So we see it as a real catalyst for our speakers." Hong Kong is an important gateway to the Chinese mainland and an important hub in Southeast Asia, Mundell said, and Scotland wanted very much to work with the Chinese mainland and Hong Kong in collaborative projects; fintech is one of the areas, for instance. "From what I saw while I have been here, there's a lot of expertise (in fintech), a lot of ideas here in Hong Kong," which, he said, would boost collaborations between some of the well-known financial services companies in Scotland and people who are running fintech business in Hong Kong. The Great Festival of Innovation, held by Britain's Department for International Trade, will be held in Hong Kong on March 21-24, where there will be about 2,000 delegates, according to Mundell. The festival will offer a series of seminars, forums and workshops, in which attendees can discuss the latest trend of new technology, as well as the new fashion of people's work and life in future. Mundell said the festival is a comprehensive event, where a lot of well-known speakers will share their ideas and thoughts about new technology, robots, and artificial intelligence. Some of the topics include the future shape and nature of transport and vehicles; how robots are going to change the way people work; and "agritech," a fast developing area that combines technology and agriculture. "Part of the conference very much about networking," he said. "It's also about people who have already taken the idea a stage further and meeting people who can help them to make that into a business." Talking about other areas, he said there has already been a significant cooperation and collaboration ongoing between Scotland and China, such as an international diabetes center supported by the University of Edinburgh set up in China's southern city of Shenzhen. That is a good example of how Scotland took its expertise and put it directly into practice, he added.