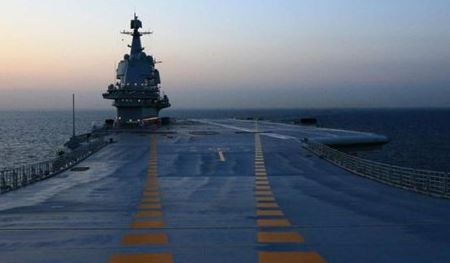 Although the second carrier known as the Type 001A is similar to the Liaoning, it has an optimized flight deck, reduced weapon areas and a smaller superstructure with added deck areas, Li Jie, a Beijing naval expert, told the Global Times on Tuesday.

Li noted that it also has an enlarged hangar, but reduced space for missile storage compared to the Liaoning.

The 24 J-15s of the Liaoning could be a limiting factor as regional combat might require about 40 aircraft to seize air supremacy, Li said. The 36 jets on the Type 001A would expand its combat capability, he said.

In addition to the 36 J-15 fighter jets, the Type 001A can carry other types of aircraft including helicopters, Chinese analysts said.

Hu Wenming, chairman of China Shipbuilding Industry Corporation and head of China's aircraft carrier program, said "China now has a mature development and construction team, and the average age of team members is only 36," CCTV reported.

"Whatever type of aircraft carrier our country wants to develop in the future, we can make it on our own," Hu said.

The team can build any other type of warship given its expertise, Hu noted.

It took 26 months to build and launch the Type 001A, which is China's first domestically developed aircraft carrier, CCTV reported, or almost half the time of a foreign aircraft carrier of similar type to finish construction.

It is reportedly conducting its seventh, after setting sail on August 1. There were no signs the ship had returned to its dock as of press time.

Li said the latest, lengthy sea trial could be in preparation for its final delivery to the Chinese navy.