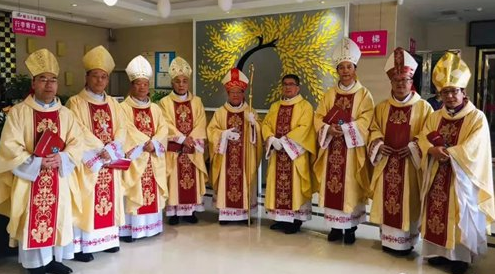 Xu Hongwei (fourth from right), takes a group photo with other Chinese bishops before he was ordained as bishop of Hanzhong diocese in Northwest China's Shaanxi Province on Wednesday. (Photo: Global Times)

China on Wednesday ordained its second bishop this week after the country signed a provisional agreement with the Vatican last year.

Xu Hongwei was ordained as bishop of Hanzhong diocese in Northwest China's Shaanxi Province. The consecration was hosted by Bishop Ma Yinglin.

More than 80 priests and over 500 Catholics attended the ceremony held on Wednesday.

The bishop consecration of Xu with a Pontifical mandate is a sign that the provisional agreement is bearing fruit in the name of communion and harmony, said Antonio Spadaro, an Italian Jesuit priest and editor-in-chief of La Civiltà Cattolica, a Rome-based periodical funded in 1850.

An important sign of this communion is that the ceremony took place in a solemn and participatory atmosphere, with the presence of all the bishops of the province of Shaanxi, Spadaro said.

The ordination came two days after the consecration of Bishop Yao Shun on Monday, the first Chinese bishop ordained after the landmark deal.

Yao received the Papal Mandate and the ordination of Yao is the first to take place in the framework of the provisional agreement between the Holy See and China, the Vatican Press Office told the Global Times via email on Wednesday.

"The appointment of Yao aroused general appreciation, in particular for the way in which the celebration happened," said Spadaro.

"It is a good starting point and can also be a positive model for others who should follow in the medium term," Spadaro told the Global Times on Wednesday.

"The ordination of the two bishops is the best proof that the Catholic Church is developing well in China with support from the Chinese government," Bishop Shen Bing, a deputy chairman of the Chinese Catholic Patriotic Association, told the Global Times.

He said the ordination is a good start for China to elect and ordain more bishops, as it is a successful example of relevant formalities and procedures.

China faces a shortage of bishops, with around a third of the country's 98 dioceses having no bishops, and many of the older bishops are about to retire. Elections have been promoted in dioceses in Central China's Hubei Province, and East China's Shandong and Zhejiang provinces.