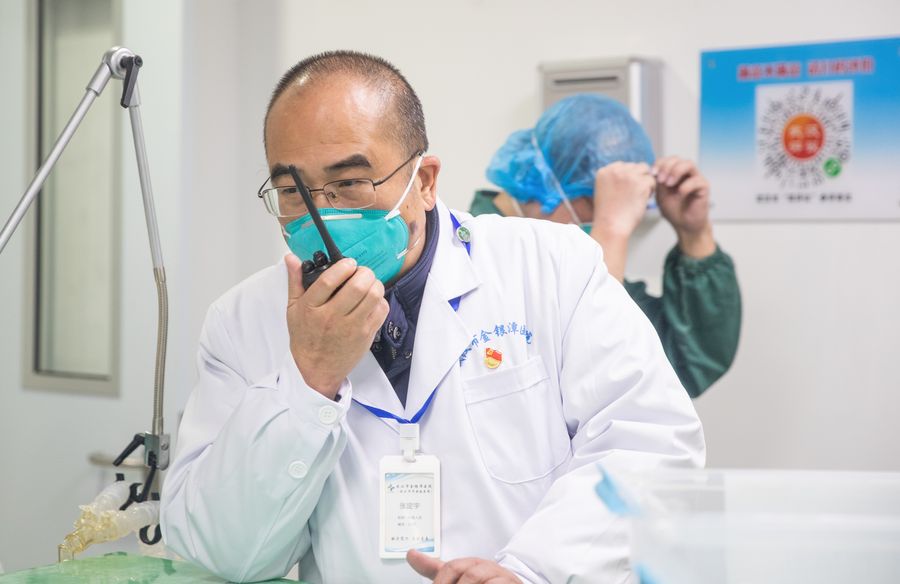 The Jinyintan Hospital in Wuhan, Central China's Hubei Province has been fighting the COVID-19 epidemic on the frontline for 119 days since the contagious infection-focused hospital received the first suspected case on December 27, 2019.

The number of hospitalized COVID-19 patients in Wuhan dropped to zero on Sunday. The Jinyintan Hospital is also under sterilization and is expected to soon reopen to patients of other diseases.

The possibility is very slim that another large outbreak would occur in Wuhan, Zhang Dingyu, head of Jinyintan Hospital, said during an exclusive interview with the Global Times on Friday, noting that the hospital will set up an area to treat sporadic COVID-19 cases after patients are all discharged.

The Jinyintan Hospital has been quiet and empty. Zhang did not even bother to wear a mask when he was alone in his office.

According to Zhang, the Jinyintan Hospital has not started to receive patients with other diseases. After COVID-19 patients are discharged, the whole hospital will conduct sterilizations, then begin to receive other contagious patients, such as those with tuberculosis, AIDS and hepatitis.

"We will set up one or two inpatient areas to receive sporadic COVID-19 cases," Zhang said, adding that "the existence of COVID-9 patients here will not interfere with normal work in the hospital."

Jinyintan Hospital had 21 employees infected with the COVID-19 during the epidemic, including nine medical staff. Zhang mentioned the frontline medical staff are very tired. He is arranging for them to rest and quarantine. "Everybody thought it was glorious to work on the frontline. Many demanded to participate," he said. "Our medical staff have been in high spirits. Nobody stepped away."

Zhang held a reserved attitude toward the claim that "another outbreak of the novel coronavirus in autumn and winter will emerge again."

"If the current prevention and control measures could be continued, it is very unlikely that a large-scale outbreak in Wuhan would recur. There will only be some sporadic cases or a small number of cluster cases."

Zhang said that the COVID-19 epidemic is rare in human history but will not be normalized.

Contagious diseases are not necessarily the main threat to human health, asserted Zhang. Because of the relatively large number of infections and the lack of particularly good treatment, COVID-19 has caused global panic. "Humans are very forgetful. Scars will soon heal, and the pain will be forgotten," said Zhang.

Zhang noted that a pandemic like COVID-19 is "the first and certainly the last one" in his career. Such a pandemic only occurs on Earth one or two centuries, such as the Black Death in Europe and the 1918 Flu, he said.

But Zhang also noted that medium-scale contagious diseases, such as H1N1 in 2009 and H7N9 in 2017, will appear every three to five years, or potentially every one or two years.

Medical staff all have a strong occupational sensitivity. Not only has Jinyintan Hospital made contributions, but other hospitals in Wuhan responded during the early stage of the pandemic.

On December 27, 2019, a patient from Tongji Hospital was transferred to Jinyintan Hospital, and then Xinhua Hospital transferred seven similar patients with a history of exposure in the Huanan Seafood Market.

Zhang decided to conduct bronchoalveolar lavage on patients as soon as he could to collect samples, which were then sent to the CDC of Dongxihu district and Wuhan Virology Institute for testing.

If these actions weren't taken, it may have resulted in more cases of infection.

Zhang attributed the correct measures of Jinyintan Hospital to measures "taken by other hospitals." The Wuhan Central Hospital has collected the bronchoalveolar lavage samples twice and sent them to a third-party testing institution to get the gene sequence. They concluded that the new virus is connected with SARS.

In addition, Hubei Xinhua Hospital performed a pharyngeal swab test on seven patients with similar symptoms in the hospital, and no pathogen was detected.

Zhang recalled that this was the second hint.

Comparing the different results of the two hospitals, after analysis and judgment, Jinyintan Hospital decided to use bronchoalveolar lavage for sample collection.

Bronchoalveolar lavage is an invasive operation. "If our hospital had not done it, it would have been negligence on our part."

Some medics of Jinyintan Hospital recalled that Zhang became emotional and cried at a general meeting of the hospital. With patients flowing into the hospital, "more patients turned critical and critical patients were dying, I felt like my hands were tied," said Zhang.

Medics felt helpless and under pressure when receiving and treating patients. Although medics have seen many deaths in their careers, the COVID-19 epidemic is different as patients were constantly dying of the same disease in such a short period of time, he said.

"After taking some measures, patients, especially critical patients of other epidemic disease would turn better. But neither invasive respirators nor extracorporeal membrane oxygenation (ECMO) could save COVID-19 patients, which made medics helpless," Zhang said.

Zhang convened a general meeting to encourage and mobilize everyone in the hospital to save the city and the world.

Four months after the lockdown, Zhang said the horror would disappear in a period of time because "some effective measures were taken later including finding more methods to save severe and critical patients. More critical patients were saved and less of them were dying."

Zhang said the strategy is not a single method or medical therapy but combined measures. "City lockdown, Fangcang makeshift hospitals, medical therapies to severe and critical patients and support from the national level all played a role."

Jinyintan Hospital will keep receiving patients, but Zhang is handling the situation with confidence. He said, "You can still find strengthen and confidence from helplessness. Otherwise you will not survive. The strength is from confidence to our country and medical workers, which makes us believe the epidemic could be defeated."

The combined measures included the support of medical teams from other provinces. From January 29 to February 25 before the arrival of the medics from the Chinese People's Liberation Army (PLA), Jinyintan Hospital had a shortage of medical workers. "We need doctors and need more nurses," said Zhang.

As many as a dozen medical teams supported Jinyintan Hospital, including those from the PLA, Shanghai and other provinces. Zhang said he felt appreciation and was moved by their support.

Zhang said there was no option for medics in Wuhan as it is their mission and duty, but these medical team members from all over China chose to come to Wuhan. Medical workers from the PLA and other provinces came to lend their support without hesitation.

Medical teams received flowers and appreciation during and after fighting the epidemic in Wuhan. They were given an honorable salute upon leaving. Airports set up water arches to welcome them and provincial leaders visited them to hold meetings to spread their stories. However, medical workers in Wuhan are still fighting in the "battleground," and it seems that people have forgotten the hard time Wuhan medical workers went through when the epidemic first broke out.

Zhang said he believes that Wuhan medical workers were protecting their own city and medical teams were protecting their compatriots. They were serving the same purpose, and they are all heroes. Zhang said that in addition to spiritual encouragement, the national and local government and hospitals gave great support to medical workers such as subsidies.

During the epidemic, Zhang concealed that he was suffering from amyotrophic lateral sclerosis (ALS) and worked on the frontline. He was praised as the "Superman President" by his colleagues in the hospital.

When the Wenchuan earthquake broke out in 2008, Zhang took the initiative to apply for a frontline job. From 1997 to 1999, he went to work in a medical team in Algeria for two years. He was also the first who joined a Doctors Without Borders program in Hubei Province and participated in a medical project in Pakistan.

Zhang expressed the belief that a doctor is a humanitarian cause and a noble profession, so he makes conscious efforts to serve others. When he participated in the Doctors Without Borders program, Zhang found that doctors and nurses are very idealistic and compassionate, feeling happy when helping others.

However, in the face of COVID-19, he felt more deeply that the strong mobilization mechanism of the country was the decisive factor in overcoming the epidemic.

"It's a chronic disease, but now I'm being told that it may suddenly accelerate," Zhang said of his ALS. Apart from walking with a slight limp, there was no sign that Zhang was a patient, and he never felt like one.

"Getting sick is a very personal thing. I didn't report it to my superior organization because I might have been exempted to work because of ALS, so I had to get those things done first," he said.

Zhang said that the hospital's leaders have not been quarantined for vacation; he hopes to take a vacation soon. But he is still buried in the work of the hospital.

"There will be some improvements in the hardware and software of the hospital after the epidemic. In terms of hardware, the hospital will build a 33,000 square meters of emergency ward building, which will play an important role in the control of infectious diseases in the future. There are also renovation works for the outpatient and ward buildings," he said.

Zhang said the key to improving soft power is attracting talent. The hospital has built a platform for a translational medicine center, which runs a drug clinical trial institution, a post-doctoral mobile station, and a joint institute with the Chinese Academy of Sciences and the Chinese Academy of Medical Sciences.

"My biggest hope is that we can attract some aspiring medical students or doctors to join our team through the platform. There is still a lot we can do," Zhang said.