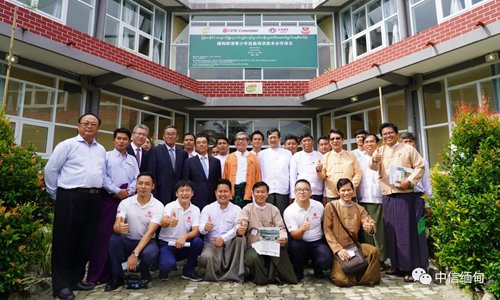 “Congratulations to all trainees on winning this valuable training opportunity from among the many applicants. As the saying goes, skills come from practice. I hope all trainees could persevere and achieve success,” said Ma Chuanfu, Deputy General Manager of CITIC Myanmar.

With the theme, “Capacity Building for a better life, Seeds for Kyaukphyu's Future,” the program will provide free training for local youngsters to improve their comprehensive language capabilities.

“CITIC Consortium will continually carry out public welfare programs including training to promote the development of vocational education and livelihood of Kyuakphyu according to local needs,” Ma said.

Township elder U Tun Nu said that Chinese language speakers account for 1/5 of the world's population, and more Chinese companies will invest in Kyaukphyu in the future and emphasized, “it is very necessary for the younger generations to learn Chinese.”

Nu also expressed his appreciation to CITIC Consortium and the management committee for their contributions.

The first phase of the program, launched in September, included basic electric technical and English courses, was successfully carried out and benefitted over 90 local trainees.

Centered on local requirements and suggestions, the program’s second phase was well-received by local communities. Nearly 180 applications were submitted during a five-day period, reflecting the high recognition the program has received as well as strong local enthusiasm to learn Chinese.

During the preparation and implementation stages, CITIC Consortium adhered to the principle of “Openness, Transparency and Local Priority.”

Before development started, members from all local communities were invited to offer their suggestions. The program management committee, composed of mainly local residents, was responsible for the implementation that included candidate enrollment and other general work.