Second-phase political farce of the 'Uygur Tribunal' ironic and ridiculous, shows no respect to 9/11 terror victims 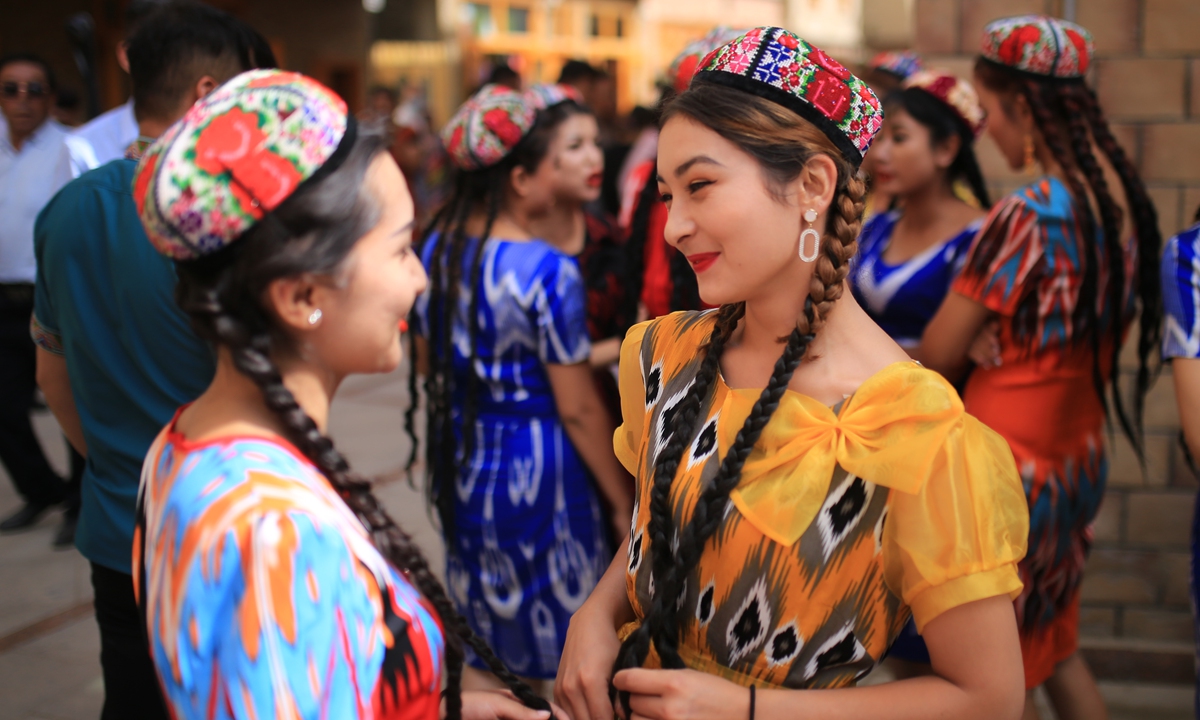 Women in traditional garb chat in Tuancheng during a break from a group dance during the Corban Festival in Hotan. (Photo: Global Times)

The political farce and the pseudo-court of the so-called Uygur Tribunal will have its second "hearing" starting Friday, just one day before September 11, a time which should be used to commemorate the 20th anniversary of the terror attacks in the US.

However, it is being used by terrorists and anti-China forces to smear China's anti-terrorist efforts in the Xinjiang region where thousands had made sacrifices in the fight against terrorism.

On Thursday, the regional government of Northwest China's Xinjiang Uygur Autonomous Region and the Chinese Embassy in the UK held a joint press conference in Beijing to expose lies, and refute more than 20 lies related to the Xinjiang region, ranging from rumors on "imposing" women for sterilization, using "forced labor," to the lie of the century of committing "genocide" in Xinjiang.

The "Uyghur Tribunal," which is neither a legitimate legal body nor has the right to review accusations of genocide against a country, was held on June 3 in London with one-sided voices and fabricated stories of alleged victims from China's Xinjiang during the first "hearing."

The second "hearing" is scheduled on Friday with another group of "actors and actresses" getting together with anti-China forces to stage a new farce in an attempt to offer sensational but fake materials to Western media and make stories about the "evil China," analysts said.

"The so-called tribunal was set under the conclusion of anti-China forces from the US and the West with the 'World Uyghur Congress' [WUC] and other 'East Turkistan' terrorist groups; it has no legal right to hold 'hearings' nor charge a country for one of the most severe genocide crimes. It gets money mainly from the WUC and presets guilty conclusions, using the lies of a bunch of anti-China 'scholars' and 'actresses and actors' to fool the public," said Xu Guixiang, a spokesperson of the Xinjiang regional government, at the press conference.

The spokesperson noted at the press conference that the so-called tribunal, under the banner of laws, has become a machine that makes and spreads lies to smear China, interfere with its domestic affairs and contain it by disturbing its Xinjiang region. It profaned international laws.

According to online information released by the "Uyghur Tribunal," the so-called witnesses scheduled to attend the second "hearing" on Friday include a woman who "testified on behalf of her husband" about his experiences of being "interrogated in a tiger chair." Another is a "witness" who had a phone conversation from Japan with one of their brothers, who was apparently being held by agents of the Chinese state. There is also a "witness" who claims to be a former employee of a statistics bureau from Xinjiang, in addition to another one who previously worked in a hospital in Xinjiang.

"How could these so-called witnesses prove their identities? Are they real doctors or employees from the statistics bureau as they had claimed? Maybe this is the least question that those people gathering at the 'pseudo-court' care about as they just want to use these sensational fake stories to smear China," Wang Jiang, a distinguished research fellow at the Institute for Frontier Region of China of the Zhejiang Normal University, told the Global Times on Thursday.

Wang noted that the purpose of so-called victims is to "prove" China is committing "systematic persecution against ethnic groups," but it is totally not true.

During the first "hearing" in June, so-called "victims" who had appeared in the Western mainstream media told sensational stories on how they had been "persecuted" in Xinjiang. However, their lies had been refuted by Xinjiang regional government and the Chinese Foreign Ministry many times. For example, one of the "victims," Tuerxunnayi Ziyaodeng, claimed to have been detained at a training center and said she was forcibly sterilized. But she has contradicted herself, and her passport was renewed in March 2019, during the period she claimed she was in detention.

Gulibahaer Maihemutijiang, who uses the name Gulbahar Haijiti in the West, claimed she was lured back to China and faced a seven-year prison term, and was tortured during detention. But records showed she returned for personal reasons and was found to be involved in organizing secessionist activities including the 7/5 Urumqi riots that took place on July 5, 2009 in the regional capital. She told the police she regretted not having revealed her husband's secessionist behavior, and the police decided not to prosecute her. Gulibahaer exposed her real nature soon after she left China using the excuse of taking care of her pregnant daughter in 2019.

Except for weak, flawed and ever-changing "testimonies" from so-called "victims," there has never solid evidence to support any accusations against China.

There is no evidence of genocide in China's Xinjiang, no large number of Uygur refugees from China, no pictures to support these accusations except for satellite images of some buildings with security facilities, Graham Perry, a British solicitor and international arbitrator, said at the Thursday press conference.

The British lawyer said that the reasons for the US and the West to accuse China of committing "genocide" are to damage China's image and contain it. "From Trump to Biden, from Pompeo to Blinken, what the US wants is to stain China's progress," said Perry. 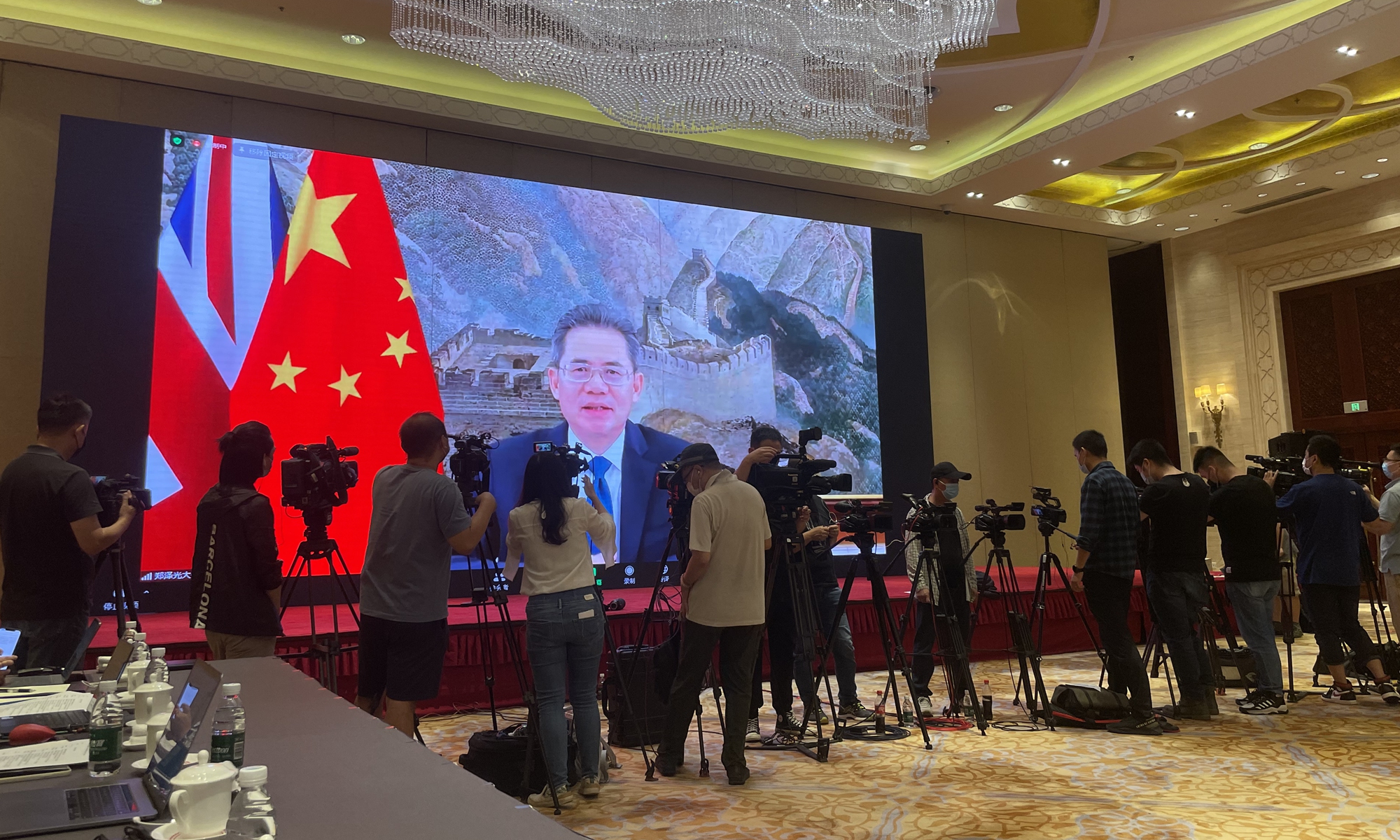 Photo: The Xinjiang regional government of Northwest China's Xinjiang Uygur Autonomous Region and the Chinese Embassy in the UK holds a joint press conference in Beijing on Thursday.

Colluding with each other

The World Uygur Congress is the largest donor to this so-called tribunal. According to the introduction on the WUC website, in June 2020, the anti-China secessionist and president of the WUC formally requested that Geoffrey Nice, an infamous anti-China figure, establish and chair a so-called independent people's tribunal to investigate "ongoing atrocities and possible genocide" against the Uygurs, Kazakhs, and other Turkic Muslim populations. The tribunal was launched on September 3, 2020.

According to data available on the website of the so-called tribunal, the money it has raised so far is limited. Chinese Foreign Ministry spokesperson Zhao Lijian told a press conference in May that it attempted to raise 50,000 pounds ($68,795) but only managed to get 7,000 pounds for as long as three months, which showed how unpopular it is.

The WUC, a US-based anti-China organization established in 2004, was transformed from the "World Uyghur Youth Congress" (WUYC), an organization classified as a terrorist group by the Chinese government authorities. Dolkun Isa, leader of the WUC, was also part of the WUYC. The main members of the WUYC and its affiliated organizations have been actively engaging in terrorist activities.

Nice also earned infamy by getting involved in illegal activities. He participated as a prosecutor in the case against Slobodan Milosevic, the former Serbian leader who was later removed from office for "war crimes and genocide" at the International Criminal Tribunal. But Andy Wilcoxson, who had closely followed Milosevic's trial, wrote in a 2017 report that no evidence supports the charges against China and all are made for political purposes.

In 2009, Nice was criticized by the Privy Council for his unfair handling of the trial of St. Helier-based accountant Peter Michel, who was jailed in 2007 for six years after being convicted of 10 counts of money laundering. The Jersey Evening Post wrote on November 6, 2009 that the "extraordinary failings" of Nice may cost taxpayers several million pounds.

Nice was also the co-author of the infamous Caesar Report. He and several others made flimsy reports about the situation in Syria based on insufficient evidence, which led to US sanctions. The unilateral sanctions did not protect civilians in Syria but led them to hunger and death.

Another individual that served as a lawyer for the alleged tribunal is Rodney Dixon. He was the lawyer of Taoufik Bouachrine, a journalist in Morocco involved in a sex scandal. Dixon was later accused by Moroccan society for making lies and lacking professionalism during the argument of the defense. Three months later, he was fired by the journalist's family for making no progress in the case.

While the stunt of the "Uyghur Tribunal" is being staged, the world is also observing the 20th anniversary of the September 11 terror attacks. The so-called tribunal, with close links to terrorists, has shadowed the moment that should be used to speak out against terrorism. This shows that the "tribunal" has no respect to the people whose lives have been cut short by terrorism in the US, in China's Xinjiang and in many other places around the world, analysts said.

"How ironic and ridiculous it is to see terrorists from China's Xinjiang whitewash themselves by maliciously slandering China! Such a pseudo-court has been staged in a Western country with the US' support, trying to picture the perpetrators as alleged victims, calling white black and confusing right and wrong," said Wang.

With all these infamous anti-China individuals colluding with terrorists, there is nothing related to justice that would come out of the so-called tribunal, but lies. As Graham Perry told the Global Times in a previous interview, the "tribunal" is only an anti-China event and people behind it want to convict China on charges of genocide without even reviewing the evidence.