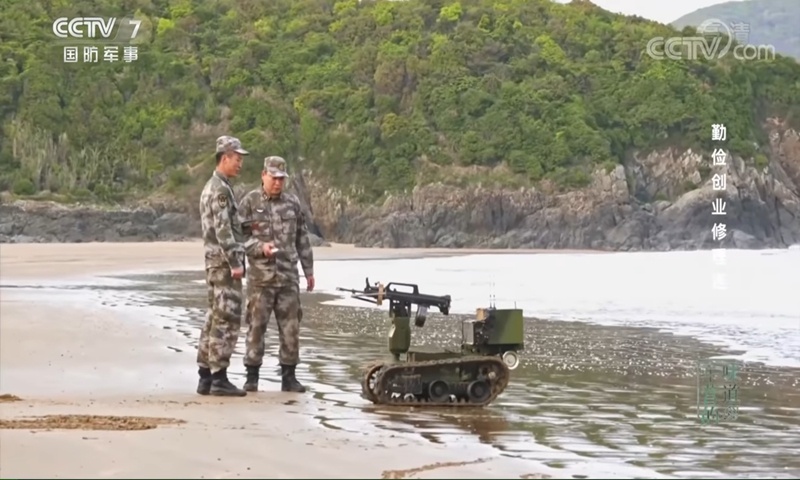 Out of the rising requirements in patrol operations, Captain Zhou Jianlong, deputy commander at a maintenance company under a coastal defense brigade affiliated with the PLA Eastern Theater Command Army, came up with the idea in 2019 of developing a remote-controlled vehicle that can conduct all-terrain patrols and reconnaissance missions on beaches and send data to the command center, China Central Television (CCTV) reported.

Zhou's brigade covers the over 6,000 kilometers of coastline of East China's Zhejiang Province, including many islands, according to CCTV.

The vehicle is equipped with cameras, runs on rubber tracks, and is armed with a customized Type 95 auto rifle as its turret, the report said.

It not only relieves pressure on troops but also provides more detailed information through its camera during patrol, CCTV said, noting that the robot has entered a combat testing phase and will soon enter service.

"As the PLA, including my unit, constantly updates weapons and equipment, we cannot use old, outdated mindsets in maintenance missions anymore. Innovation is not only reflected in equipment, but also in our own minds," Zhou was quoted as saying about his creation.

While the PLA has been commissioning many types of advanced drones and robots for a variety of missions, most of them are designed by professionals and produced by the arms industry. Zhou's robot shows that technical personnel in the PLA are also capable of making combat-ready and practical high technology equipment, a Chinese military expert told the Global Times on Tuesday, requesting anonymity.

Modernization of the PLA is at all levels, including the grassroots, with ordinary soldiers and officers also up to the challenge of modern warfare, the expert said.