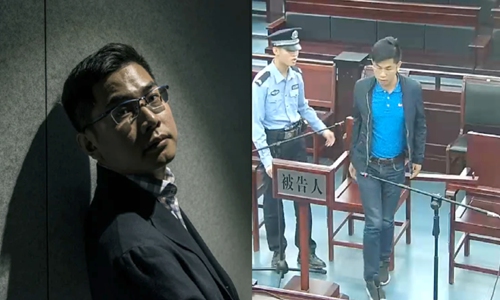 The self-proclaimed Chinese spy Wang Liqiang who applied for political asylum in Australia confessed his fraud case involving 120,000 yuan ($17,000) in a Chinese court in 2016, admitting he had "a weak legal awareness," a video the court exclusively sent to the Global Times on Wednesday showed.

Wang was tried in the People's Court of Guangze county, Nanping, East China's Fujian Province in 2016, where he confessed to defrauding the sum, according to the video.

Born in Guangze county, Wang was a university student back in 2016. He was taken under custody on March 4, 2016, for suspected fraud and granted bail for the pending trial. Wang stood trial on October 14, 2016.

Prosecutors said in June 2015, Wang got to know the victim, known only by the surname of Gao, through his girlfriend and obtained his trust.

In July 2015, Gao was handling the school affairs of his son and daughter.

Wang defrauded Gao of 25,000 yuan on the grounds that he could help Gao handle the schooling but needed money.

Later at Gao's demand, Wang returned Gao 35,000 yuan. After his deeds were exposed, Wang turned himself in and confessed to his crimes.

Wang raised no objection during the trial and stated in the final stage of the trial that he had "a weak legal awareness" and "hoped for a lenient punishment from the court," the video shows.

Wang was eventually sentenced to jail for a year and three months, with a reprieve of a year and a half, plus a fine of 10,000 yuan, to which he offered no objection.

Less than four years later at the beginning of this year, Wang was again suspected of fraud and the amount involved was "very large," according to the latest information released by Shanghai police.

Police said Wang committed a fraud of more than 4.6 million yuan in February on a fictitious investment project for imported automobiles.

On April 19, Shanghai's public security bureau filed a case against Wang on suspicion of fraud.

Wang, now at large, maintained his fraudulent activities in foreign countries, making up a series of fake stories that throw shade at China backed by Western media speculation, observers said.

All the evidence points toward the fact that Wang is merely a fraudster spouting nonsense and mixing up black and white, observers said.

"It is clear that 'fraudster turns spy' is an absurd and flawed 'script' written by anti-China forces," Zhu Fenglian, spokesperson of China's Taiwan Affairs Office of State Council said at a press conference on Wednesday. Shanghai police earlier said Wang is an ex-con who spent time in prison for fraud and is wanted in connection with another fraud case in the city.

The Democratic Progressive Party (DPP) in Taiwan is using Wang's fraudulent confession to create the illusion that "the mainland is involved in the elections in Taiwan," Zhu said.

Zhu noted that many Taiwan people doubt the claims made by DPP authorities, and believe Wang's false confession is being used by the DPP as an election trick.

On Saturday, The Sydney Morning Herald reported that Wang had "defected" to Australia. The newspaper said Wang was ordered to "shift his attention from a covert operation to undermine Hong Kong's democracy movement and focus instead on meddling in Taiwan's 2020 elections."

However, Shanghai police said on Sina Weibo Saturday that Wang is wanted for involvement in a fraud case involving 4.6 million yuan ($653,000). He was previously sentenced to 15 months in prison in 2016 for fraud.

Wang left for Hong Kong on April 10, the police said, noting that his Chinese passport and Hong Kong permanent resident identity documents were forged. He is said to be 26 years old and from Nanping, East China's Fujian Province and his wife and child have apparently emigrated to Australia.

The Australian report said Wang is a very senior and important intelligence officer.

"How could a 26-year-old man with a wife and son living in Australia be [a spy]," Li Haidong, a professor at the China Foreign Affairs University's Institute of International Relations, told the Global Times.

The only explanation is that Wang is now conning the Australian government into believing he is a spy in order to get political asylum, Li said.

Since the beginning, Wang has been talking nothing but nonsense, said Wong Yen-ching, a former deputy director of Taiwan's intelligence agency, Taiwan's United Daily News reported on Sunday.

Wong said Wang's fake spy story can easily be discerned from his interview with the media as what he said shows he has only a very weak understanding of China's intelligence organizations and his knowledge probably only comes from TV shows.

Wong listed 10 loopholes in Wang's claims, including Wang's failure to acknowledge the name change of China's Central Military Commission General Staff Headquarters to the Joint Staff Department. Neither did Wang know which exact organization under the department is engaged in intelligence activities.

Wang also does not have a military rank and there was no way a mainland spy would be assigned missions in multiple locations, namely Hong Kong and Taiwan at the same time, Wong said, noting that if Wang was really a spy, the Australian side would carefully protect him and give him a new identity, and not allow him to talk to the media.

When an agent is in the field, he or she will often use fake identities, but only one a mission, Wong said, noting that carrying multiple fake identities is easily spotted, and Wang must have watched too many movies to think this was a good idea.