BEIJING, Nov. 26 (Xinhua) -- Yang Jiechi, a member of the Political Bureau of the Communist Party of China (CPC) Central Committee, on Friday met via video link with Abdulla Shahid, president of the 76th session of the UN General Assembly (UNGA) and foreign minister of the Maldives. 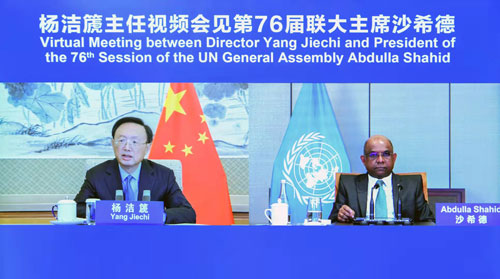 Yang, also director of the Office of the Foreign Affairs Commission of the CPC Central Committee, said that the only way out of the complex problems the world is facing is maintaining and practicing true multilateralism, and promoting a global community with a shared future.

He said China will always be committed to the ideals of the United Nations, support multilateralism, and work with other countries to make new contributions to world peace and development.

For his part, Shahid voiced support for the Global Development Initiative proposed by China and China's hosting of the 2022 Beijing Winter Olympics, adding that the United Nations is ready to jointly safeguard multilateralism with China.