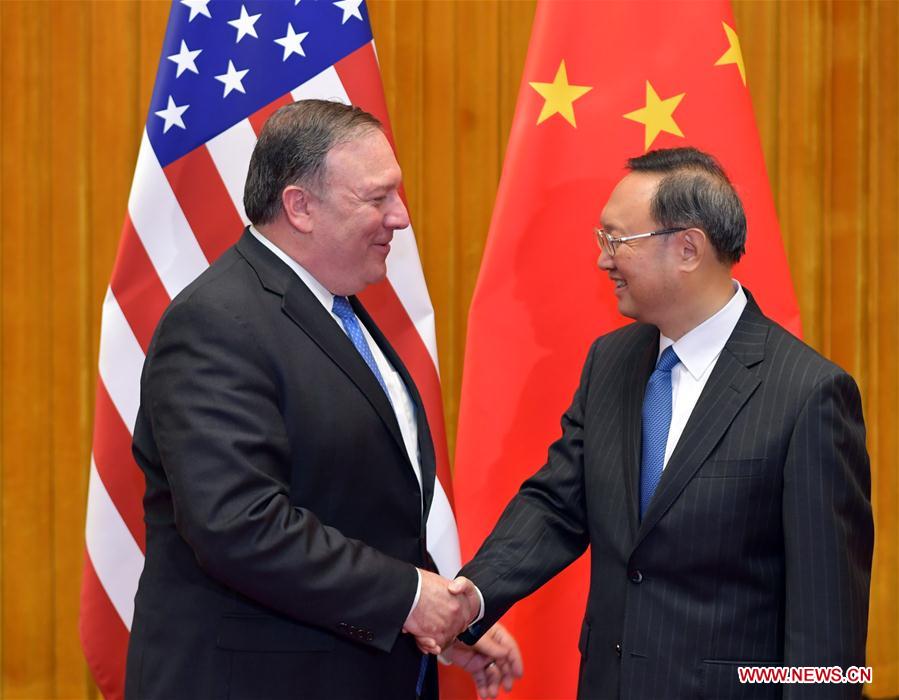 Yang Jiechi, a member of the Political Bureau of the Communist Party of China (CPC) Central Committee, who is also director of the Office of the Foreign Affairs Commission of the CPC Central Committee, meets with U.S. Secretary of State Mike Pompeo in Beijing, capital of China, June 14, 2018. (Photo: Xinhua)

BEIJING, Dec. 7 (Xinhua) -- Yang Jiechi, member of the Political Bureau of the Communist Party of China (CPC) Central Committee and director of the Office of the Foreign Affairs Commission of the CPC Central Committee, held a phone conversation with U.S. Secretary of State Mike Pompeo on Saturday.

Noting that the United States had allowed the so-called "Hong Kong Human Rights and Democracy Act of 2019" to become law and the House of Representatives of the U.S. Congress to pass the so-called "Uygur Human Rights Policy Act of 2019," Yang said U.S. officials have repeatedly made statements that distort and attack China's political system and internal and external policies.

"China firmly opposes and strongly condemns these acts," he said.

Over the past 70 years since the founding of the People's Republic of China, great achievements which have attracted worldwide attention have been made, Yang said, adding that it is under the leadership of the CPC that the Chinese people have found a path of development suited to China's national conditions.

China's determination to defend national sovereignty, security and development interests is unwavering and no one should expect China to swallow anything that undermines its own interests, Yang said.

Yang said that China urges the U.S. side to come to a clear assessment of the situation, correct its mistakes and immediately stop slandering China and interfering in China's internal affairs.