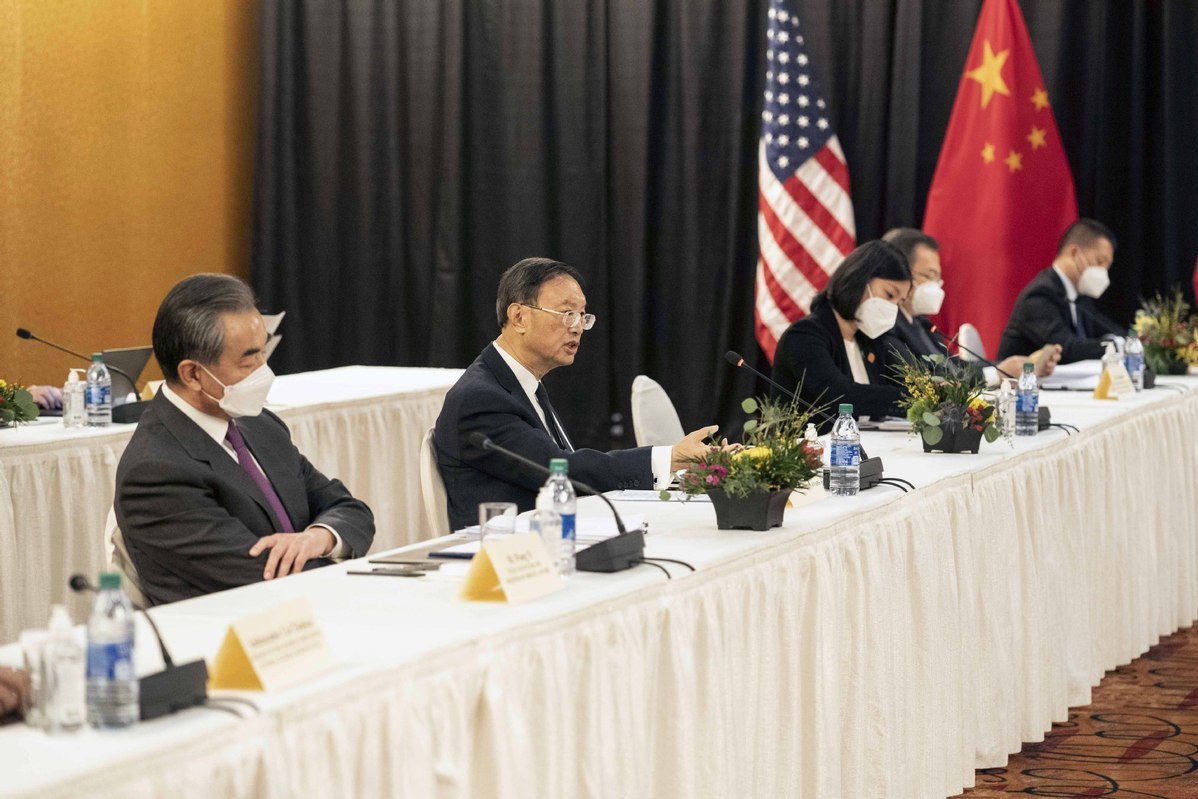 Yang Jiechi, a member of the Political Bureau of the Communist Party of China (CPC) Central Committee and director of the Office of the Foreign Affairs Commission of the CPC Central Committee, puts forward China's stands on relevant issues at the start of the high-level strategic dialogue with the United States in the Alaskan city of Anchorage on March 18, 2021. (Photo: Xinhua)

ANCHORAGE, the United States, March 18 (Xinhua) -- The United States should stop its interference in China's internal affairs, and avoid confrontation between the two major countries, said a senior Chinese official here on Thursday.

Yang Jiechi, a member of the Political Bureau of the Communist Party of China (CPC) Central Committee and director of the Office of the Foreign Affairs Commission of the CPC Central Committee, made the remarks at the start of a two-day high-level strategic dialogue with the United States in the Alaskan city of Anchorage.

Following the opening remarks of the US side, Yang spoke first, emphasizing that on the eve of the Chinese lunar new year, Chinese President Xi Jinping held a successful telephone conversation with his US counterpart, Joe Biden.

Yang noted that the two leaders agreed that both sides should strengthen communication, manage differences and expand cooperation, which is of great significance in guiding the growth of China-US relations in the time to come.

China's attendance to the high-level strategic dialogue at the invitation of the US side in Anchorage is an important step to implement the consensus reached by the two heads of state in their phone talks, and the dialogue was decided by the two presidents personally, Yang said.

The Chinese and American people, as well as the wider international community are looking forward to practical outcomes from the dialogue, he added.

Noting that the Chinese side hopes that the dialogue would be candid and frank, Yang said as major countries of the world, China and the United States shoulder responsibility for global and regional peace, stability and development.

During the just concluded sessions of its national legislature and political advisory body, China adopted the Outline of the 14th Five-Year Plan (2021-2025) for National Economic and Social Development and the Long-Range Objectives Through the Year 2035, Yang said, pointing out that China now stands at a historical juncture where the timeframes of its two centenary goals converge.

China will basically achieve modernization by 2035 and develop itself into a great modern socialist country by 2050, he said.

China has made major strategic achievements in its fight against the COVID-19 pandemic, achieved comprehensive victory in eradicating poverty, and made great historical achievements in building a moderately prosperous society in all respects, he stressed, adding that the Chinese people unite more closely around the CPC Central Committee with Xi at the core.

The United States has its own model of democracy, and China has its own style, he noted, adding that unlike the United States, which willfully uses military forces, and causes instability and unrest worldwide, China is committed to the path of peaceful development and has made unremitting efforts to promote international and regional peace and development, and uphold the purposes and principles of the UN Charter.

The United States has many domestic problems in areas like human rights, said Yang, adding that what the United States should do is to improve its image and mind its own business, rather than leaving its own problems unsolved, shipping its problems to other parts of the world, diverting attention of others, and making irresponsible remarks about China's human rights and democracy.

Yang added that the CPC's leadership and China's political system enjoy the wholehearted support of the Chinese people, and any attempt to change China's social system is futile.

Yang said China and the United States are both major countries in the world, and share tremendous common interests in fighting the COVID-19 pandemic, resuming work and production and tackling climate change.

He said it is hoped that the US side will change its zero-sum mentality, abandon such wrong practices as "long-arm jurisdiction", and does not abuse the concept of national security to interfere with normal trade between the two countries.

China and the United States should develop good relations with all countries in Asia-Pacific and have common friends, said Yang, adding that this is how the world works in the 21st century.

Noting that Taiwan, Hong Kong and Xinjiang are all inalienable parts of China, Yang said Beijing firmly opposes US interference in China's internal affairs and will continue to make firm responses.

The United States is not qualified to talk to China in a condescending manner, and the Chinese people will not accept that, said Yang, adding that it must be based on mutual respect to deal with China, and history will prove that those who seek to strangle China will suffer in the end.

He said many achievements have been made since the "ice-breaking" of China-US relations, which are accomplished by the joint efforts of people with vision on both sides and are hard won.

He also noted that Xi has pointed out that China and the United States should be committed to non-conflict, non-confrontation, mutual respect and win-win cooperation, and Biden also said that the two countries should avoid conflict and confrontation with each other.

The two sides should fully and correctly implement the consensus reached by the leaders of the two countries so as to return China-US relations to the track of healthy and stable development, Yang said.