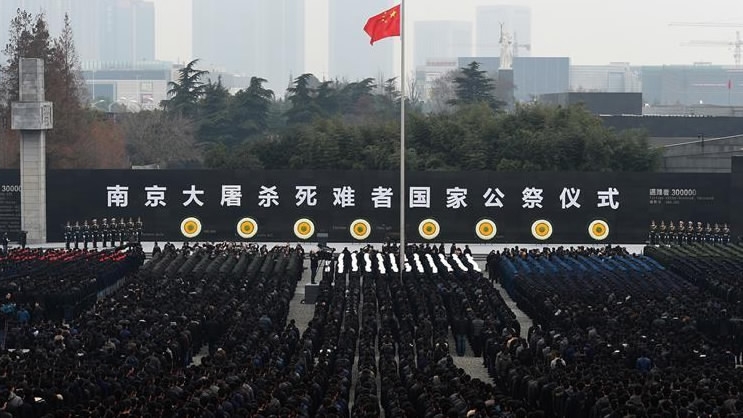 NANJING, Dec. 13 (Xinhua) -- A senior Communist Party of China (CPC) official said Friday that China wishes to stay on the path of peaceful development as it held a national memorial ceremony to mourn the 300,000 victims of the Nanjing Massacre.

The Chinese people are resolute to keep the history firmly in mind, never forget the past, cherish peace and build the future, Huang said.

He said those victims and martyrs can feel comforted by the great achievements toward prosperity and strength made by the Chinese people under the leadership of the CPC in the past decades since New China was founded in 1949.

"No force can stop the Chinese people and the Chinese nation from forging ahead," Huang said.

At the ceremony, China's national flag flew at half-mast. At around 10 a.m., sirens started to blare. On the streets, drivers parked their cars and honked; pedestrians stood still and observed a moment of silence.

A total of 82 young people recited a declaration of peace and citizen representatives struck the Bell of Peace. Thousands of white doves representing hope for peace were released to fly over the memorial square of the Memorial Hall of the Victims of the Nanjing Massacre by Japanese Invaders.

Pinning a white flower, more than 8,000 people from all walks of life attended the ceremony.

In 2014, China's top legislature designated Dec. 13 as the national memorial day for the victims of the Nanjing Massacre, which took place when Japanese troops captured the city of Nanjing on Dec. 13, 1937 and brutally killed around 300,000 Chinese civilians and unarmed soldiers in over six weeks, making it one of the most barbaric episodes of World War II.