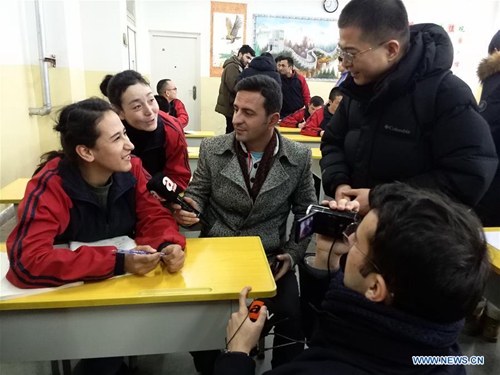 URUMQI, Feb. 25 (Xinhua) -- Senior diplomats from permanent missions of eight countries to the United Nations Office at Geneva visited Xinjiang Uygur Autonomous Region from Feb. 16 to 19 at the invitation of the Chinese Ministry of Foreign Affairs.

The diplomats from Pakistan, Venezuela, Cuba, Egypt, Cambodia, Russia, Senegal and Belarus, spoke with trainees at vocational education and training centers, teaching clerics and other members of the public during their visit.

They agreed that the Chinese government has made achievement in cracking down on and preventing terrorism according to law, safeguarding the religious freedom of its citizens and conserving ethnic tradition and culture.

Since the 1990s, the "three forces" of terrorism, separatism and extremism both at home and abroad plotted and organized thousands of violent terrorist activities and gravely damaged the stability, solidarity and progress of Xinjiang, trampling the basic human rights to life, health, property and development for the people in Xinjiang.

At the Xinjiang International Convention & Exhibition Center, the diplomats watched an exhibition on major terrorist cases in the region.

Nikita Zhukov, the deputy permanent representative of the Russia Federation to the UN Office at Geneva, said he could not bear to look at the video clips and pictures at the exhibition.

"Terrorism should not have been present in modern society like this. It is an absolute demon and must be destroyed," Zhukov said. "It is important to fight terrorism according to law, and the Chinese government has done so."

Pedro Luis Pedroso Cuesta, permanent representative of the Republic of Cuba to the UN Office at Geneva, said the exhibition showed that anyone could become a victim of terrorism.

In recent years, Xinjiang has focused on the prevention of terrorism by striking at the root and source of the problems. It aims to forestall terrorist attacks by providing a platform to the people who have been influenced by extremist thoughts and committed minor crimes so that they can transform their thoughts, learn the Mandarin language, boost legal awareness and master vocational skills.

So far, no violent terrorist activities have been reported in the last 25 months in Xinjiang, authorities said.

Terrorism and extremism sabotaged peace and caused great casualties in Xinjiang. Terrorism, in whatever form, shall not be forgiven, said Sam Ol Ney, permanent representative of Cambodia to the UN Office at Geneva.

At the vocational education and training centers in Kashgar and Moyu counties of Hotan Prefecture, the diplomats inquired in great detail about the life and education of the trainees.

It is foolish to make accusations against these centers where students are learning the necessary skills to improve lives, said Vadim Pisarevich, the deputy permanent representative of Belarus to the UN Office at Geneva.

Jorge Hidalgo Valero Briceno, permanent representative of Venezuela to the UN Office at Geneva, said the accusations were politically charged and made by those who do not believe in the Chinese people.

The purpose of the centers is to boost the capabilities of the people, said Pedro Luis Pedroso Cuesta. People should be educated, otherwise they easily fall victims to those who exploit them for illegal ends, he said.

After observing a class on law, Pisarevich said that it was right for the Chinese government to establish the centers. It is also in line with the principle and spirit of law, he said.

The delegates visited the Id Kah Mosque in Kashgar, the old city of Kashgar and local families.

Serigne Dieye, the minister counselor of the Permanent Mission of the Republic of Senegal to the UN Office at Geneva, said as a Muslim himself, he felt glad to see that the Chinese government has protected religious freedom well.

Facilities for drinking water, heating and bathing at the mosque are all provided by the government, which is a great effort on its part, Dieye added.

Thanks to a large-scale renovation project launched in 2010, residents in Kashgar now enjoy a modern and convenient life in their houses with unique traditional designs.

The renovation project have fully respected the wishes of residents to conserve their culture, setting a good example for other cities, said local representatives.

"In the old city, we see a good combination of traditional culture and modern development," said Zhukov, after talking with a craftsman who makes traditional musical instruments as the fifth-generation inheritor of the craft in his family. His son will continue to carry on the family tradition.