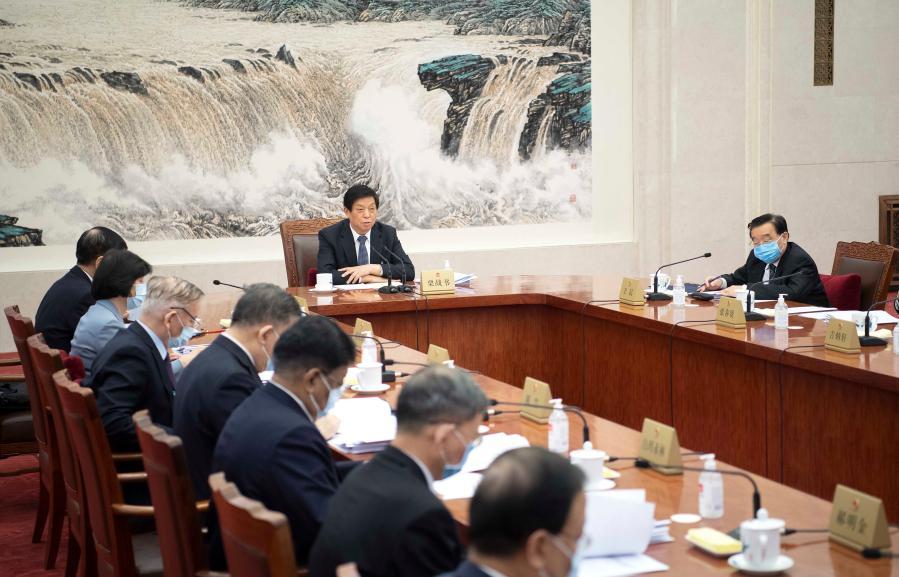 Li Zhanshu, chairman of the National People's Congress (NPC) Standing Committee, presides over the 79th meeting of the Council of Chairpersons of the 13th NPC Standing Committee at the Great Hall of the People in Beijing, capital of China, Dec. 23, 2020. (Photo: Xinhua)

BEIJING, Dec. 23 (Xinhua) -- The Standing Committee of the National People's Congress (NPC) held a meeting of its Council of Chairpersons Wednesday to hear reports on the deliberations of draft laws, law revisions and decisions.

Li Zhanshu, chairman of the NPC Standing Committee, presided over the meeting.

Li Fei, chairman of the NPC Constitution and Law Committee, reported on the deliberations of the draft amendments to the NPC organic law and procedural rules, the draft decision on strengthening the oversight of state assets management and the draft decision on establishing an intellectual property court in the Hainan free trade port.

Proposed voting drafts were prepared by the Constitution and Law Committee based on deliberations.

Zhang Yesui, chairman of the NPC Foreign Affairs Committee, reported on the deliberations of an extradition treaty with Turkey and a draft decision on approving the treaty.

Yang Zhenwu, secretary-general of the NPC Standing Committee, reported on the deliberations of a draft decision on convening the fourth annual session of the 13th NPC. He also reported on deputy qualifications and personnel-related bills.

The meeting decided to submit the above bills and drafts to the ongoing session of the NPC Standing Committee for review.