CHINA Senior legislators from China, Japan agree to push for improvement of ties

Senior legislators from China, Japan agree to push for improvement of ties 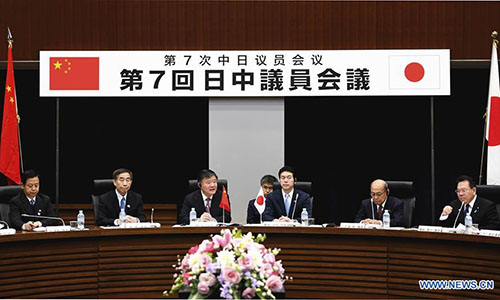 Senior legislators from China and Japan have agreed to push for further improvement of bilateral relations during their meetings which concluded on Wednesday. Chen Zhu, vice chairman of China's National People's Congress (NPC) Standing Committee, led a Chinese delegation to attend the 10th meeting of the cooperation committee between China's NPC and the House of Representatives of the Japanese parliament, and the 7th meeting of the bilateral exchange mechanism between China's NPC and Japan's House of Councillors. The two sides held frank and pragmatic discussions on bilateral relations, parliamentary exchanges, cultural exchanges, environmental protection, disaster prevention and mitigation, as well as regional and international issues of mutual concerns. As this year marks the 40th anniversary of the signing of the China-Japan Treaty of Peace and Friendship, the two sides agreed to take this opportunity to enhance communication in various areas to promote mutual understanding, enhance cooperation and push for continued improvement and development of bilateral relations. Chen, who arrived here on Sunday, also met with Tadamori Oshima, speaker of the House of Representatives of the Japanese parliament, Chuichi Date, speaker of the House of Councillors, Chief Cabinet Secretary Yoshihide Suga, Secretary General of the ruling Liberal Democratic Party Toshihiro Nikai, and Natsuo Yamaguchi, head of the Komeito Party, as well as leaders of seven Japan-China friendship organizations.