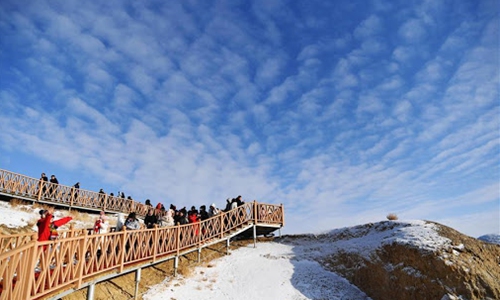 The accusation from a so-called US nongovernmental organization that China  is refusing to renew passports to "force overseas Uygurs to return for detention" is a "complete rumor and was made to slander the passport management measures in Northwest China's Xinjiang Uygur Autonomous Region," a senior official said at a press conference on Wednesday.

In recent years, with the support of some American nongovernmental organizations, the "Uyghur Human Rights Project (UHRP)" has carried out a so-called "Human Rights Investigation" and fabricated a "Human Rights Report" to attack and smear China's policy on Xinjiang under the guise of "academic research" aimed at promoting the so-called "Uyghur Human Rights Movement" and engaging in anti-China separatist activities, Yalkun Yakuf, deputy director of the Department of Public Security, told a press conference.

"Uyghur Human Rights Project" is a main project of the US-backed World Uygur Congress, which is generally believed to seek the fall of China. The project was funded by the National Endowment for Democracy (NED).

By using interviews with so-called individual "claimants," they slander our passport management measures, and cause Xinjiang-native overseas Chinese to misunderstand and question our policy concerning Xinjiang through despicable means with malicious intentions, Yalkun said.

He noted that the absurd accusation that "China uses the refusal to renew passports as a weapon to force overseas Uygurs to return to China for extrajudicial detention or imprisonment" is a complete rumor and gimmick.

Yalkun explained that anyone who is a Chinese citizen without a criminal record and acknowledges their Chinese nationality can apply for a renewal or reissuance of passports in local Chinese embassies and consulates.

"Most passport renewal or reissuance requests by applicants from Xinjiang have been accepted and approved by Chinese embassies and consulates. A very small number of them were refused as their applications failed to meet Chinese laws or they were suspected of being involved in terrorism-related activities," he noted.

Xinjiang administers entry and exit rules in accordance with the law, and cracks down on terrorism and extremism. China's Counterterrorism Law stipulates that "entry and exit permits issuing authority and border control authorities can prevent terrorism-related people or suspects from entering or exiting, and refuse to grant permits or revoke their permits."

"We sincerely hope Chinese citizens living overseas do not believe or spread rumors. Instead, they should place trust in the government that their Chinese passports will be renewed or reissued according to relevant laws," Yalkun said.