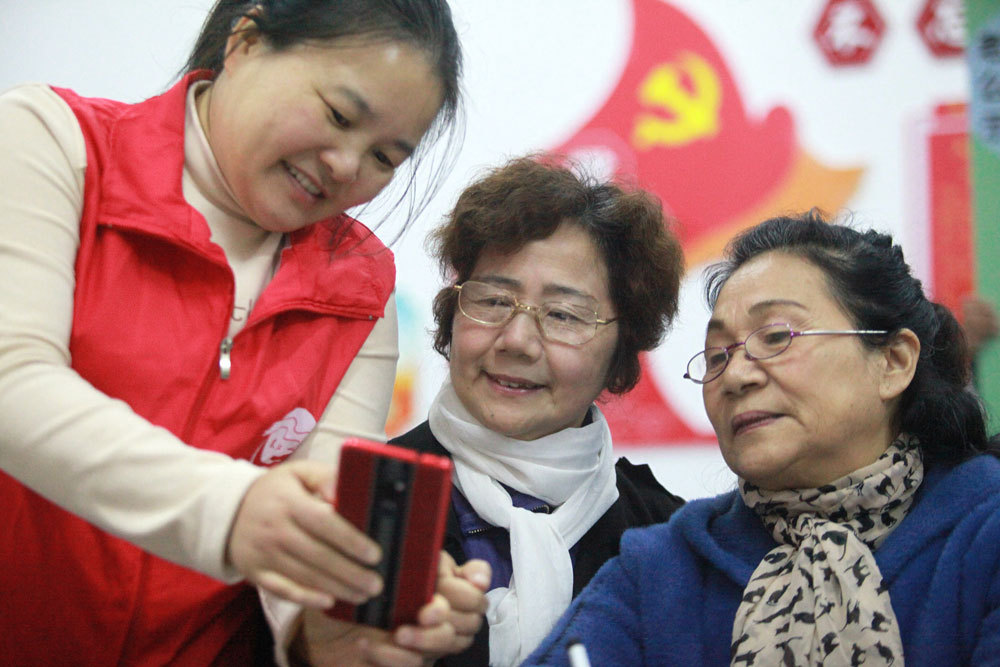 A social worker shows seniors at a neighborhood in Yangzhou, Jiangsu province, how to use a smartphone. MENG DELONG/FOR CHINA DAILY

Liu Qingzhong, who is in his 70s, used to feel embarrassed when he wanted to pay water and electricity bills, buy railway tickets or book a hospital appointment, because he didn't know how to use a smartphone.

Sensing that he was being "left behind", he decided to master the new technology.

"I had my first smartphone about eight years ago, but it can be difficult for older people to understand the instructions," Liu said.

"I had to ask my children or people who had the time to help me, which was not very convenient or efficient. It was also difficult for me to use the phone, especially with my eyesight possibly fading, poor hearing and bad memory."

Liu noticed that, like himself, many elderly people who were clearly struggling to keep pace with the digital transformation used to pay with cash and make medical appointments by visiting a hospital and speaking to a receptionist.

He once saw a man in his 60s living in his neighborhood in the western Beijing district of Shijingshan remove the battery from his electric bike and take it home to charge every day.

Liu wondered why the man failed to use charging points in the neighborhood, later learning that it was because he didn't know how to use his smartphone to pay for the service.

"I've experienced similar challenges, so I understand how hard it can be for older people to use smartphones and for them to learn how these digital devices function," Liu said.

He taught himself to master his smartphone in 2017, and now uses it to make calls, send text messages, shop online, book tickets for events and visit social media platforms.

Liu, a former engineer, wanted to share his experience of learning to use a smartphone. He compiled a list of instructions for older users, along with his colleague Li Guangyuan. Both of them work at the Sailande Social Work Office, a nonprofit organization offering community services in Shijingshan.

The instructions they drew up for older people run to about 100 pages and include pictures and big print for easy reading.

Li Guangyuan, a full-time worker with the office in his early 40s, collaborated with Liu Qingzhong on writing some of the instructions for using a smartphone.

They selected apps and programs commonly used in daily life to include in the instructions, including hospital registration apps, WeChat and apps for booking tickets for events.

Li said: "Liu asked questions about using a smartphone from the point of view of a senior, and I answered his questions by providing simple instructions. Then, we both discussed ways to explain these instructions to other seniors."

He added that it took them about six months to finish the compilation.

"It is easy for them (seniors) to forget the instructions, and it all depends on them gradually remembering ways to use these apps through practice," Li said.

Since 2017, Liu and Li have taught seniors in more than 80 communities in Shijingshan to use smartphones.

"Older people found it hard to adapt to smartphones being used widely to access services aimed at containing and stopping the virus spreading," Liu said.

For example, digital QR health codes, which show a person's travel history, are required to enter venues such as shopping malls, supermarkets and banks. Before going to the hospital, patients need to make appointments on mobile phone apps.