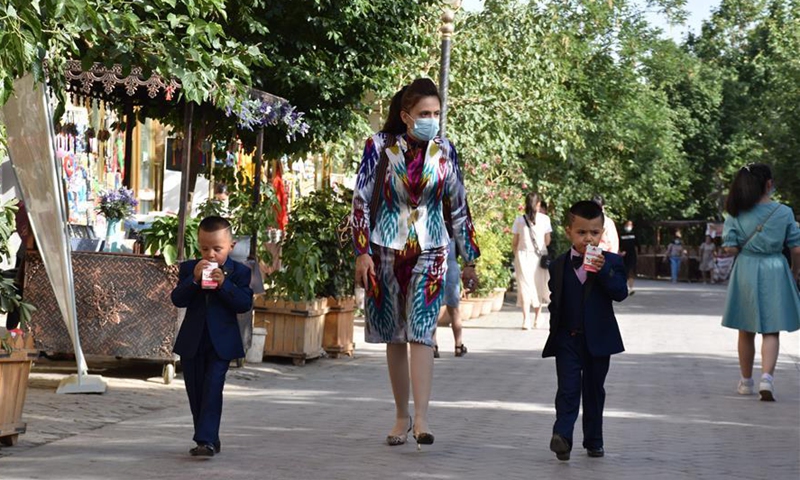 "As all the trainees have left the centers, how can there be risks of large scale infection?" a senior official from Northwest China's Xinjiang Uygur Autonomous Region asked at a press conference on Monday, in response to recent rumors of a "large scale COVID-19 outbreak" in Xinjiang's vocational training and education centers.

Mutalif Rozi, director of the Xinjiang Regional Health Commission, told the press conference on Monday that overseas "East Turkistan" forces recently colluded with some American and Western anti-China politicians to politicize the COVID-19 pandemic and incite all parties to "hold China accountable" for "being the origin" of the virus.

Overseas "East Turkistan" forces had spread lies of "Xinjiang eliminating Muslims using COVID-19" and claimed "there is the risk of large-scale outbreaks in Xinjiang's training centers."

Shohrat Zakir, governor of the Xinjiang Uygur Autonomous Region, announced in a news release on December 9, 2019, that all trainees had left the centers after completing their courses. "Since all the trainees have left the centers, how can there be risks of large scale infection?" Mutalif asked.

The despicable actions of the "East Turkistan" forces proved nothing but their flattering mentality and vicious intention acting as a cat's-paw of the US-led Western anti-China forces, the official said.

Mutalif noted that the coronavirus is a common enemy of all mankind that respects no borders and could appear anywhere. China has been hit by the virus just like other countries. Xinjiang has made the greatest efforts to win the battle of epidemic prevention and control through improved and intensified preventive measures.

There were 76 confirmed cases in Xinjiang, and no new cases have been reported for more than 100 consecutive days. Social and economic life in Xinjiang region has gradually gone back to the right track, actually much earlier than the rest of the country, according to Mutalif.

Moreover, under the unified arrangements from China's central authorities, local governments in Xinjiang, enterprises and non-governmental organizations have donated medical supplies to many countries, regions and international organizations.

Xinjiang also sent medical teams to Pakistan, Kazakhstan and Kyrgyzstan to support them in their efforts to defeat the virus.

The "East Turkistan" forces have smeared our efforts in global anti-pandemic cooperation, slandered our firm support in the battle against the pandemic for the international community, and undermined international cooperation in fighting COVID-19. "What are they up to?" Mutalif asked.

"We believe their ugly actions and malicious intentions will be known and rejected by the international community," he said.