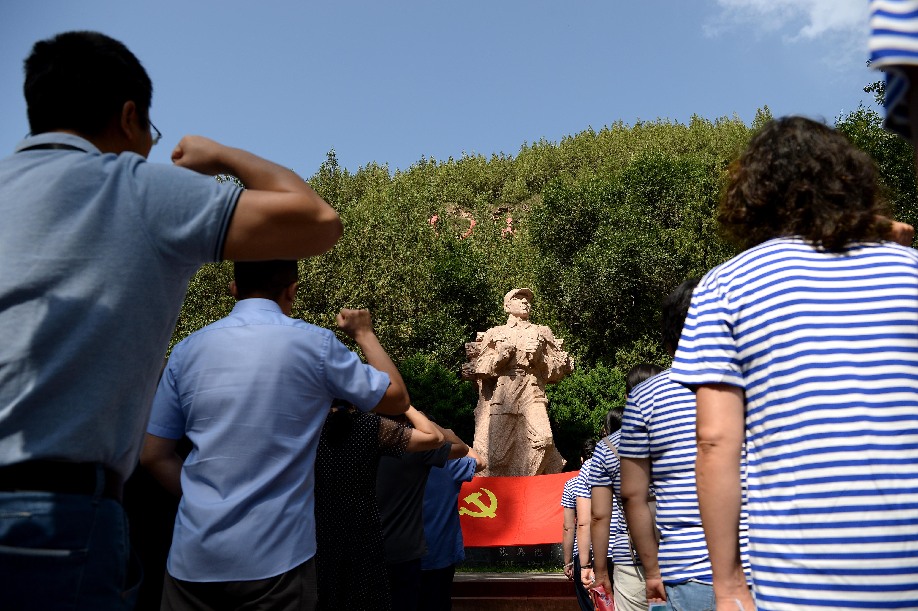 Visitors review the oath of the Communist Party of China in front of the memorial statue of Zhang Side in Yan'an, northwest China's Shaanxi Province, Aug. 1, 2019. (Photo: Xinhua)

XI'AN, Aug. 11 (Xinhua) -- Serving the people wholeheartedly -- this is the motto of the Communist Party of China (CPC), the world's largest ruling party.

In an education campaign themed "stay true to our founding mission", which has been carried out nationwide in May, all CPC members and officials are required to bear in mind the phrase and act accordingly.

The expression "serving the people" originated from a speech by late Chinese leader Mao Zedong in September 1944 in memory of a soldier, Zhang Side, renowned for his lofty morality of serving the people wholeheartedly and sacrificing for the benefits of the people.

The speech has a profound impact on the history of the CPC, and "serving the people wholeheartedly" became the fundamental purpose of the Party.

Seventy-five years on, Zhang Side's stories have been eulogized by generations of Chinese, and his spirit has been passed on.

Born in an impoverished peasant family in Sichuan Province in 1915, Zhang Side joined the New Fourth Army in 1933 and the CPC four years later. Throughout the Long March, Zhang fought bravely in battles and was injured several times. He also worked very hard while in Yan'an, a revolutionary base of the CPC in the 1940s.

On September 5, 1944, Zhang was working in a kiln with several soldiers but suddenly, the kiln collapsed. Zhang pushed a soldier out of the kiln resulting in him being buried. He died at the age of 29.

He has been remembered by the Chinese people since then. A memorial square was set up in Yan'an in honor of Zhang, and hundreds of visitors from all walks of life come to honor him every day.

Hou's father-in-law was in the CPC's army and took part in the production campaigns in Yan'an in the 1940s. The military and civilians were encouraged to reclaim farmland from the uncultivated land to become self-reliant in the grain supply, as well as other necessities of life.

"'Serving the people' was a motto of my father-in-law, which has also significantly influenced his offspring," said Hou. Before her retirement, Hou was an avid tree planter in the local reforestation drive.

"People have different needs at different times. 'Serving the people' is to put into practice the Party's mass line in all aspects of governance," Gu added.

As the revolutionary base of the CPC, Yan'an receives more than 300,000 CPC members every year to receive education. "Serving the people" is a must-have course.

"Zhang Side is a model who can represent the image of the CPC, solving people's problems and bringing the Party members and the masses closer," said Tan Huwa, an expert with Yan'an University.

"In the new era, 'serving the people' embodies the victory in the war against poverty and in building a moderately prosperous society in all respects," Tan said.

Zhang Yangang is the Party secretary of Xinhu Village in Shaanxi Province. The grassroots official knew about Zhang Side's good deeds when he was a child, which inspired him to change the poor and backward village.

By the early 1990s, Xinhu Village had no electricity or water supply. Villagers made a living by growing crops.

"As an official, I shoulder the responsibility to bring benefits for the villagers," said Zhang, who led the village committee to build power and water supply networks and explored ways to increase villagers' income.

More than 670 households in Xinhu have been lifted out of poverty over the past few years. And the per capita income of the village has exceeded 30,000 yuan (about 4,250 U.S. dollars).

"No matter how low your rank is, you must always remember to work for the people, taking effective measures to address their concerns," said Zhang.

Wuqi County had long suffered from fragile environment, severe desertification and natural disasters. Hao was shocked by the barren mountains when he first arrived at the county in 1995.

Hao encouraged locals to breed goats in captivity to restore the ecological environment. However, his suggestion drew ire in the local people.

Hao remembered that a farmer threatened to herd his goats to Hao's office if grazing on the mountains was forbidden.

Hao used every occasion he could to explain the policy to the people and eventually people agreed to participate in the captive breeding program.

"Working for the people means you can not make rash decisions. Once the herding ban issued, we immediately started to give subsidies, provide training, and help build facilities for herb and mushroom plantation to increase earning," said Gao Zengpeng, then vice director of the county's animal husbandry bureau.

After two decades of development, the forest and grass coverage rate in Wuqi increased from 19.2 percent in 1997 to 72.9 percent. Locals' disposable income also grew by 12 times during the same period.

"I made the proposal but I could by no means take the credit. The people are real heroes who can enforce changes. It is exactly because of their doubts and criticism that we can modify and refine policies to achieve the desired goal," Hao said.

The report delivered at the 19th National Congress of the CPC stressed clearly that the original aspiration and mission of Chinese communists is to seek happiness for the Chinese people and rejuvenation of the Chinese nation.

"The Party's original aspiration and the mission have never changed, though the times are changing. This is why the CPC can lead the Chinese people from one victory to another," Tan said.