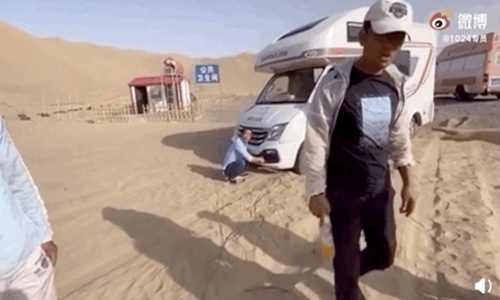 Seven suspects were charged after setting up a "toilet trap" in a scenic spot in Dunhuang, Northwest China's Gansu Province, forcing tourists to pay a massive towing fee once their cars became trapped in the desert. Five suspects involved in the case have been caught and part of the total amount of money has been returned.

Police investigated the "toilet trap" in September after some netizens revealed that the scenic spot had a public toilet in the desert which charged tourists exorbitant prices to tow their cars when their vehicles got trapped.

The public toilet has been ordered to close for rectification; and the first batch of 36 tourists were refunded their fees, totaling 11,440 yuan($1,751).

In a video online, bypassing tourists who stopped by to lift trapped vehicles were stopped by the toilet's operators, who said that trapped tourists can only use a paid towing service, which ranged from 500 to 3,000 yuan, according to media reports.

Many netizens who had been to the scenic spot also claimed to have had similar experiences, complaining that they were not given the keys to the toilet until they agreed to pay the specified amount of money.

The incident raised heated discussions online, with many netizens suggesting that stopping the rescue of other people is an act of extortion.