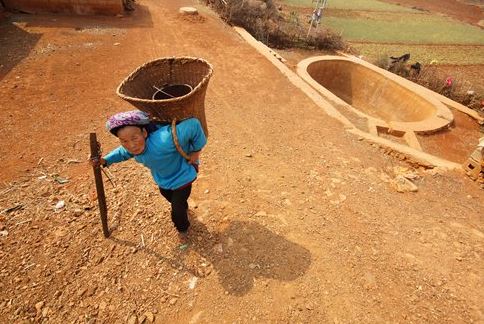 A city government in Southwest China's Yunnan Province began to investigate a village drinking water system which reportedly never functioned since it was built in 2010 and has affected 240 families.

The government of Xuanwei, Yunnan Province formed an investigation team after media uncovered an empty reservoir in Jiuwu village in Xuanwei.

Villagers had to walk a long way to get water for daily use, media reported.

The government had promised Jiuwu village residents it would divert clean water to the reservoir, and asked them to dig channels and lay water pipes. Each household also paid for a water meter. But the system never sent water, even elderly people and children had to walk for an hour twice a day to fetch water.

A total of 240 families were reportedly affected, according to CCTV.

An official from the Xuanwei government's discipline inspection bureau on Wednesday told the Global Times that government chiefs have gone to the village to verify the situation. She declined to provide more details on the investigation.

Jiuwu is not the only village in Xuanwei facing such a problem. A woman surnamed Bao from Deji village said that her family was mobilized to construct the water system five years ago. "But water never ran through the pipe and my parents in their 50s have to walk about five kilometers every day and return with heavy buckets," Bao said.

Another villager from nearby Malong village reached by Global Times also said drinking water in his village contains mud, twigs and insects.

The Xuanwei government held a meeting last week to speed up the construction of the drinking water project, requiring water security projects in all villages to be completed by August.