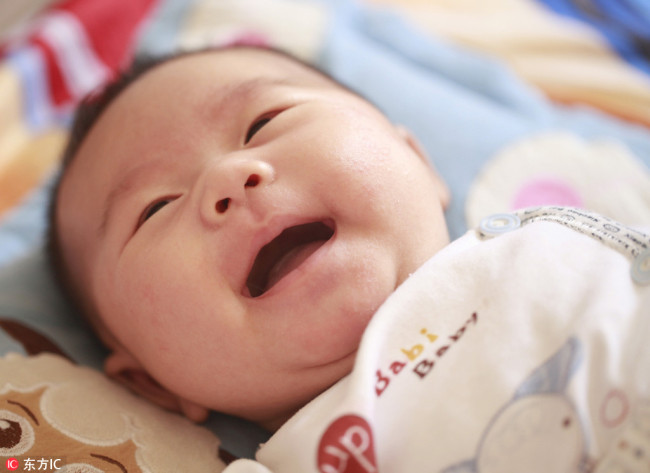 Births in Shandong province－a barometer of the national birth trend－are believed to have slumped last year, following a baby boom, lending credence to projections of a substantial drop in China's total births.

"The number of births in Shandong in 2018 is expected to have fallen by 15 to 20 percent. The proportion of second children is also likely to have shrunk," said Cui Shuyi, head of the population research institute at the Shandong Academy of Social Sciences.

Shandong has established a reputation for fertility in recent years, with new births－following the change of family planning policy in late 2015－accounting for more than 10 percent of China's total births in 2016 and 2017.

More than 63 percent of the babies born in Shandong in 2016 were second children, with the percentage rising to almost 67 percent in 2017, according to the provincial health authority. The national ratio was around 50 percent.

Cui said the trend of second children outnumbering first children in Shandong will fade soon, given that most women who planned to have a second child did so soon after the policy's implementation.

His prediction aligns with data released by local authorities in Shandong. From January to November, the city of Qingdao recorded a year-on-year drop of about 20 percent in newborns, and the number of second children born fell by 29 percent, the municipal government said in mid-December.

Liaocheng, in the western part of the province, logged a 26 percent year-on-year decrease in newborns from January to November－23,179 fewer babies－and the number of children born to families who already had a child dropped by nearly 36 percent, the city's health commission said last month.

Other major cities with populations of more than 5 million, including Yantai, Dezhou and Weifang, also reported declines in births－ranging from 16 to 22 percent－in the first half of 2018.

The widespread decrease in births across Shandong has renewed concerns about a substantial drop in births nationwide last year.

In November, Zhai Zhenwu, president of the China Population Association, said the number of births in China was expected to decrease in 2018, as part of an inevitable trend following rapid economic and societal development.

On Jan 3, Huang Kuangshi, a researcher at the China Population and Development Research Center, said the number of newborns for 2018 would be between 15 million and 16 million－a drop of more than 1 million from the previous year.

Their forecasts seem to be supported by the figures from Shandong, Cui said.

"The province has always thoroughly implemented the country's family planning agenda, from the one-child limit to the second-child rule that came into force in recent years," he said. "Thus, its shift in fertility is representative of the country's situation."

In response to a question from a reporter at a news conference on Friday referring to a demographer's estimate that the number of births may have fallen by as much as 2 million last year, the National Health Commission said it is closely monitoring population fluctuations and will intensify research on birthrates.

It added that the authorities will release official data from last year soon.

Tao Tao, a population researcher at Renmin University of China, said a shrinking pool of women of childbearing age has contributed to the declining birthrate.

Tao said the average ages of women bearing their first and second child have both risen by one year over the past three years, which also affected fertility.

"Since 2000, the newborn population has been fluctuating between 15 and 18 million," she said. "We should take an objective view of last year's figure in the long run."

Wang Xiaodong contributed to this story.