Geographically and economically, Shandong province－which is China's third-largest provincial economy, after Guangdong and Jiangsu, and has the most complete industrial structure among all provincial regions－holds a strategic spot between the north and the south of the country as the development gap between the areas widens.

Over the past three years, the province has been making unswerving efforts to carry out the central authorities' directive that local governments bear in mind the nation's plan to form and implement a new development paradigm－dual circulation, through which China is planning to boost domestic circulation while maintaining its opening-up endeavors.

President Xi Jinping has stressed that places with better development foundations can take the lead in exploring the formation of dual circulation. Shandong has taken the initiative to do so by pursuing high-quality development.

The wide application of information technology at the Jinlan logistics market in the Lanshan district of Linyi, Shandong, is a good example of how the progress of technology can help modernize the development of a traditional industry in the city. 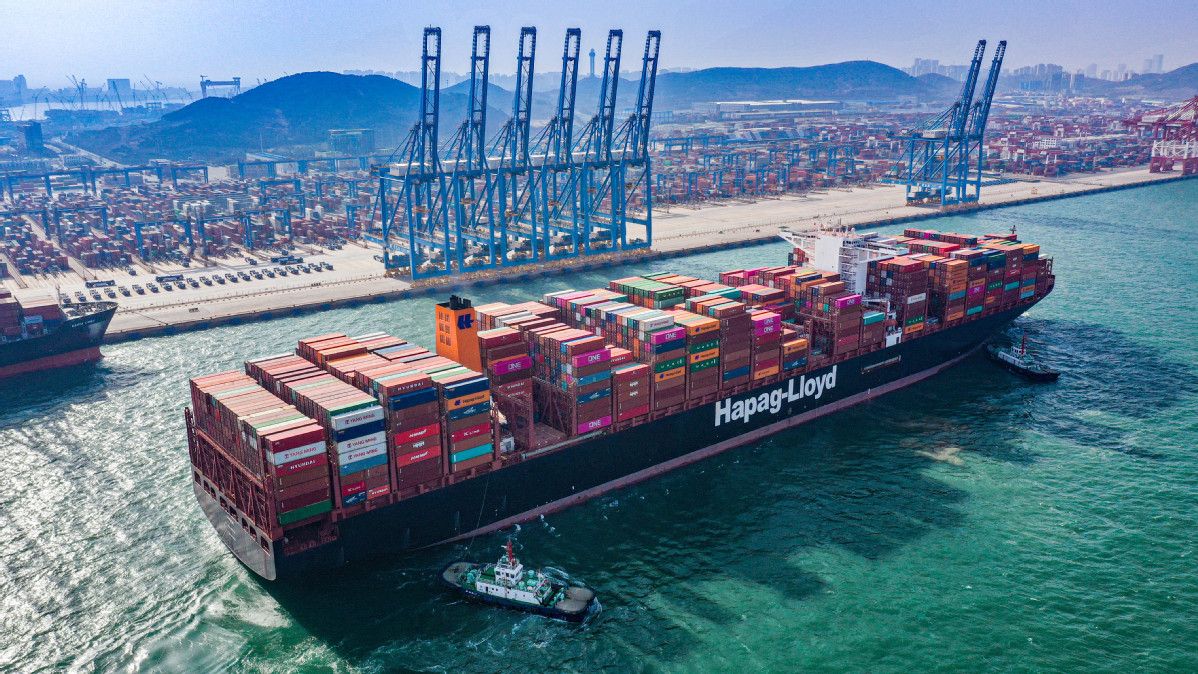 Qingdao Port of Shandong Port Group in February. Automation has played a key role in increasing efficiency and safety at the port. (Photo: China Daily)

Xi paid an inspection visit to the logistics market on Nov 25, 2013, during which he urged operators to strengthen their efforts, advance with the times, explore pluralistic development and modernize the logistics industry.

According to Wang Shiling, president of Lantian Group, operator of the market, the company has invested 86 million yuan ($13.2 million) building the logistics information center of the market that shares data with more than 2,000 cities and towns in the country, maximizing logistical efficiency.

Lanshan has been accelerating the development of its logistics industry since 2019, when Linyi was recognized as a national logistics hub and as the province's Belt and Road comprehensive pilot zone. Linyi is trying to integrate with the new development paradigm, with domestic circulation as the main component featuring mutual reinforcement of both domestic and international dual circulations.

More than 800 trucks leave Linyi each day on average, and the annual sum of its logistics industry's business transactions has increased from 26 billion yuan in 2013 to 73 billion yuan last year.

As the transformation of Linyi's logistics industry indicates, Shandong has achieved initial success in replacing old growth drivers with new ones.

Some researchers say that Shandong is the epitome of China's economic transformation, as it not only has some foundation and developmental strengths that are typical in developed provincial economies in the south, but also faces structural difficulties that have bound the hands and feet of the north. In addition, Shandong not only has the geographical advantages as a coastal province, it has also confronted problems such as underperforming Rust Belt industries and resource exhaustion.

That's why central authorities require the province to constantly increase the quality and the efficiency of its economic growth and explore ways to replace old growth drivers with new ones to benefit the whole country.

The nation's 14th Five-Year Plan (2021-25) has clearly pointed out that Shandong should weed out its backward growth drivers, upgrade its traditional ones and cultivate new ones.

Liu Bing, vice-president of Shandong Technology and Business University, said the 10 sectors comprise the province's leading and competitive industries, emerging industries with great potential and those focusing on people's livelihoods.

The province's core task is to take advantage of the ongoing technological revolution to cultivate new growth, upgrade the industries and build a modern industrial system with the 10 aforementioned industries as its foundation.

Since the province identified the 10 key industries in 2018, tremendous efforts have been made to boost their development. Their proportion in the province's GDP has remained above 50 percent since that time.

Shandong Party chief Liu Jiayi said, "If we still hold the old steamer ticket featuring the old development model and industrial structure, we will never board the giant ship of high-quality development, and we will be a big encumbrance to the country in growth, energy saving and emissions reduction and regional coordinated development."

Liu made those remarks at a mobilization meeting the province held in February 2018, during which, as many local civil servants have told the media, Liu sent out an unequivocal message that although Shandong acknowledges the gap between its status quo and high-quality development, it is not resigned to it, and the province has no choice but to fight for improvement.

Over the past three years, the province has shut down more than 110,000 polluting enterprises that cannot meet the province's requirements for high-quality industrial development. The number of chemical industrial parks has decreased from 199 to 84 since 2018.