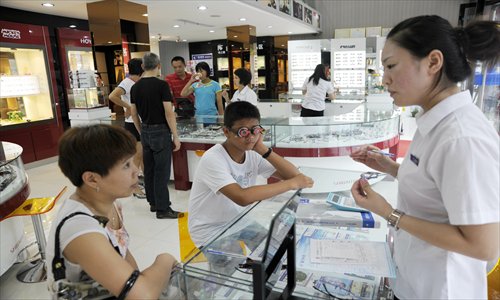 Government officials from East China's Shandong Province face a penalty if they fail to reduce the myopia rate in young children and teenagers in the province, which has been added to this year's government performance appraisal. The provincial government will warn city and county governments, and schools which do not achieve the annual goal. Local governments and schools which fail to reduce the myopia rate among teenagers for three consecutive years will be penalized, according to a provincial education department announcement on Tuesday. "Officials in charge of the matter who do not meet the goal might lose the opportunity of getting promoted within half a year," an employee surnamed Zhang from the Shandong Provincial Education Department told the Global Times on Wednesday.The announcement said the myopia rate of children and teenagers in Shandong is expected to drop by more than 0.5 percentage points per year by 2023.The myopia rate among 6-year-olds is expected to drop by about 3 percent, and the myopia rates of primary school, junior high school and senior high school students are expected to drop below 38 percent, 60 percent and 70 percent, respectively, by 2030. Physical fitness standards need to be more than 25 percent by 2030, the announcement said."We intend to cooperate with universities in Shandong Province to enroll students majoring in ophthalmology and cultivate excellent professionals in the field. The qualified graduates can be hired by primary and secondary schools to help students with their eye health," Zhang said. "I totally support the announcement because I attach great importance to my child's myopia condition. I hope that the school takes concrete measures to help children maintain eye health," a woman surnamed Wang in Weihai, Shandong Province, with a 10-year-old daughter told the Global Times on Wednesday.China's National Health Commission (NHC) said 53.6 percent of Chinese children and teenagers suffer from myopia, according to a survey released by NHC at a press conference in April.