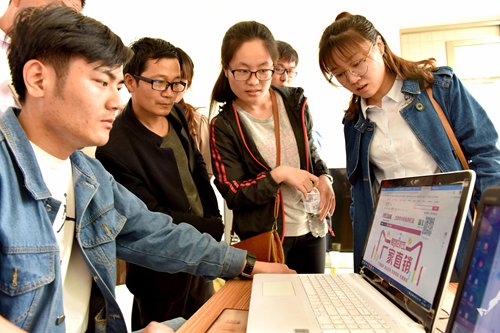 Many netizens admired the salary the business is offering rural women to create online content. However, some also criticized the business for pursuing profit rather than quality.

Li Chuanshuai, founder of the Boyan Culture WeMedia business in Limiao village in Ji'nan, captial of Shandong Province, has registered several hundreds of social media accounts on various Chinese social media platforms including WeChat, and his business has generated around 1 million yuan ($146,000) annually for his fellow villagers, the Ji'nan Daily reported in early August.

More than 20 female villagers who have to stay at home taking care of their families are employed by Li. The job offers them an opportunity to improve their life.

Li Fangyong, Party secretary of Limiao village, told the Global Times on Tuesday that the village supports Li Chuanshuai's social media business, as it offers a stable job to female villagers who have difficulties in life.

Employees in Li's business watch the latest popular TV dramas, pull a clip from them and post the video clip on the company's social media accounts with short and plain comments.

They also post videos or articles about life in the village, including videos of how to make salted duck eggs or photos of what a village courtyard looks like.

Their work is described in a video clip published on Pear Video, an online video platform for short videos, on Tuesday.

Before publishing, the villagers' work goes through an article examination system Li created himself to make sure the content follows government rules and is not plagiarized.

At the bottom of each article, they post an advertisement. The amount of money they earn depends on the number of views of the article, Li told the Ji'nan Daily.

Li, 28, was a farmer before entering the social media industry in 2015. He registered a social media account and earned his first pot of gold of 3,000 yuan in 2016 after writing an article that was viewed over 1 million times. He then opened his social media business.

"At first, villagers had doubts about Li Chuanshuai's social media business, and some even asked me whether he was trying to defraud people," Li Fangyong said.

He said that many women in Li Chuanshuai's office now have a stable job with a monthly payment of up to 16,000 yuan.

Li's business also helps the local government with poverty alleviation. Li  said that he posted a link to purchase local watermelons in one of his articles published on social media, and orders came in from across the country.

Li has also started a social media training course. Party secretaries of villages in other provinces have come to him for training.

The video clip about Li and his office published on Pear Video on Tuesday has received 6 million views as of press time.

Many netizens questioned the integrity of Li's social media operation, and said that its products were merely for click rates and money. They worried more of such social media content would greatly reduce the quality of China's social media landscape.

Li repsonded, "We are only writing stories about villages, and we don't make up stories or exaggerate them."

Liu Chengliang, a research fellow of the China Rural Governance Research Center at Huazhong University of Science and Technology, told the Global Times Tuesday that the labor force in China's villages has not been fully unleashed, because females have to take care of their families by staying in the village instead of seeking jobs in cities like their husbands do.

Thus Li's social media office offers a job opportunity to these women, and also helps the country to expand its workforce, Liu said.

"But Li Chuanshuai's social media is not suitable to be emulated in all the villages in China," Liu said. He explained that writing articles for social media requires a certain level of knowledge, which most women living in villages do not possess.