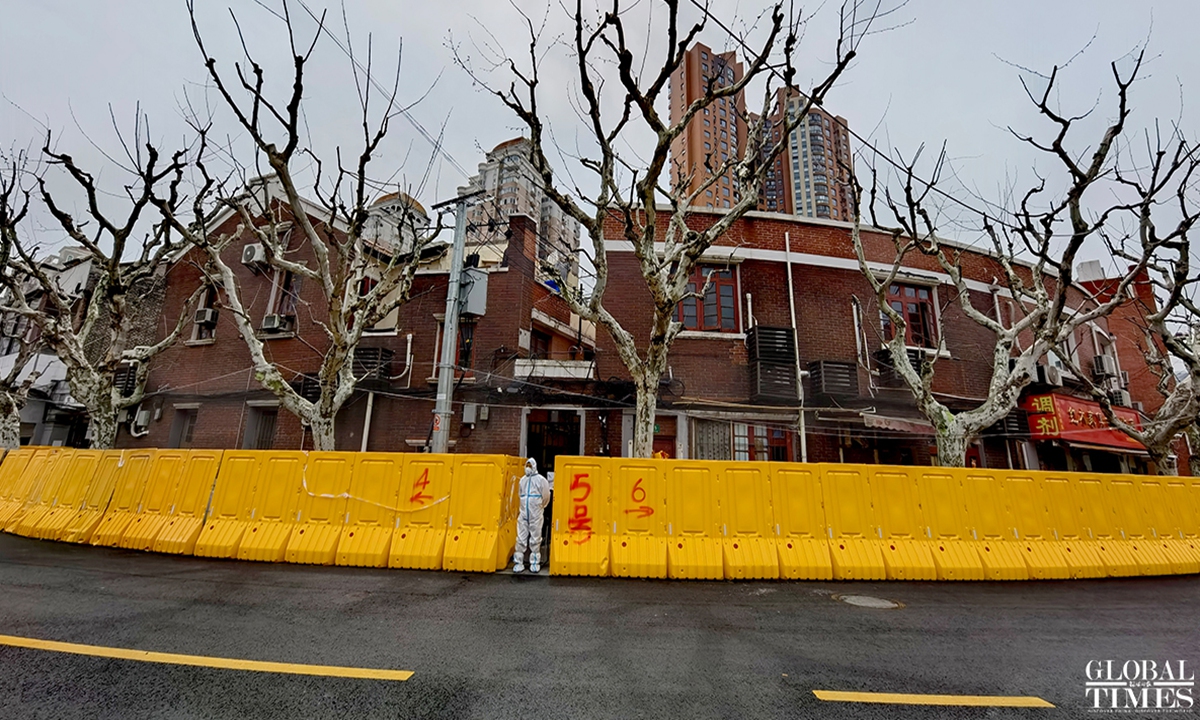 On Kangding road, Jing'an district of Shanghai, street barriers are placed to manage traffic outside the neighborhood communities. Some residents were jogging, while sanitation workers were busy collecting garbage. (Photo: Hu Gong)

At a press conference on Thursday, Shanghai authorities said they failed to thoroughly prepare for the recent outbreak that's been battering the city. The authorities said previous epidemic prevention and control measures were not fully implemented, and the city has upgraded the directing mechanism and established six special working groups to focus on specific tasks to strengthen efforts.

Ma Chunlei, secretary general of Shanghai Municipal People's Government, confessed during the press conference that officials had insufficient understanding of the highly infectious and latent Omicron variant and made inadequate preparation for the dramatic increase in the number of infections.

The secretary general said they failed to carry out and implement sufficient prevention and control measures, and made inadequate guarantee to people's livelihood in sealed-off areas.

"We sincerely accept your criticism and are endeavoring to make improvements," Ma said.

Ma, representing local authorities, expressed appreciation to neighboring and other provinces' timely support. Ma described the assistance as significant as the city faces its toughest battle against COVID-19 since the epidemic began. He promised to bear in mind the great kindness.

He also expressed his appreciation to the frontier epidemic prevention and control workers including medical workers, CDC workers, grassroots officials, police officers, community workers and volunteers who have been working painstakingly round-the-clock over the past month.

The city registered 355 confirmed local cases and 5,298 asymptomatic infections on Wednesday. The daily numbers of confirmed patients and asymptomatic carriers reported have been spiking since the eastern side of the Huangpu River in Shanghai was placed under strict sealed-off control. City-wide nucleic acid testing and antigen self-testing are being conducted in the area.

According to Ma, in response to the problems revealed by the previous rounds of nucleic acid screening, the authority has strengthened the directing mechanism and established six special working groups to focus on tasks such as constructing quarantine sites, securing daily necessities and responding to residents' demands.

The authority is also stepping up the transferring and isolation of infected persons to minimize the time they spend in the community.

The authority will work out a scientific and reasonable scheme to ease the control of sealed-off areas in Pudong, Punan and neighboring areas based on the mass nucleic acid screening results and the national expert team's opinions.

From Friday, a mass nucleic acid screening will be rolled out in Puxi, the area at the west side of the Huangpu River in Shanghai, which has a population of over 16 million people within 12 districts. As the situation is complicated in this area, officials will do all they can to speed up nucleic acid screening.

Meanwhile, all the metro services, public transportation, taxi and car-hailing services in Puxi will be suspended between April 1 and 4 except for a few airport bus lines and taxis granted with special passes.

"Shanghai is at a crucial stage in the battle against the epidemic. What we need most is the understanding and support from all the residents, the confidence and persistence of the city's epidemic prevention team, the responsibilities of Party members and officials. We have the confidence, determination and ability to win the battle against the epidemic with the support of the city's 25 million residents, and the normal life will come back," Ma said.