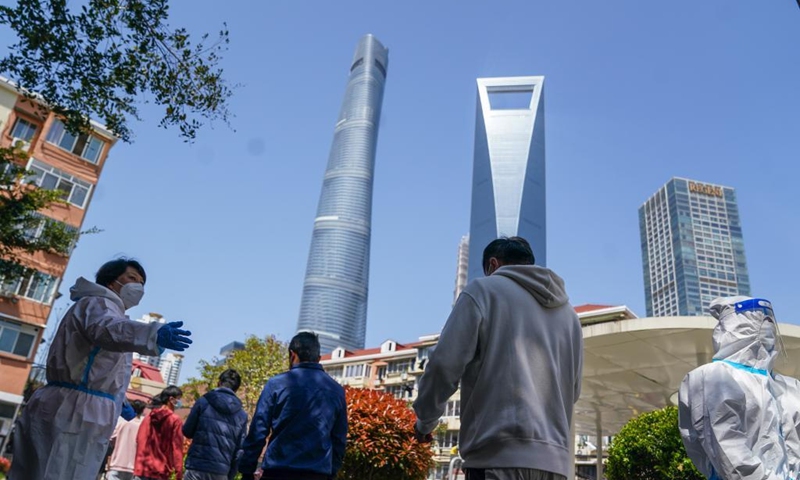 With 38,000-plus-member medical support teams from 15 Chinese regions rushing into the city, Shanghai has stepped up efforts in the most arduous battle against one of the worst COVID-19 outbreaks since Wuhan, where the virus was first detected in late 2019, with lessons and improvements over past two years.

Medical experts believe the latest outbreak in Shanghai is larger in scale than in Wuhan in early 2020 but less severe and with less direct losses given increased knowledge in the virus and accumulated experience in mobilizing resources and improved diagnosis capacity and more dynamic and targeted treatment methods.

So far in Shanghai, there has not yet emerged a single severe case, not even a fatality, which was regarded as one of the most obvious successes in comparison with the outbreak in Wuhan which recorded 3,869 COVID-19 deaths as of mid-April 2020.

"The infectivity of the current strain is at its highest over past two years, several times higher than that of Wuhan outbreak, creating more infection. But with vaccination rates over 80 percent, the severity of the disease is much milder than it was," Zhuang Shilihe, a Guangzhou-based medical expert, told the Global Times.

Experts and residents recognized apparently improved diagnostic capacity and efficiency in this wave in Shanghai, as well as more diversified, pragmatic and targeted treatment methods.

In terms of the ability to contain outbreaks, Shanghai is far better equipped than Wuhan two years ago, Wang Guangfa, a Beijing-based respiratory expert, told the Global Times on Monday. Because of the lack of screening capacity, Wuhan was not in a position to conduct city-wide screening in early stages, but instead required residents to isolate themselves and then be tested if they showed symptoms, said Wang.

Shanghai, a city of 25 million residents, completed a city-wide COVID-19 testing rollout as of Monday evening, according to health authorities, which many believed was almost impossible to achieve in early outbreaks in Wuhan.

A doctor surnamed Jiang from Shanghai's Songjiang district told the Global Times on Monday that she and her colleagues set off at 3:30 am in the morning to take nucleic acid samples at designated communities. "Over the past week, each of our colleagues usually need to take samples for around 2,000 people in the morning and 5,000 a day," she said.

Before Monday's mass testing, the city conducted a citywide antigen testing on Sunday.

Centralized quarantine for cases with mild symptoms is another major adjustment compared to that of Wuhan outbreaks, experts noted.

China has recently updated its diagnosis and treatment playbook for COVID-19, including isolating mild cases rather than taking them to hospitals, changing the criteria for patients to be discharged from hospitals and adding antigen testing for detection.

"Two years later, we have more dynamic and practical measures in treating positive cases. When a large number of mild or asymptomatic cases appear, it is better to send them in makeshift hospitals to avoid breakdown of the hospital medial system," Zhuang said.

This shows that the country is exploring more flexible and scientific treatment programs to achieve the balance of overall medical resources, Zhuang said.

Chen Erzhen, a Shanghai-based health official, also marked this outbreak wave in Shanghai with over 60,000 positive local cases as "larger in scale than that in Wuhan, but less severe due to improved preparations and accumulated experience" in a recent media interview.

The BA.2 mutant strain of Omicron has lower virulence but much higher transmission rate, bringing more asymptomatic infected people, a greater pressure and challenge for control, remarked Chen, vice president of Ruijin Hospital and head of Shanghai's centralized quarantine treatment team, who has previously led a medical assistance team to support the city of Wuhan in 2020.

He added that judging by the current situation, Shanghai has been handling the treatment of patients in a relatively smooth manner overall. 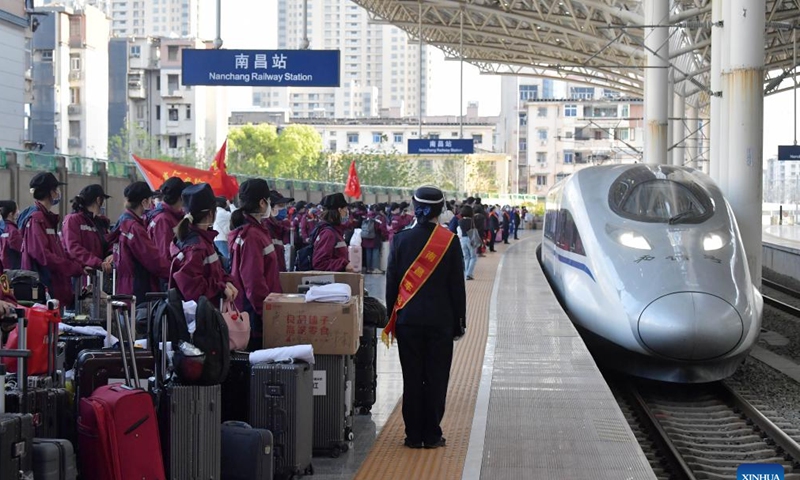 Medical workers wait to board a train to Shanghai at Nanchang Railway Station in Nanchang, east China's Jiangxi Province, April 3, 2022.

Over 38,000 medical workers from 15 provincial-level regions have been deployed to aid Shanghai in its Omicron battle so far, the largest number of nationwide medical aid since Wuhan in early 2020. Nine of the provinces and regions have sent more than 11,000 medical personnel to undertake the task of medical teams in makeshift hospitals, and four provinces have sent medical personnel for nucleic acid sampling.

Similar to what happened in Wuhan in 2020, PLA medical troops have participated in a series of tasks. China's military authorities on Sunday dispatched more than 2,000 medical staff to Shanghai. Medical staff were drawn from seven medical units affiliated with the army, navy and joint logistics support force.

PLA Western Theater Command Air Force posted photos of China's heavy transport Y-20 aircraft on Sina Weibo on Monday night, confirming its participation in the epidemic containment battle in Shanghai and encouraging the Chinese people to claim victory in the fight united as one.

"At present, we are no longer faced with the same predicament of material shortage as in Wuhan. And the two-year battle with the virus has greatly increased the awareness of health care workers about self-protection. Medical staff can be more professional whether it is protection measures or treatment measures," Wuhan-based frontline medical worker Li Wenhao who came to support Shanghai on Sunday told the Global Times.

"It used to be fear of an unknown virus, but now we know what we're up against, so feel more confident to fight against it, Tao Lina, a Shanghai-based medical observer, told the Global Times.

Moreover, the two-year national fight against the virus has inspired calls for continuously exploring new routes and attempts in national epidemic control and prevention, experts said.