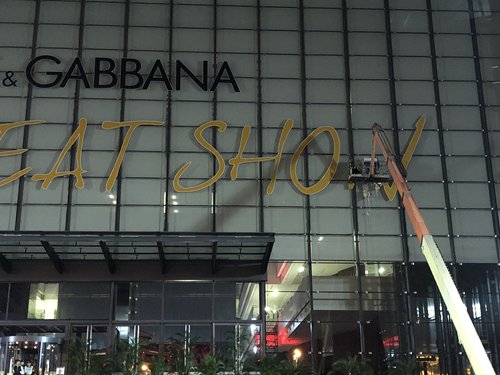 Workers in Shanghai remove the sign of Italian luxury brand Dolce & Gabbana's fashion show, The Great Show, Wednesday after the show was canceled. An online video allegedly showing the brand's co-founder and designer hurling insults at China hours before the scheduled start of the show. (Photo: Yang Hui/Global Times)

Staff members and models of the fashion show started to pack up their luggage and left the Shanghai Expo Centre, the venue where the fashion show was scheduled to be held, as of 4 pm on Wednesday afternoon.

A Chinese model told the Global Times that the show on Wednesday evening was canceled but no one had informed him of the time when the fashion show would be held. Outside the entrance to the expo center, the red carpet was covered by a plastic film.

Chinese celebrities including Zhang Ziyi, Li Bingbing, Chen Kun and Wang Junkai refused to attend the show after Chinese netizen @Fashion_BangZ exposed on Sina Weibo that Stefano Gabbana had a dispute with Chinese netizens on his Instagram account about a video which reportedly contained insults on China.

The dispute escalated, in which Gabbana claimed that "the country of shit is China" and "China Ignorant Dirty Smelling Mafia."

The post soon caused a stir on social media and was forwarded more than 16,000 times and had more than 5,000 comments as of noon Wednesday. Many Chinese netizens demanded that the brand "get out of China."

The incident stems from a promotion advert that the company released on its Sina Weibo, Instagram and Facebook accounts on Sunday.

In the video, "Eating with Chopsticks," chopsticks which symbolize Chinese traditional culture were combined with the classic Italian food pizza. However, the subtitle describes chopsticks as "stick-shaped cutlery."

A netizen named Mei Yanfang Myf said people from around the world would know that the "stick-shaped cutlery" is called "chopsticks."

Aside from the subtitles, the model's exaggerated facial expression when she uses chopsticks to eat pizza was also considered a form of discrimination against traditional Chinese culture.

When Chinese netizens expressed outrage over this video to Stefano Gabbana on Instagram, the designer insulted China.

After many Chinese celebrities withdrew from the show, Gabbana said on Instagram around 1 pm that his account was hacked and his legal office was working on the matter. He claimed that "I love China and Chinese culture. I'm so sorry for what happened."

But many Chinese netizens did not buy the excuse. They said Gabbana was sorry for the money the company would lose because of the incident.

The company later claimed that its Instagram account and Stefano Gabbana's Instagram account were both hacked. The company said it has started a legal procedure to resolve the problem, adding that it was sorry for the untrue remarks that influenced and hurt China and Chinese people. "We have always loved and respected China and Chinese culture," said a post on the company's Sina Weibo.