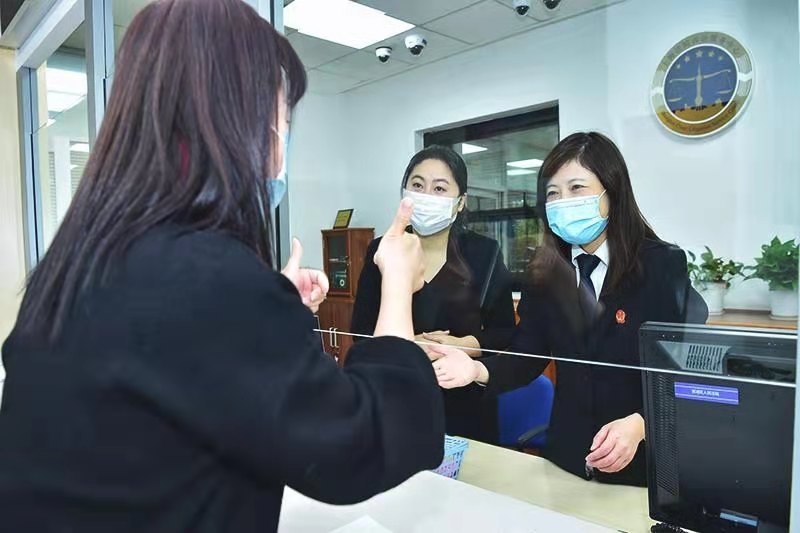 A court in Shanghai recently launched a cost-free sign-language service to help people with hearing difficulties initiate lawsuits and safeguard their rights and interests. (Photo: WHB.cn)

A court in Shanghai recently launched a cost-free sign-language service to help people with hearing difficulties initiate lawsuits and safeguard their rights and interests.

The pilot service was launched by Shanghai Huangpu District People's Court on Dec 3, which marked the International Day of People with Disabilities this year.

By the end of 2019, the city had about 578,000 disabled people, of whom 75,000 were registered as hearing impaired, according to the Shanghai Disabled Persons' Federation.

The court said that the new service was intended to help the "silent minority group" get better access to services when they require legal assistance.

A woman surnamed Xiong was the first to try the service at the court's litigation service center. She was at the center to help a friend, who also has a hearing problem, ask about the filing procedures for inheritance disputes. Volunteer Li Lin used sign language to communicate with Xiong and forwarded her queries to the judge, Cai Miaomiao.

Cai said people with hearing disabilities who previously visited the center had to use pens and paper in order to communicate.

"But when talking about complicated legal issues and relationships, it was hard to understand each other in this way," she said.

Shen Yinghua, head of the lawsuit filing tribunal at the court, said that people can either book the on-site service in advance or access signlanguage services via a video linkup.

The service is expected to be rolled out at more courts in the city if the pilot proves successful.

The introduction of the service was accompanied by online training classes for court employees.

The Shanghai Disabled Persons' Federation and the court have jointly developed teaching materials and a syllabus for the course.

On Dec 3, more than 100 employees from the city's courts participated in the online training. The training will cover the entire staff at the litigation service centers of the city's courts, including judges and police officers.

During the first class, they learned sign-language expressions for numbers, daily phrases and commonly used legal terms from a teacher at a school for children with hearing difficulties.

Cai said it may take time before she can communicate well with hearing-impaired individuals. "But in the first place, a simple sign-language greeting may allow them to feel our intention to break barriers and provide a good legal service," she said.